Obviously it's Not a Lack of Time....

So, I finally remembered I used to keep a blog.  Not that anyone has missed me.  I never had much of an audience- except the Russian spammers using me as a place to hide (or whatever it was).  I don't say that to whine about nobody reading.  Most of the people who did read are people I "see" in other places on the interwebs.  I've been saying for a few years now- as my posts have grown further and further apart- that it was just lack of time to make my posts as often as I used to.  Obviously- since we've all been in a sort of "pause" in our routines- that is not the case.  I have been furloughed for 102 days, and have not physically gone to work in 116 days! One might think I would have spent at least part of that time posting about all the great projects I was working on.  One would be mistaken.

In truth, I didn't work on a LOT of projects.  The first few weeks, I was a bit shell-shocked- kind of dazed and confused about the whole thing- worried about being unemployed and frightened I or someone in my family would get this illness.  Once I settled in to being home, I did start working on a few things and managed to finish a few UFOs.


Sometime in April or May, my guild cancelled our show for this October.  That kind of took the wind out of my sails, as the show was my incentive for getting a few things finished.   Between that and gardening season finally coming along (after a late and cold spring), I just stopped sewing altogether, except for a few masks here and there.   However, I have been knitting steadily, making many new friends!  Some have stayed here while others have gone on to new homes near and far. 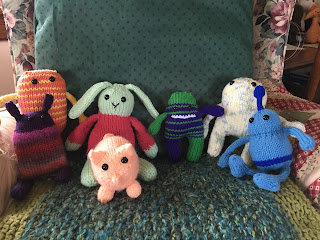 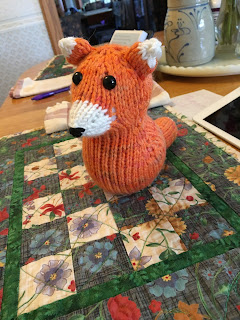 Sometime in either late March or Early April Johanna Basford began doing a daily live video tutorial- like she had done last year for Inky Art School- four days a week at around the same time.  My sad satellite internet doesn't allow me to enjoy live videos (or video chats with friends, or zoom meetings, or....), so I would wait until she was finished then watch the saved video (those will play because they can buffer to load on my devices).  This gave my days a bit of structure.  No matter what I was doing, I would stop and do my daily drawing or coloring.   And the time spent doing it gave me some time to quiet the thoughts and worries.


Things have gotten a little better.  I no longer fear going to the grocery store, but I will not be dining out any time soon.  I will be going back to work in a couple of weeks.  (I'm one of the lucky ones.  Many have no job to return to.)  I'm suffering some anxiety about being at work, in all honesty. We aren't done with this by a long shot.  But life goes on in different ways.
The one thing I know is that my blog is no longer something I feel the need to do.  I started it when I had time to fill (at work- two jobs ago).  I enjoyed doing it, and it gave me  place to record my projects.  I've referred back to it at times when I couldn't remember when or how I did something.  I may stop in from time to time- maybe I'll keep doing the year in review.  If you've been a "fan", I want to thank you for sticking with me and reading my mental meanderings.

Be safe, and remember to be grateful for the little things.
I am grateful for:
I saw a baby robin in the grass before I stepped on him, and put him back where his momma could find him.
The daylilies are blooming.
The classic movie channel- so far, the Ray Harryhausen day was my favorite!
Virtual hugs in so many forms.
I was doing sourdough before it was cool.


Posted by Martha Lorshbaugh at 3:07 PM