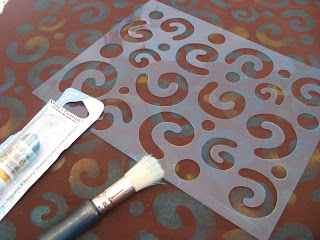 Last weekend was filled with things that are different from what I usually do. Not necessarily new but things I more or less had to do in a different way than I am accustomed to. 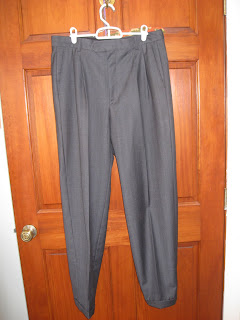 First, my son discovered some time ago that his suit pants had moth holes in them. He hadn't worn the suit in a while, and I didn't know it wasn't in the closet with the rest of the woolens. So it had two tiny holes in the back of one leg. Just big enough that you could see there were holes. Poor kid. So, it's Mom can you fix these? I have patched many pairs of blue jeans and elbows of flannel shirts. Those are easy! But you can't zigzag a patch on suit pants. My Grandmother knew how to do reweaving. How is it she never taught me this ancient lost technique???? I did find a guy who does it, but a new pair of pants would be cheaper! So, not one to give up easily, I decided to give it a shot. Having never seen it done, I could only guess, and sat there staring at the patch and the hole for a very long time before deciding I had no idea how to accomplish it. So I decided to try the next best thing; something in my quilting skill set: reverse applique. It had to be done with the raw edges, though as a turn under would show, right? So I found thread that matched pretty well, basted the patch inside the pant leg and went about weaving the new thread into the good fabric and sort of over the hole. It will pass most inspections, I think. 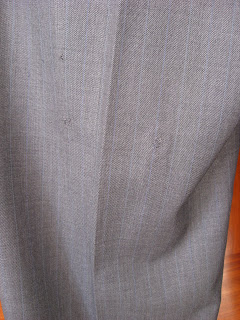 The next thing was stenciling on fabric. I did this once, and didn't particularly care for it, to be honest. It was not my idea to do it now, either. I am a "Scrap Therapist"- I teach classes in the Scrap Therapy series at Mt Pleasant Quilting Company The next project in the series is one that allows you to make a custom background fabric before you start using Shiva paintstiks! 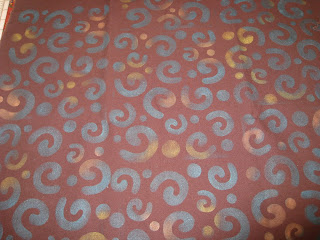 At first I thought why do I need to do this when there are so many wonderful fabrics in the world? But once I got the fabric painted, I really liked it and can't wait to see how the project looks when I am finished- hopefully this weekend.
This depends on me being able to find the tool to apply grommets. That guy got it completely backwards when he said "don't sweat the small stuff" It's the small stuff that gets to me!!! 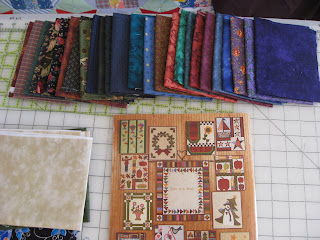 The online quilting community has a goal this year to finish things and use up our stashes. Toward that end, I have unearthed an old BOM I purchased in kit form several years ago. I don't know why I did it. I never buy kits because I like to choose my own fabrics. But there they are- a year's worth of wall hangings for every occasion, just waiting for me to open the bags and put them together. I opened the first one and found these fabrics. Not me at all, but some aren't bad. Pull out the yucky ones, and add some of the stuff in my scrap bins....
Ahh, much better! Now maybe I can find the enthusiasm to make this one! (if only I can find the time!) 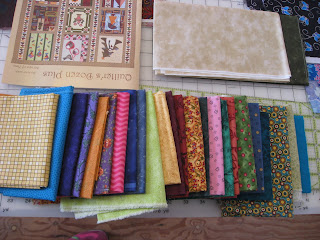 OK, somebody needs to explain to me how to get the damned pictures where I want them. ( This is why it used to take me so long to update the Guild's blog)
Posted by Martha Lorshbaugh at 2:58 PM