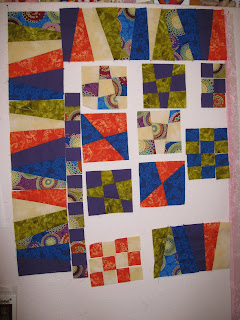 Last week, I decided to push all the "have to dos" off the sewing table and play! I had been wanting to try out the techniques in Kathy Schmidt's book, _Rule Breaking Quilts_. It's a bit like the "liberated" method I tried last spring, which was a lot of fun. So, using the first pattern in the book, which I believe was called "Jaywalking", I pieced this collection of stuff to play with. 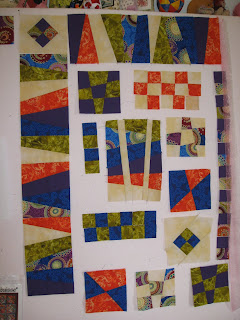 After "weegeeing"(Jane Sassaman's word) it around a bit, I decided to make a couple of changes, and add some other stuff.

I had sort of decided what shape I wanted it to be and this looked like enough to get me started. Using only the same fabrics I had cut up for my pieced sections, I started filling in the blanks. I have learned that I stink at figuring out how big things need to be to fit other things. You'd thing it was basic quiltmaking. But for some reason, I kept coming up short! From now on I plan to make them big and just cut them down if at all possible! 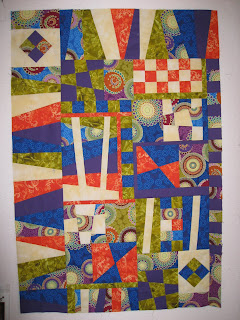 Anyway, this process is a blast and I am pleased with the top. Now "all I need to do" is figure out how to quilt it!

The fabric with the circular pattern, which was almost too hard to cut, and the blue were gifts from a friend. She said I should make something fun with it. 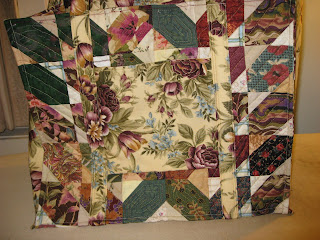 I also put the scrap sack I had partially assembled as a teaching sample together. I had fun with the quilting as well as laying out the blocks on this one.
The pocket is on the front of the bag.

All this needs is a proper home. ( I bet you wish you were on my Christmas list!) 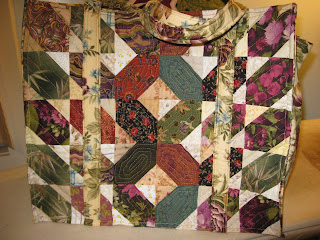 I am grateful for:
The great luxury of being able to work part time.
The friends who challenge me to try new things.
Cream of Broccoli soup.
Family dinners.
Cozy cold weather clothes.
Posted by Martha Lorshbaugh at 3:24 PM