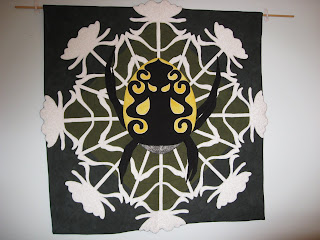 Well, SHOOT! I had planned a nice long post full of pictures, telling the evolution in my quilting life during the three years it has taken me to get this piece to a point I can call "finished". ( I may be adding some borders to it, so I'm not sure it really is finished) However, I cannot locate the pictures I took during the design phase of the project. So that will be a story for another day, I guess.
I call this piece "Princess Argiope". It was inspired by Jane Sassaman, a real spider called argiope aurentia, and a book, called "Exotic Alphabets and Ornament," by William Rowe. (One of those wonderful Dover publications!!!)
I apologize to those of you who get the willies from spiders. That is part of the story I can tell without the pictures. I was the little girl who ran from a room yelling spider and then refused to return until I knew the thing was dead. My Grampa probably tried to get me to realize they were actually "Nice", but I wasn't having it until I became a mom. I was not going to teach my boys to be afraid of "spiders and snakes" so together we read about and watched spiders and I learned to appreciate them. The spider who inspired this piece lived in one of my flower beds in the summer of 2006.
I have let this project sit for great lengths of time while I debated how to do things and learned new skills to be able to do what I wanted to with it. It has pushed me to become a better quilter and hopefully a better artist! I am happy to have something to show for my time, even if I do feel that I'd like to start all over and do it right now that I know how! 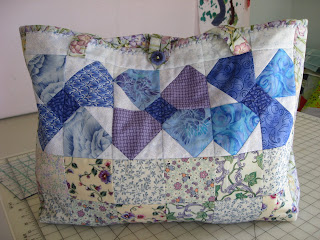 The other project I'm showing this week is called the Posey Tote, by This and That designs. I used Scrap Therapy squares to make the bag, and fabric from my stash for the handles and lining! (A fellow Guild member calls that free project!)
Scrap Therapy itself is undergoing some changes, so I have been finally doing some of the other things I had found that work with all those squares I have cut up.

We're supposed to have snow tomorrow, so I'm guessing I'll be able to sew this weekend, too!

I am grateful for:
The mockingbirds still singing in my back yard.
Layers!
Cookies fresh from the oven.
An extra hour of sleep this weekend.
A sunrise that is so fabulous you have to stop for a minute to appreciate it!
Posted by Martha Lorshbaugh at 2:23 PM