Using up some leftovers! 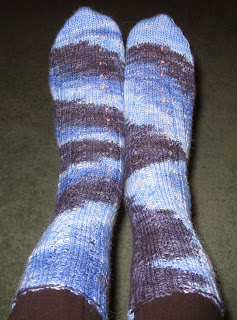 It looks like I was very very busy this week, based on the finished items.  But I cheated.

First- I finally finished these socks.  I have been knitting them most of the year- pretty much only at Guild meetings and car trips.  I really should document things better, so I would know exactly when I started them.  Isn't it funny how the pattern changes even though it's the same skein of hand dyed yarn?  (Alpaca- SO soft!) 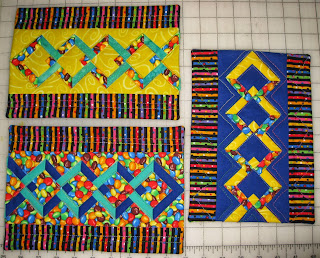 For our guild Christmas party this year we are doing a mugrug swap.  You bring one, you get one.  Simple, right?  But I think I'd rather know who it's for since I made more than one.
Here's where I cheated...
I had demo samples from when I showed the double diamond ruler a couple of years ago.  I added borders, did the pillowcase thing and quilted.  Voila!  Finished. 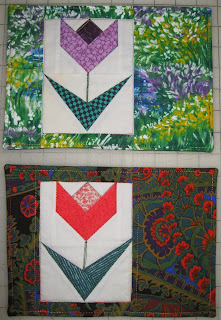 I found these tulip blocks from a paper piecing demo I did many years ago in the same "orphan project" box as the double diamond samples.  So I decided to make them into mug rugs, too.  Easy peasy!

But now I have to decide which one to bring to the meeting.  (maybe all of them and I'll just give the extras away)
Any requests? 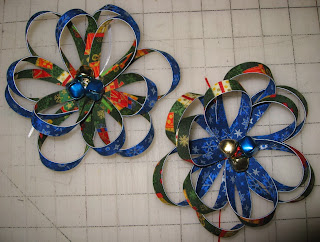 A co-worker admired the Penny Marble snowflake ornaments I have hanging over my desk.  I was thinking I could make some more to give to co-workers instead of cookies.  When I went looking for the pattern, I found the kit for Penny's Winter Blossoms.  So I made those up- easy and fun, even though I hate "heat 'n bond".  I ended up not being able to do the snowflakes because I only had tiny pieces of wonder under in my stash.  I know I have more- somewhere! 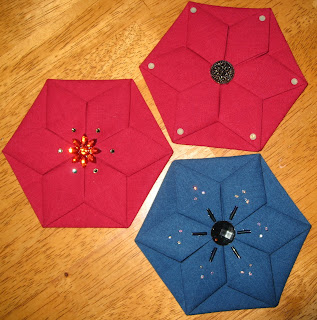 As long as I was in the Christmas project mood, I went back to the "hexagami" I tried a few months ago.  It was suggested they would make nice Christmas ornaments, so I made a few.  I like how the red ones looks like Poinsettias!


Even though they were simple projects, it felt good to have so much to show for my sewing time this week!


Winter is upon us.  Last week there was ice on my back steps and I almost fell.  I went right in to get the ice melter.  I do not use rock salt, and neither should you.  There are alternatives.  Most of them are not only safer for the environment, but for our furry friends as well!

I am grateful for:
All of my foster cats/ kittens have found their furever homes!!!
A short Christmas shopping list. (Have I mentioned I really hate shopping?)
Discovering it was the wildberry flavor prilosec causing a return of my GERD symptoms. (why a tablet you have to swallow whole needs a flavored coating is beyond me)
I can still get locally grown McIntosh apples.
Non-traditional holiday music

Posted by Martha Lorshbaugh at 3:22 PM