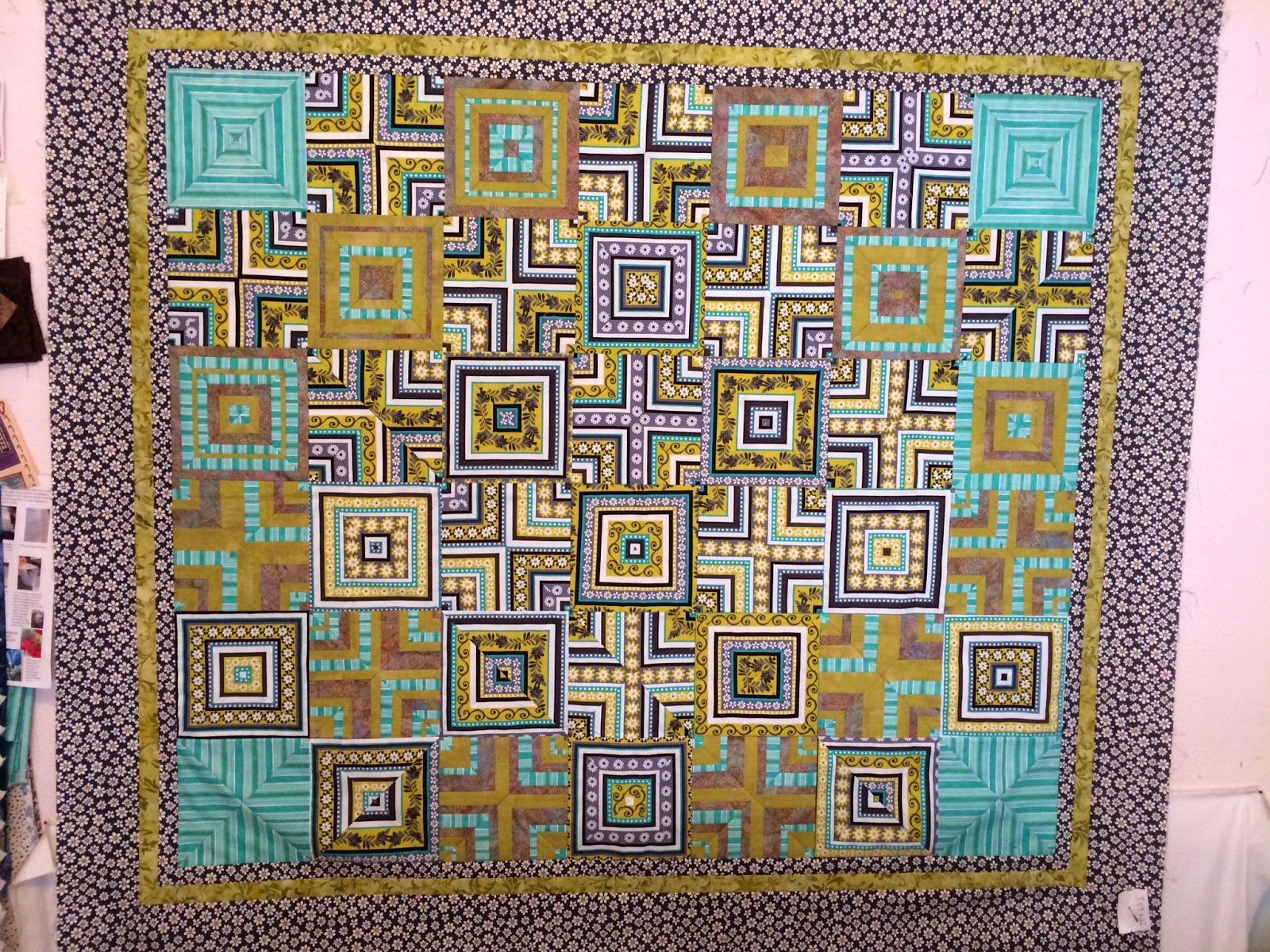 I finished piecing this quilt last year- or was it the year before?  It was from the class with Anita Grossman Soloman the Museum Quilt Guild hosted in 2011.  I got stuck on this the first time because I had a small piece of the stripe I used, and wanted a bigger quilt.  I finally solved that issue by making my own striped fabric with strip sets I pieced!


But then I fizzled out at the point where many quilts hit a roadblock- How do I quilt this?
So I put it on the pile of unfinished tops to let it percolate for a while.  Every so often, I would take it out and look at it but never had the "aha!" moment!
When the guild had a meeting focusing on getting unstuck so we can finish projects (hopefully in time for the October quilt show), I brought this in.  It was a fun meeting- seeing others having the same issues I do and helping each other resolve those issues.
Suggestions were dropped into a shoebox if we weren't standing there to discuss them.   (because we had great ideas for everyone's project but our own!)
Using my "draw free" app, I have auditioned some of the ideas I got. 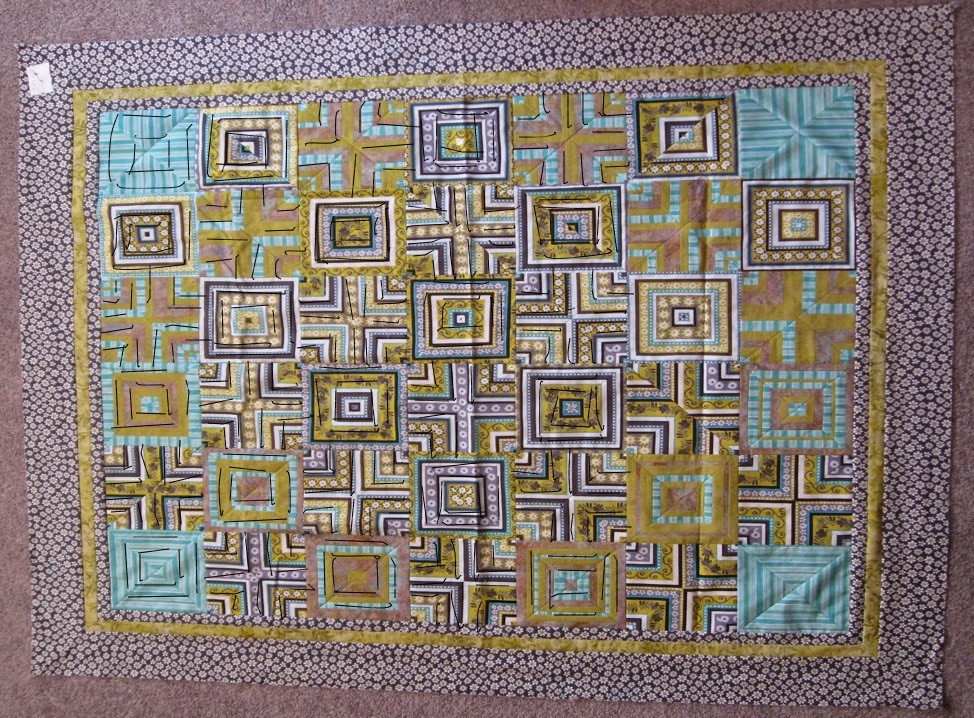 The first suggestion made me say, "yes- that's it!"
Since it has the strong geometric already- and doesn't need anything else to make it interesting- just enhance that with the quilting.  The lines are hard to see, but that would be the point of this type of quilting.  Using the black lines in the original fabric is perfect, but where would I quilt in the other blocks?

(I just noticed I drew squares in an X block)

There were several suggestions following the though that you should add curves to a quilt with strong lines.  Using one of my favorite zentangle patterns (called a tangle), I thought maybe just a few curves in each block?  (Not fan quilting)  The direction of the curve alternates, so it would make a nice texture. 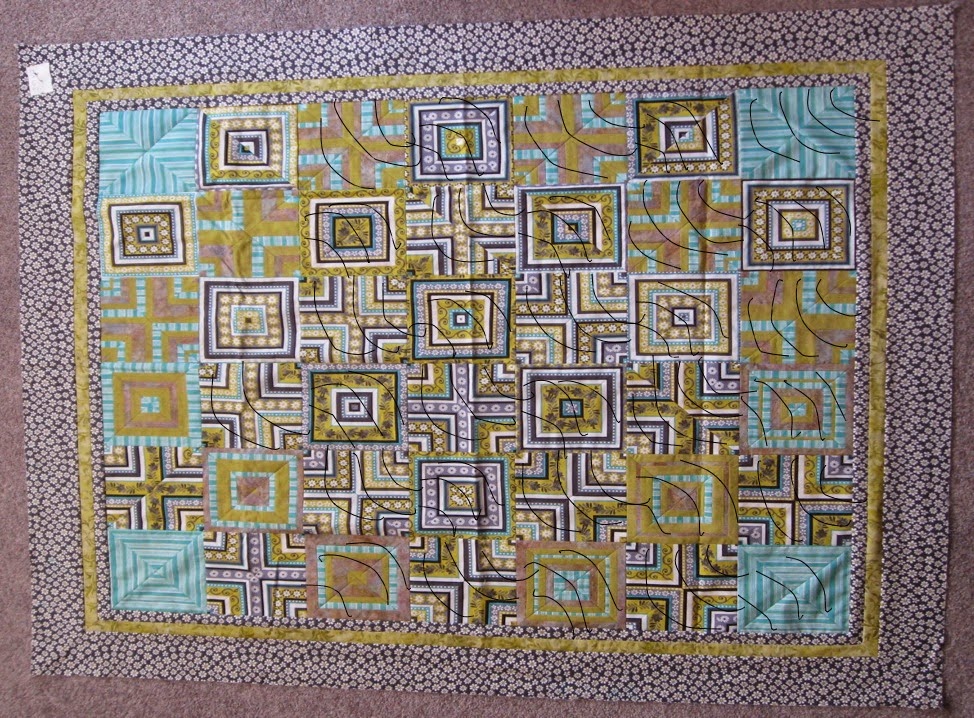 But the suggestion that really made me say "hmmmmmm!"  was the suggestion of all over wavy lines like Jane Sassaman does on many of her pieces.  In this one, she uses a feather stitch, or maybe it was two lines of the blind hem stitch.
So I started playing with wavy lines. 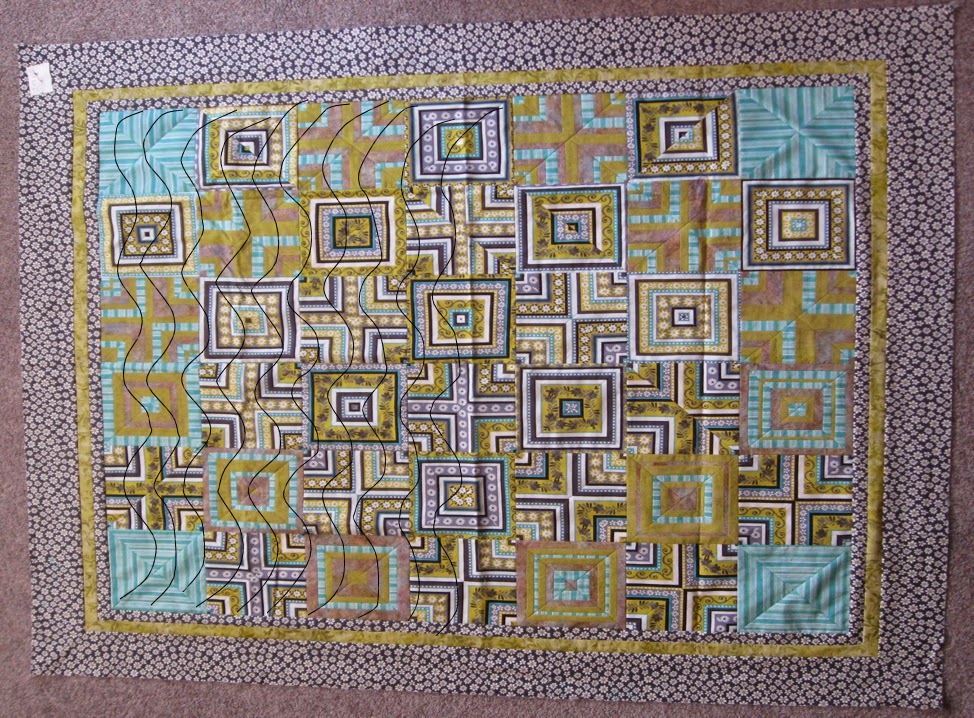 Which direction would they look best?
Obviously they would be closer together on the quilt- and I hope I could echo my lines better on the machine! 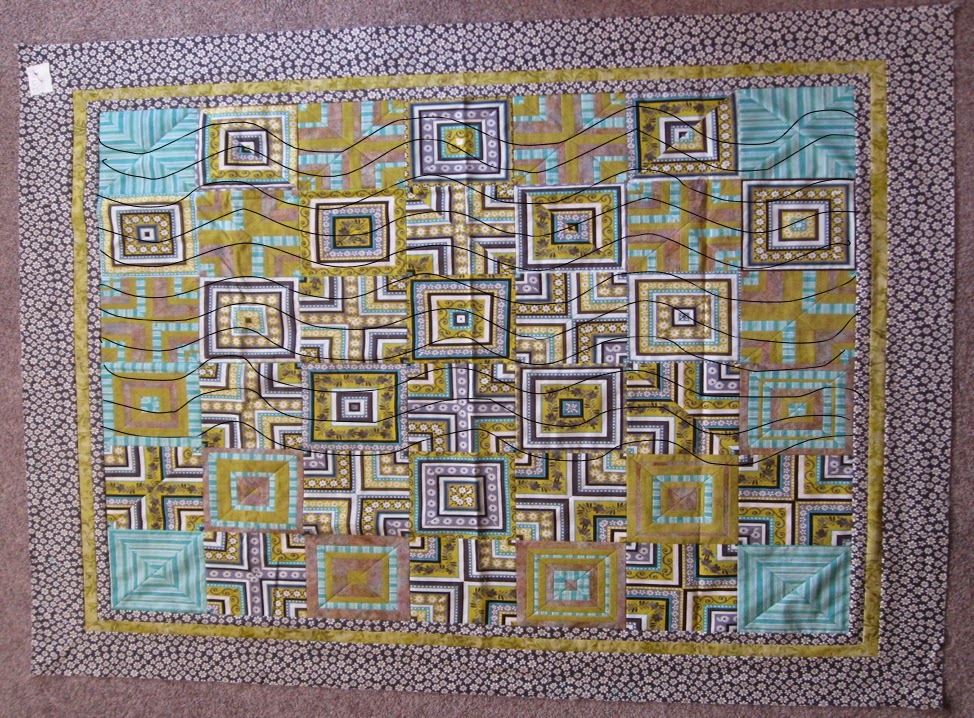 Or maybe follow the "frame" made by the strip set blocks?  If I do this what do I do in the corners?  It doesn't divide evenly into quarters. 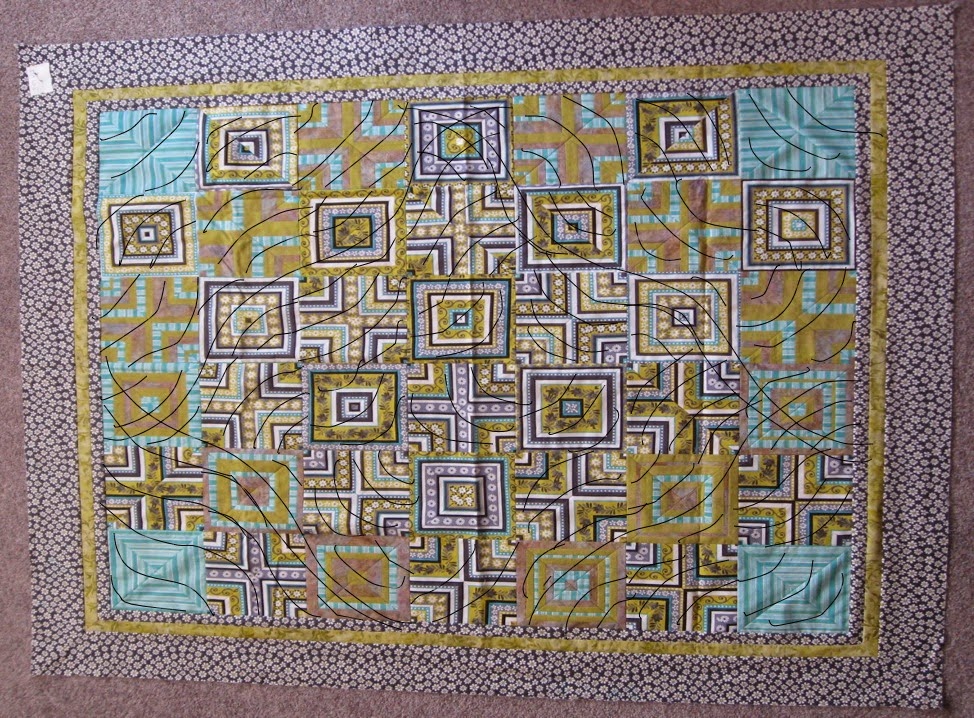 So now I've gone from not having ideas at all to having too many options- and I want to try them all.  Drawing lines on a printout, or doing it digitally as I have done, is a great way to audition ideas.  But you can never really tell how it will look until you start quilting.  And with machine quilting, that is the point of no return.
My first impulse is to keep it simple- as Anita taught us!
Of course, I haven't even thought about the quilting in the borders......


My green thought is having noticed how often religious literature- small pamphlets, trading card sized things, etc- is left in public restrooms to be tossed in the garbage.  Apparently those who want to save my soul have no concern at all for saving the planet.  Just a bit of irony, in my opinion.

I am grateful for:
Angela finally started purring when I pet her the other day!
Watching a hummingbird feed just a few feet from me as I worked in the garden.  (it almost makes up for the hours and hours of weeding I have to do.  almost)
Perry's now makes a dark chocolate ice cream.
Finding a fabulous vintage skirt at Goodwill yesterday.
I finally made it to the sewing room for a few minutes yesterday.
Posted by Martha Lorshbaugh at 11:33 AM