How long does it take? 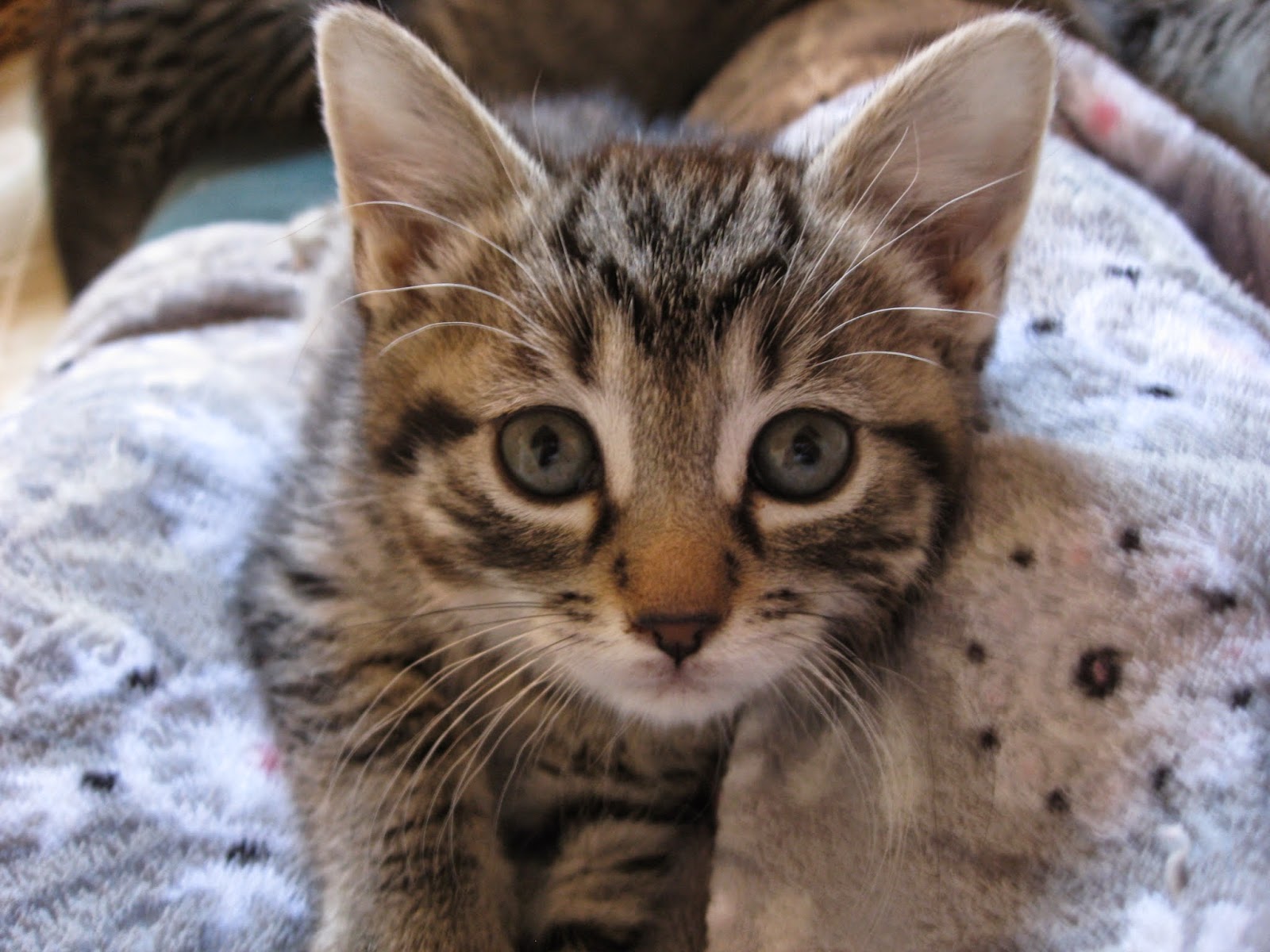 I have had a hard time the last couple of weeks finding something to write about.
I thought of doing a post about
Billy- my poor little foster kitten who almost died.  But sick kitten pictures aren't very appealing.  And the story isn't exciting.  Every time I went into the nursery for nealry two days I expected him to have expired.  But he didn't.  I take no credit.  I got advice from one of the other foster moms and medicine from the vet- who really didn't expect him to live.  But he did. 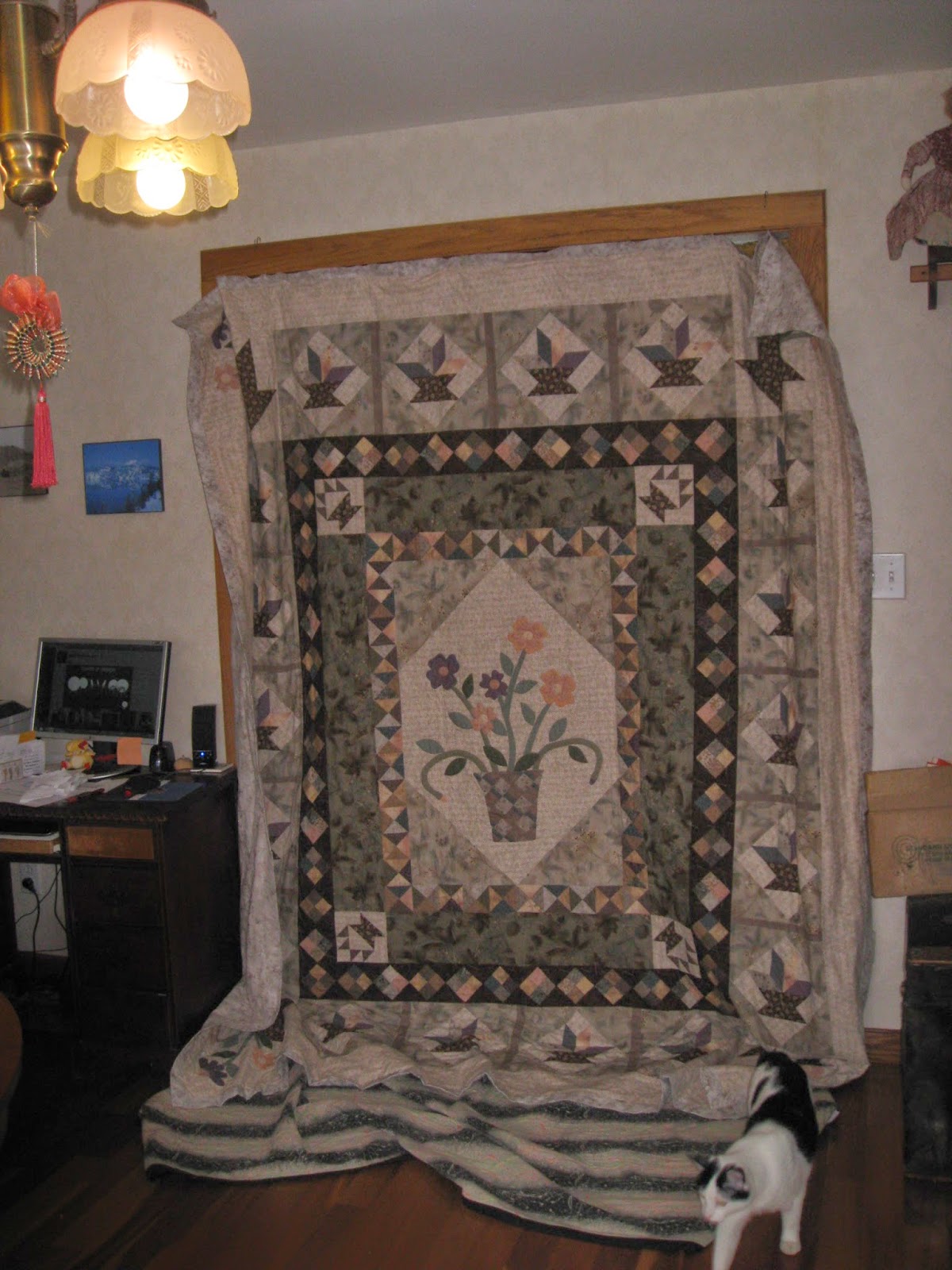 Otherwise, until a few days ago I was spending most of my creative time on the raffle quilt.  I mentioned to my husband that I wish I was one of those people who keeps track of the time I spend on a project, because I bet I have a couple hundred hours into the raffle quilt.  ( I really have to get a decent picture of it one of these days)
Quilters are often asked how long does it take to make a quilt??
Well, that depends on the quilt.  This one has been a very long journey for me.  And in the end, I will have nothing at all to show for the time. 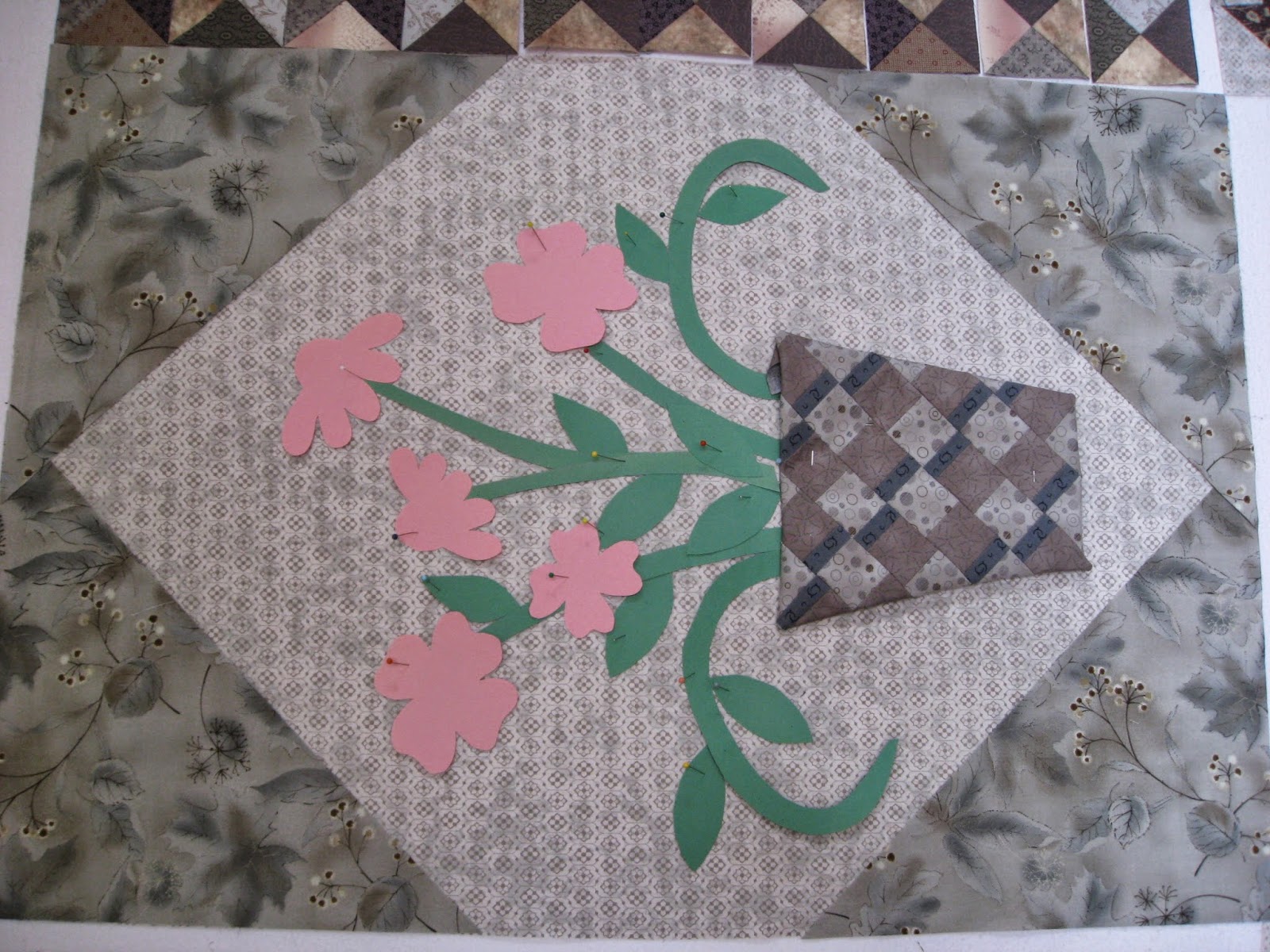 There was the hardest part- the shopping.  (Thanks again to Emmy for helping me choose the wonderful fabrics!!!) 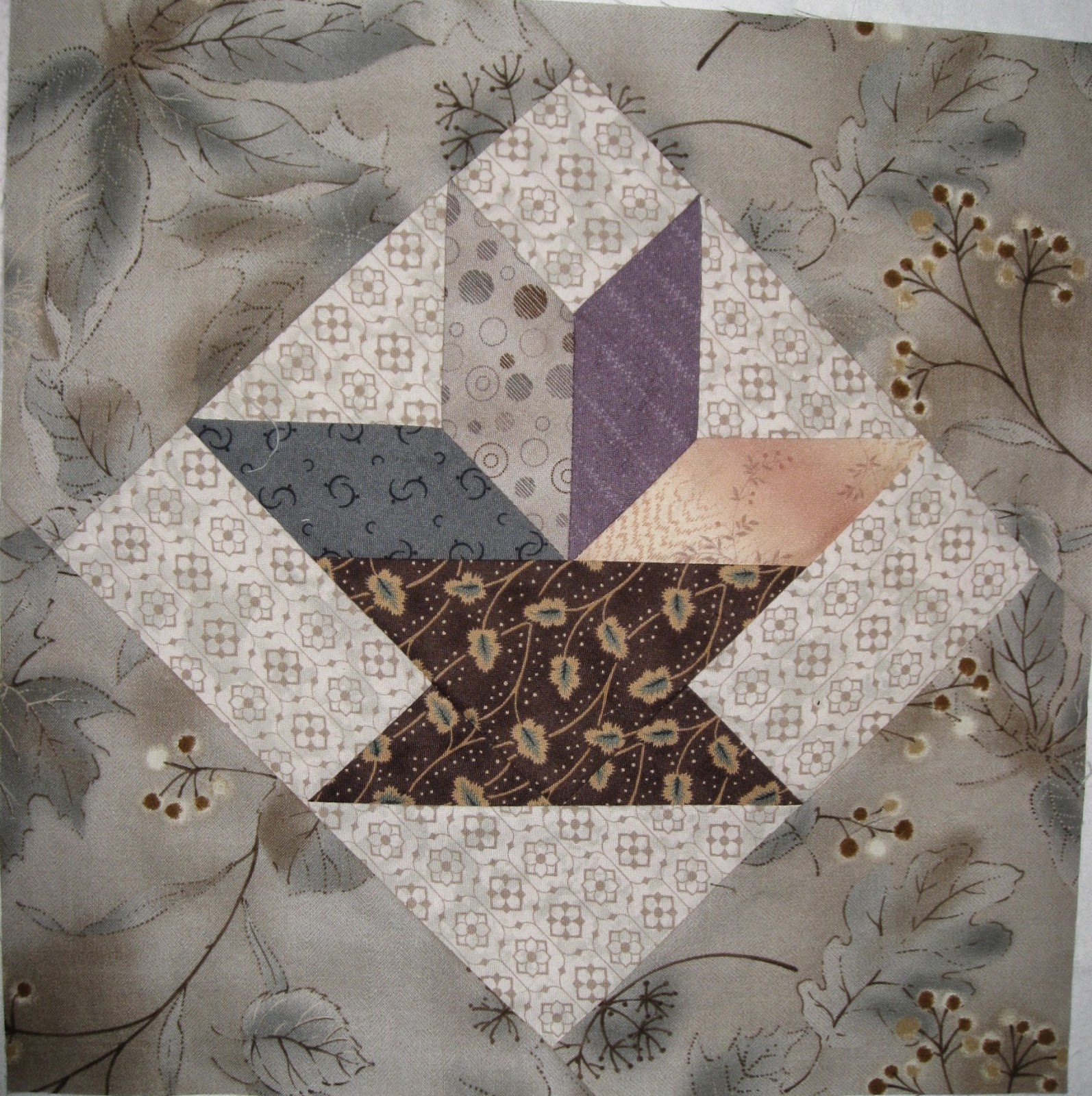 Then there was the making of sample blocks and writing out directions for all skill levels to be able to follow since this is a group project.
I had to make the center applique before I could even decide which fabrics would look best in the borders around it.  So there were the hours in doing hand applique. 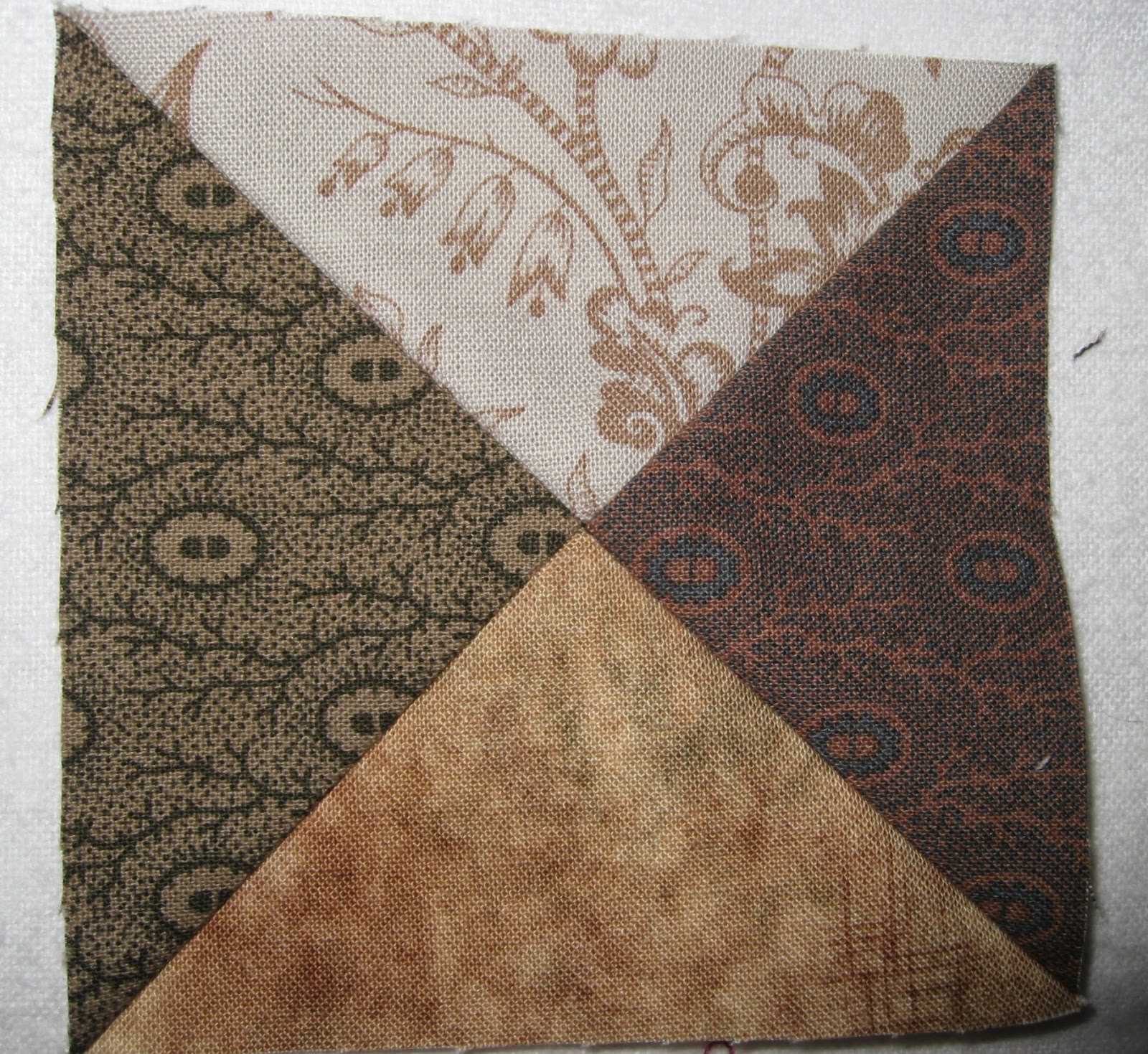 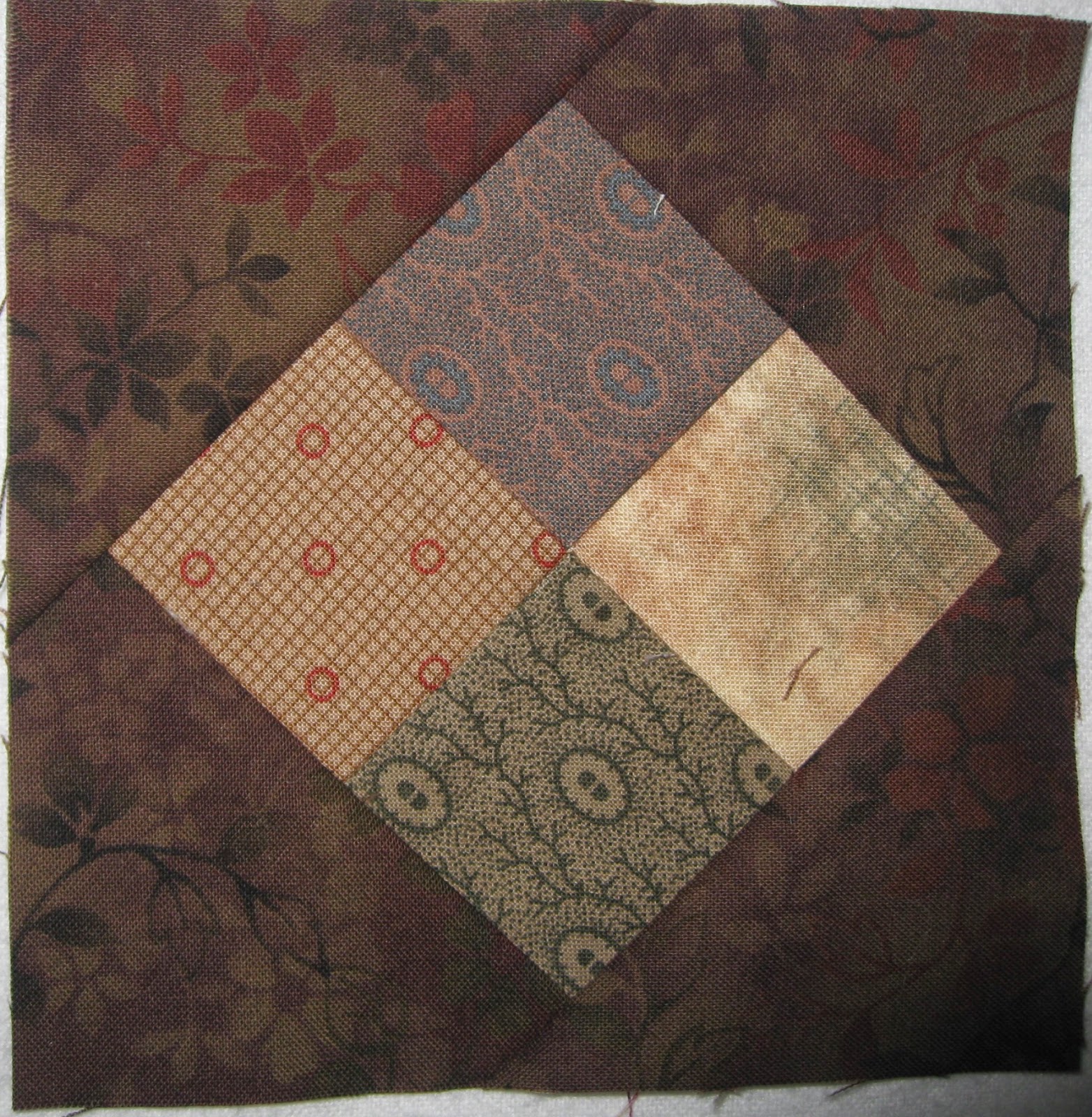 Then came cutting and packaging of kits. (thanks to Mary Ellen for coming way out to the boonies to help with that one!) And more shopping when I changed my mind on one of the fabrics and needed more.


I distributed the blocks at guild meetings, recording who had which blocks.  There was the receiving of completed blocks, most of which I had drafted over-sized so I could trim them to size once they were returned to me.  So I spent hours squaring up blocks (my least favorite part of quilt making!) 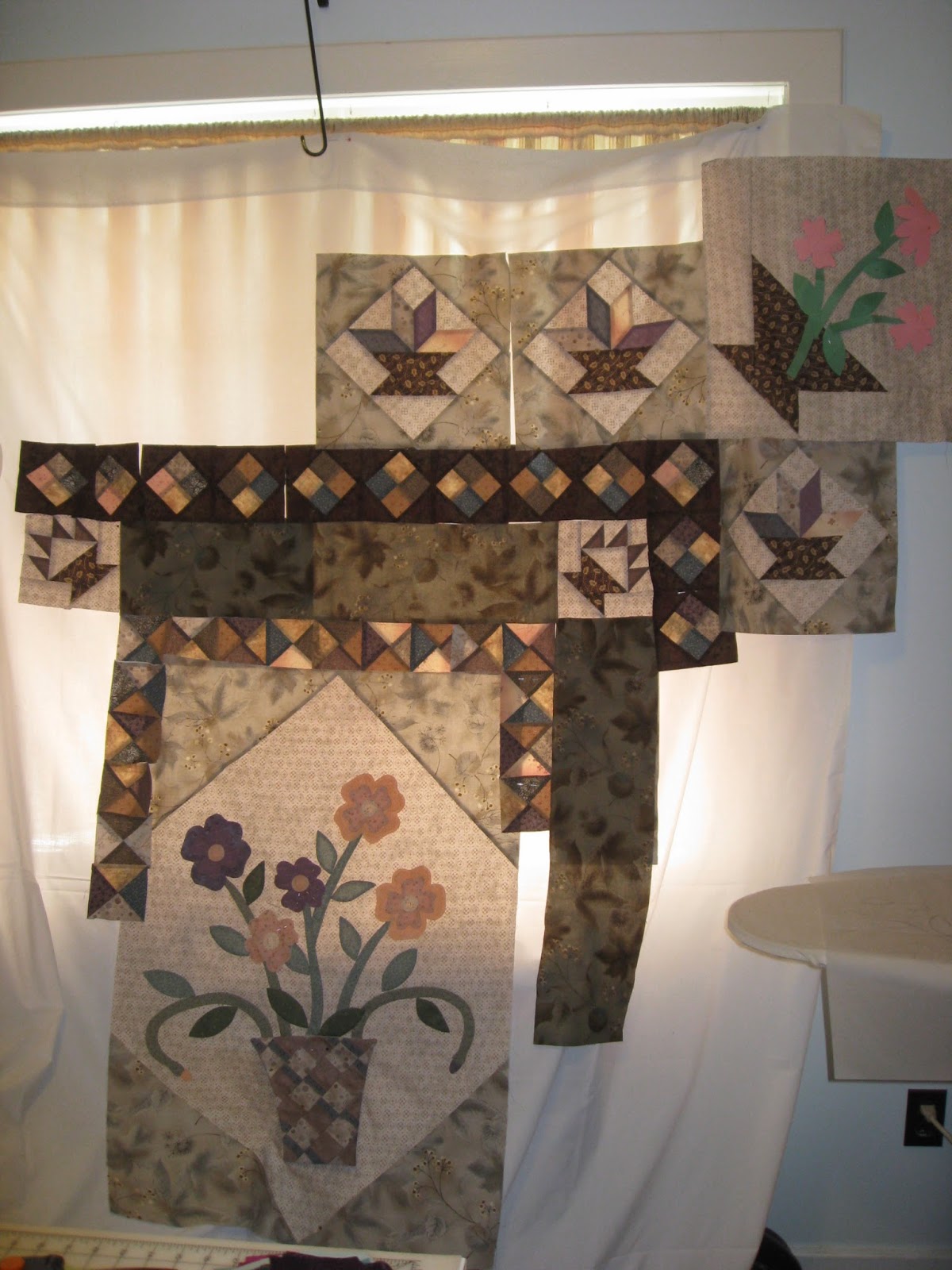 THEN came the say when laying out the blocks for assembly that I discovered my rookie mistake- adding the width of the border only once instead of twice!  That required me to make more blocks.  Many more. 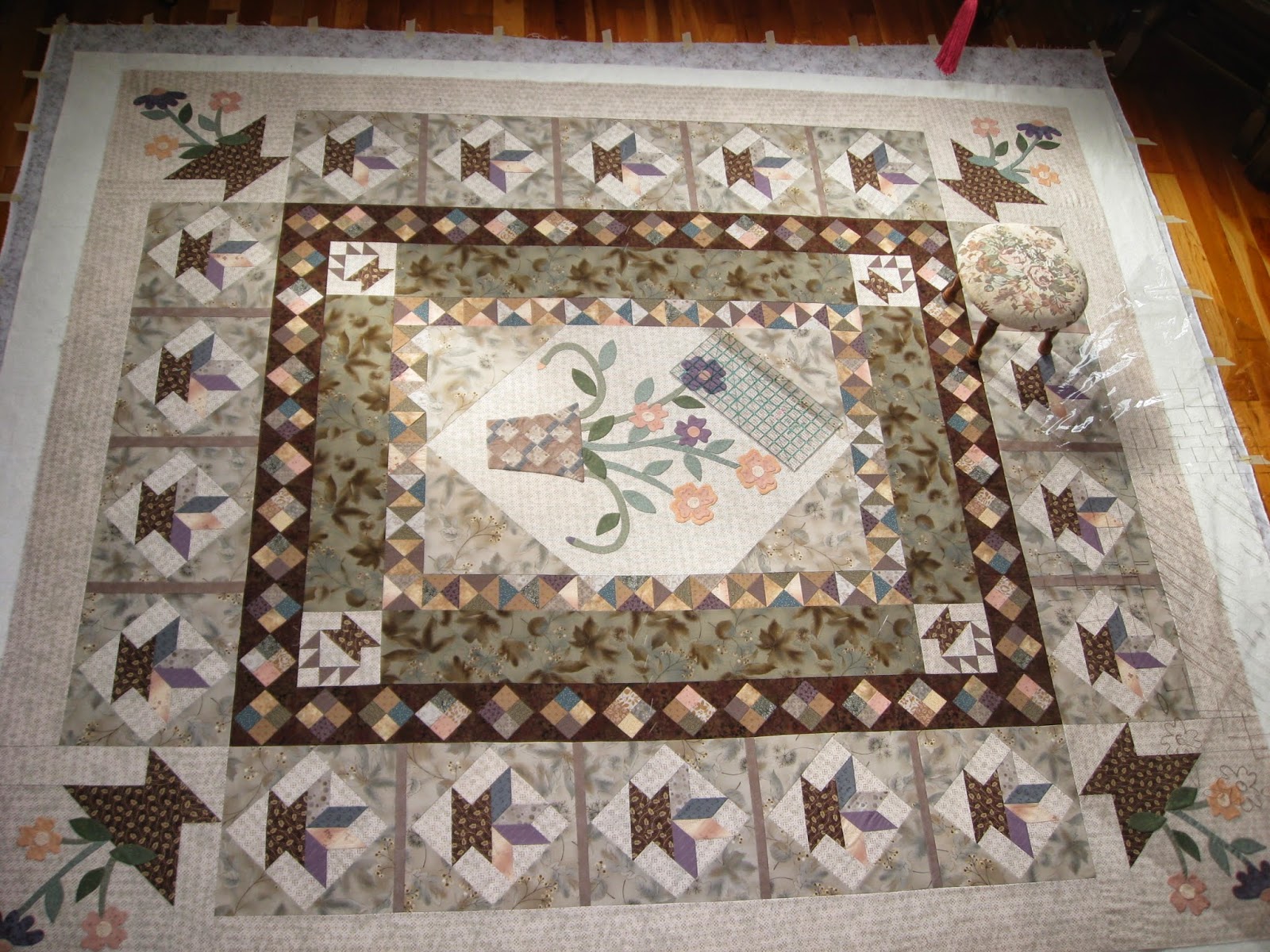 Once I finally had it assembled, I layered and basted it myself since finding space and a time for others to help was harder than spending three days on my dining room floor.
While it was down there, I marked out to the third border for hand quilting.  And I started hand quilting it until the next meeting when it would be passed off to the first name on the list to help. 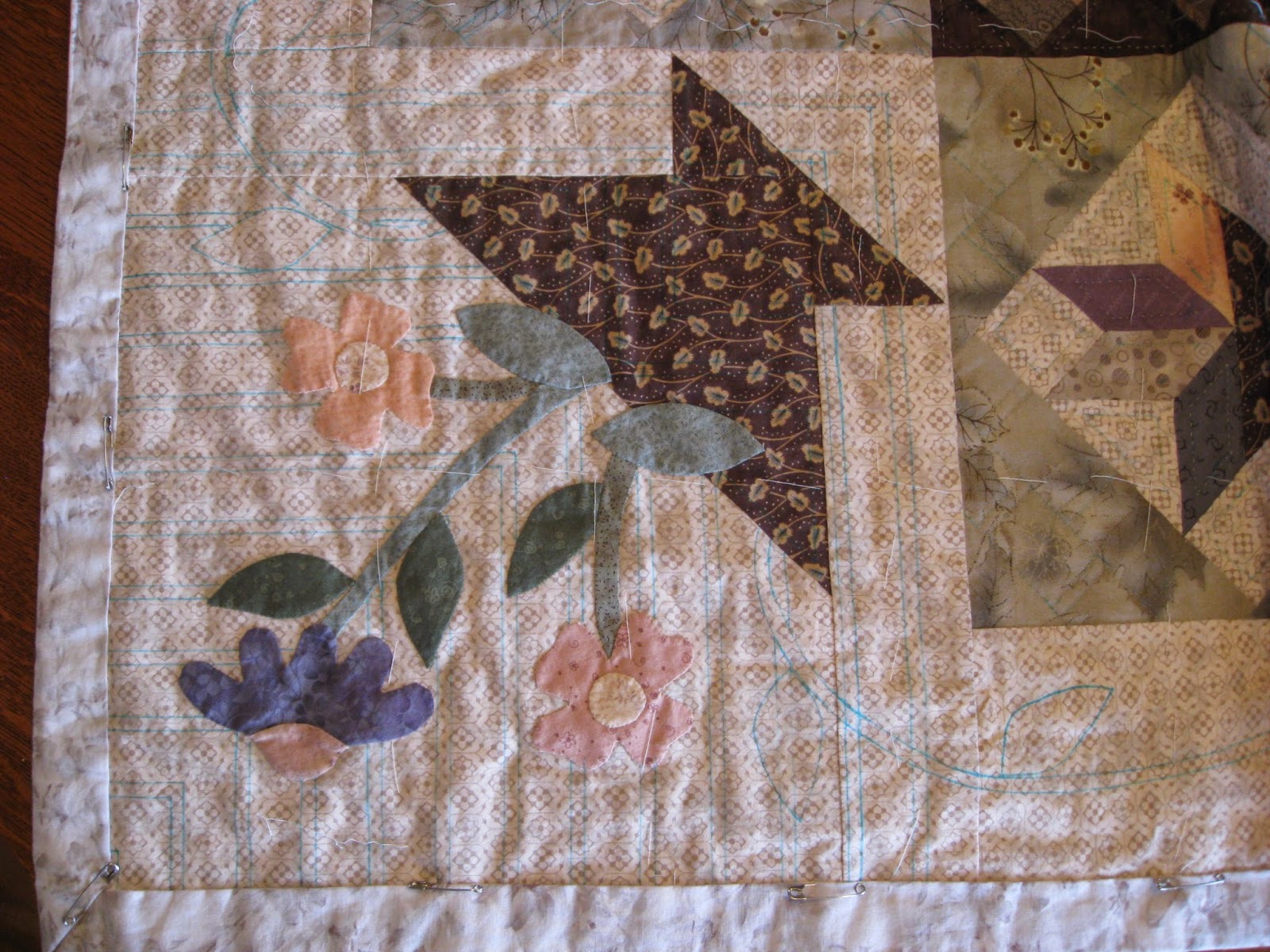 But the marks faded, so I had to re-mark the third border.  There is no pattern, I made it up.  So no one else could do it.

I had it most recently to finish marking the last border and corner baskets.


I am not telling this so anyone will know how hard I worked on this quilt.  I'm not looking for sympathy, recognition, awards, or adulation.  But once I started thinking about it, I decided maybe I am glad I didn't keep track of my time! 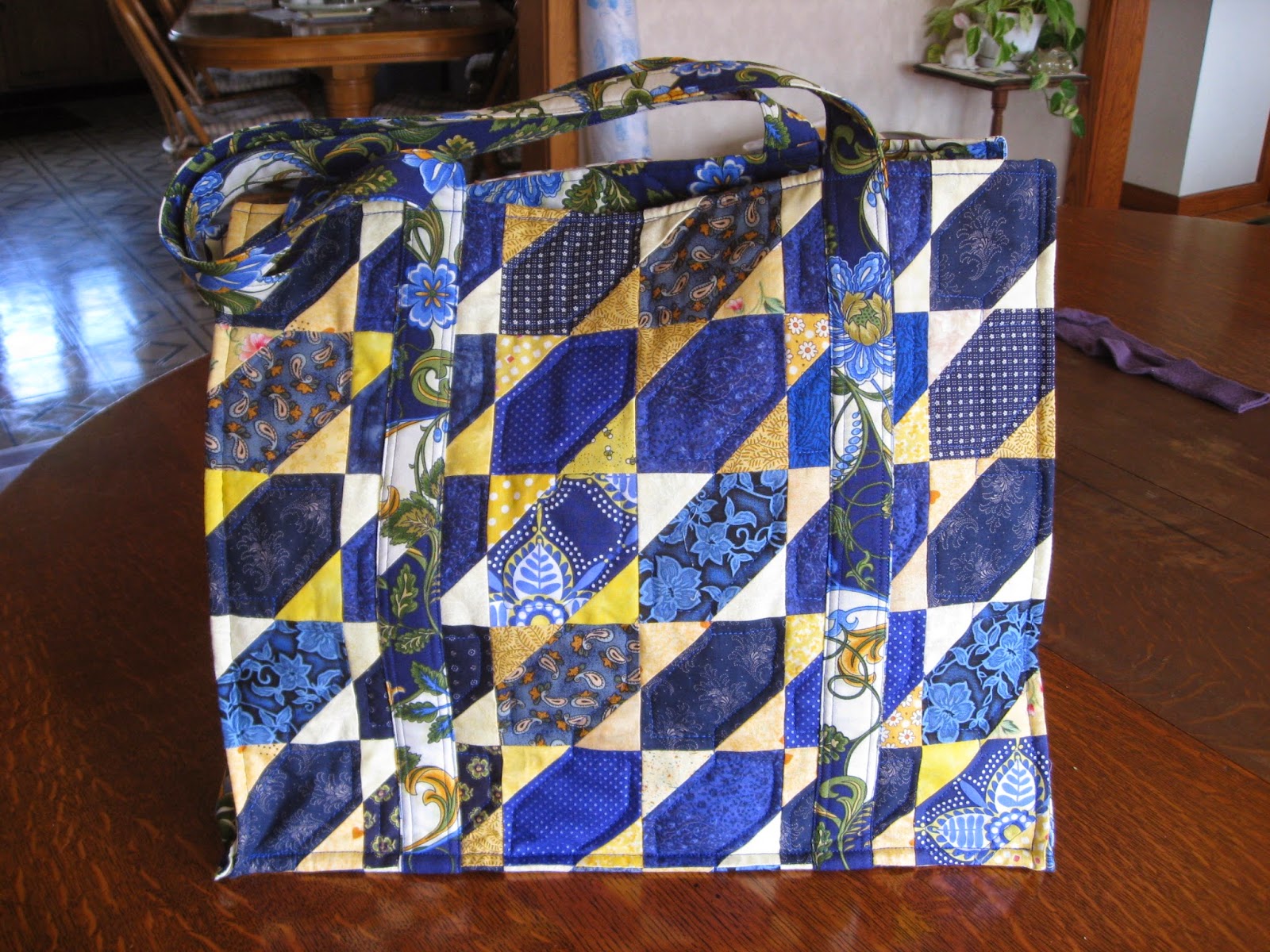 The project I worked on last weekend is for a swap with my online friends.  (it is in transit so I hope she gets it before she reads my blog- if she reads my blog!)  It was MUCH quicker, although it did help that I had done most of the small piecing as samples for the class I taught.  (I cleaned out my sample box recently!)

I have made this bag several times, from a Scrap Therapy pattern. 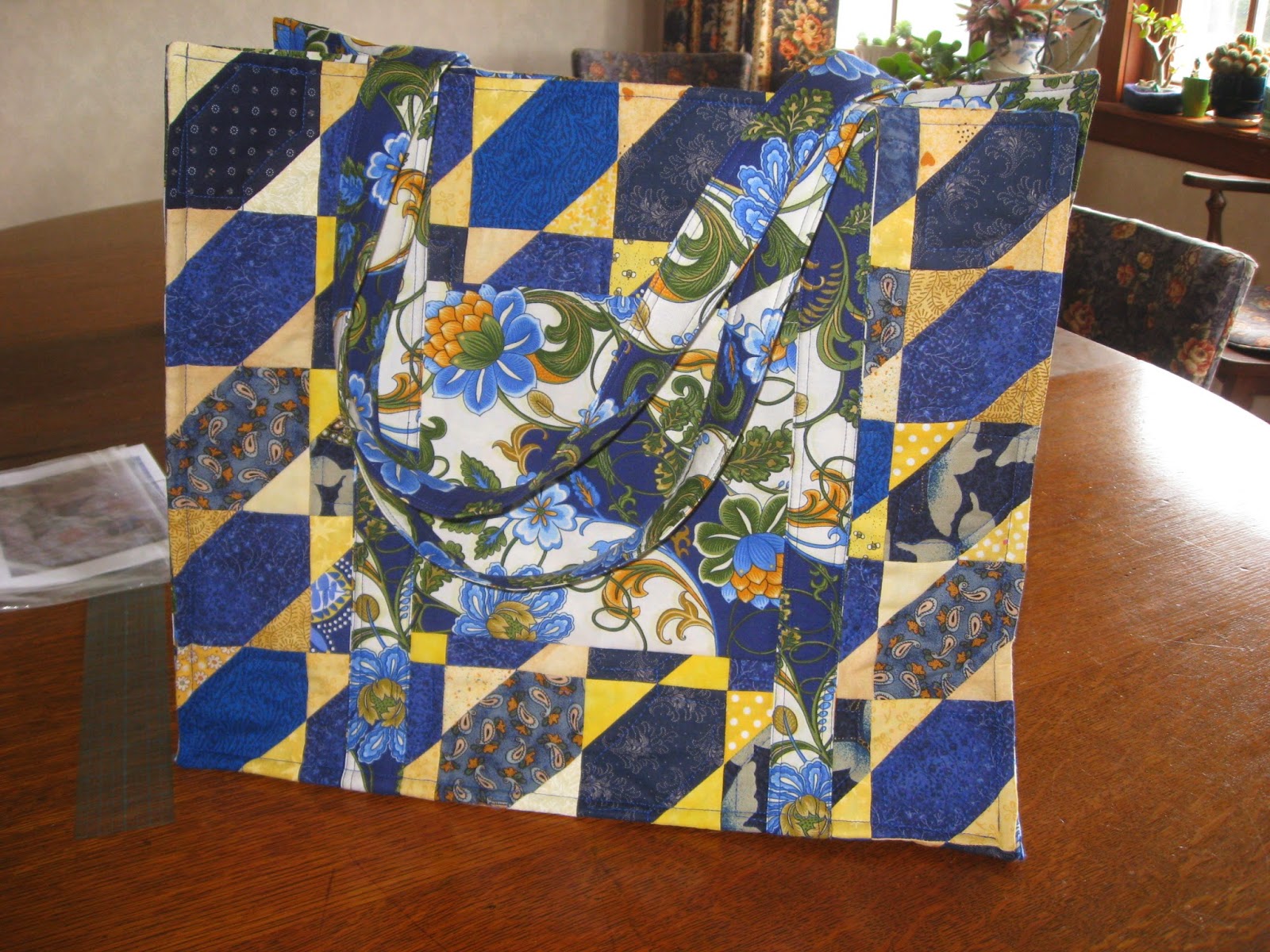 It's a great project bag, but I always give the warning that if you fill it to capacity you may not be able to lift it!


Hopefully now that we are getting some nice weather, I can show pictures of flowers soon.  I was out in the garden yesterday, but the only thing blooming is those yellow flowers- you know, the sort of fuzzy ones that grow low to the ground everywhere?  I guess they have been around for thousands of years.  We used to look forward to eating the greens in the spring, but I haven't had them in years.

I am grateful for:
Being able to walk outside, eat dinner on my screen porch and have windows open all night in the bedroom.
The people who helped me through the kitten crisis.
My best friend who never tells me to stop whining.
I am nearly finished with the raffle quilt. (well, at least the end is in sight)
Chocolate- every day!

Posted by Martha Lorshbaugh at 3:35 PM