I have been absent for a while, as I'm sure you've noticed.  The explanation would sound more like excuses- I've been busy, and sick, and had sick kittens, and haven't been sewing very much, and I spent a few days outside trying to do a last bit of gardening before the snow comes to stay....  Stuff like that. 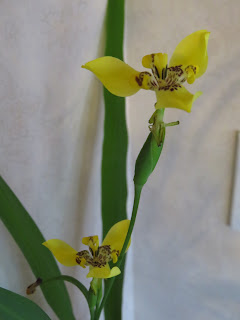 I still don't have much to write about, but want to try and get back into the habit of posting.  So here's a quickie.

Last September, Mary Lee and I went to the RAFA exhibit at a small gallery in Brockport.  In the corner of the gallery was a very cool plant, which I admired, and was given a cutting by the nice lady at the gallery.  I later learned the plant is called a "Walking Iris", and is grown in gardens in more temperate parts of the world.  But it does well as a houseplant as well.

So I brought my babies home and put them in water to grow roots.  Over the summer, they had a nice partly sunny spot on the screen porch.  Then a few weeks ago I noticed it had a blossom stalk coming up! 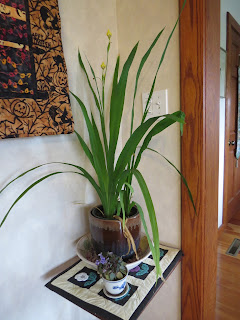 It has been blossoming, one or two at a time, for a couple of weeks now.

From what I've read, after the blossoms are all gone, it will grow small plantlets, like spider plant babies, on the blossoms stalk.  Soon I'll have babies to share too.

I read an interesting article a couple of weeks ago about "dying green."  I have always believed the body is an empty shell, and what becomes of it is not important.  So spending a lot of money and exposing people to toxic chemicals, wasting valuable land resources for burial... just doesn't make sense to me.  Everyone in my family has been cremated, so I accepted that as the way it's done.  However, I'm thinking I may opt for the greenest option.  I kind of like the thought that someday the chemical components of my body can nourish a tree somewhere, or maybe some exotic flowers.

I am grateful for:
Being able to sleep without coughing last night.
A nice meeting with the ArtCGirlz.
The ability to start again after a "fail"- if I am willing to try.
This adorable video of Jonathan in his jumper thing for the first time.
I finally figured out where all my data was going! ( I think)

Posted by Martha Lorshbaugh at 10:33 AM