My Visit to Portland

I went to Portland for a few days to visit Guy. It was long overdue, as it had been 4 years since we had last gone out to see him.  (It has not been that long since we've seen him- he has come here!)
Anyway, he had to work for part of the days I was there, so I explored on my own.  Thank goodness for the Google maps app on my phone!  I didn't carry my "real" camera with me so some of these pictures are grainy (note to self- time to upgrade the phone)

I always sit by the window, in part due to mild claustrophobia.  But I also love looking at the scenery!  (even if at times it's just the other side of the clouds) 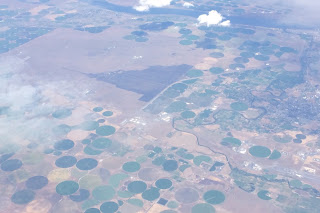 I wish all airlines provided a way to track where you are, especially for views like this one!  What the heck do you suppose the dark area is (the area that looks like the top of a skyscraper to me)?  A landing strip for aliens?  A giant shopping mall??


There is always something interesting in Portland. 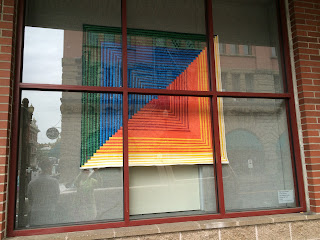 These are made from tarps by a local artist named Wynde Dyer.

I had never seen one of these statue guys in person before.

My Hotel was right on the waterfront, and only a few blocks from downtown.  Good and bad, since it was loud at times, but I did enjoy the view. 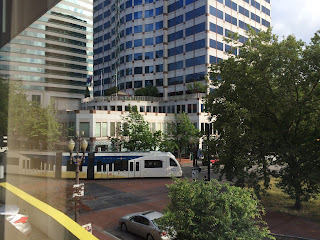 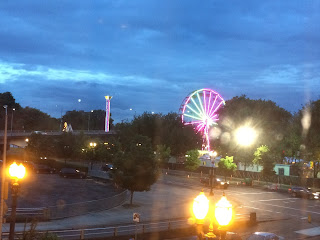 It was Rose Festival time, so the city fair was on the waterfront.  I enjoyed watching the light show on the ferris wheel.

I visited the Portland Art Museum one afternoon.  I guess even when it comes to art, I'm attracted to the brighter colors.  (shocking)  They have a nice collection of modern art.

They had an exhibit of "Native Fashion", which was very cool.  My favorite piece was these boots, by Jamie Okuma, which are completely beaded!


I went to the Saturday Market, which is an amazing arts and crafts bazaar.  (yes, I came home with a few interesting things!) 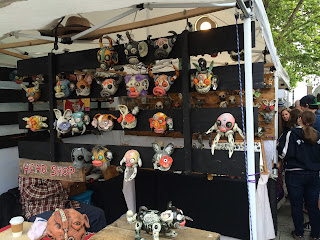 There are also a lot of food vendors.  I could not pass up frozen chocolate dipped cheesecake on a stick!  ( I paid for eating it the rest of the day, but it was worth it!) 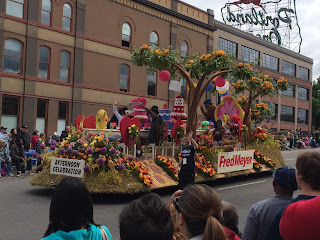 I even got to see bits of the Rose Festival Parade. 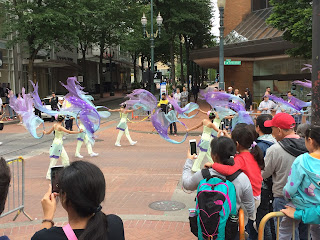 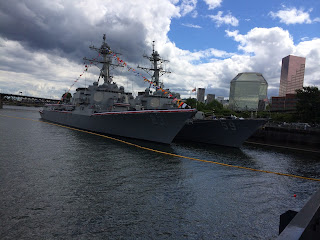 Part of the festival is "Fleet Week", where Naval and Coast Guard ships come up the Willamette River. It was a pretty awesome sight.
There were sailors in dress whites all over the city.  My favorite encounter was passing a group of them going into a liquor store.  What else do you do when you get shore leave.  :-) 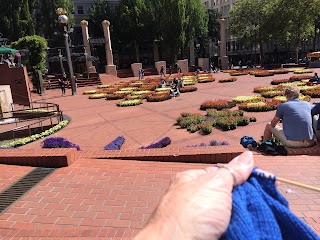 Pioneer Square Park is a pretty great place in the center of the city.  There was a neat floral display set up.  I went down one morning to knit for a bit and watch people. 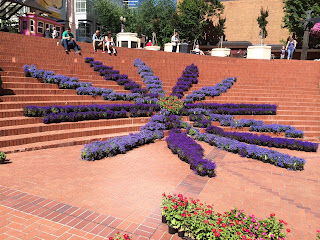 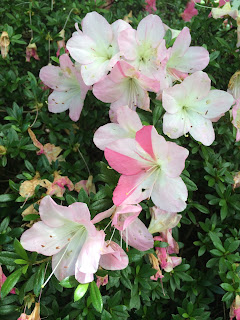 We visited the Rhododendron Garden.  The flowers were pretty much all gone, but it is a beautiful park, nonetheless. 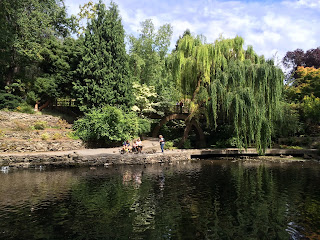 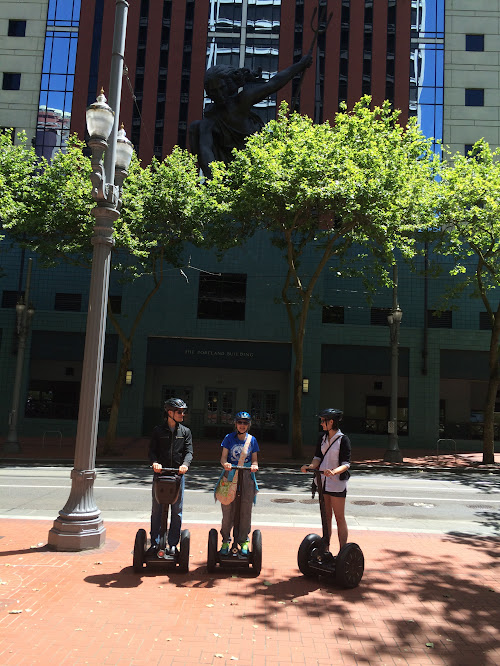 We took a Segway tour of downtown.  I have always wanted to ride one of them- and they are a BLAST!!!

Here we are in front of the Portland Building.  The statue is called Portlandia.  (now you know where they got the name of the show) 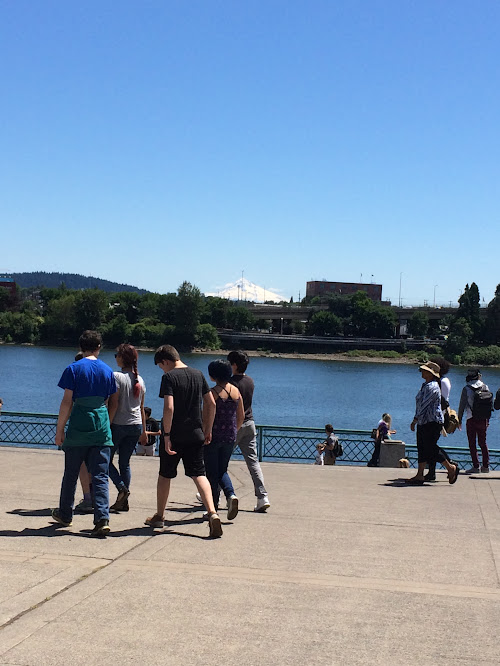 While on the tour, we got a nice glimpse of Mount Hood..... 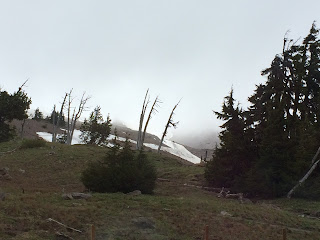 ....which was a good thing, because here is what we saw when we drove up to Mt Hood the next day.  The clouds are where you should be able to see the top of it. 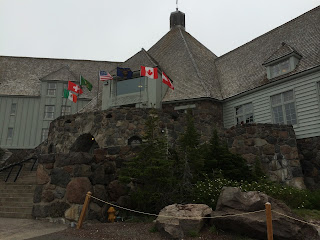 But we had a nice time touring the Timberline Lodge.  Does it look familiar?  They used the exterior of the building in the movie "The Shining." 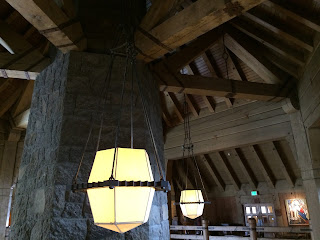 It's pretty amazing inside- it was completely handcrafted!- and we had a nice lunch there.

One thing I was impressed- but not surprised- by in Portland, was the number of solar panels to be seen around the city. On approach to land at the airport, I noticed many buildings had almost full roof top installations.  While on the segway tour, we learned about the Edith Green Wendell Wyatt Federal Building.  Among the elements that won this building an award, naming it one of the top ten examples of sustainable architecture in America is the huge cistern that collects all the rainwater to be used for flushing of toilets and use in landscaping.  One thing I didn't see in either of these articles, is that the parking garage is on 5 stories below the ground!  There is a park on top of it, and you'd never know!  This is what is possible when we commit to reducing the damage man is causing to this planet!  We MUST demand more of this, not less!
Meanwhile, in some ares of New York, there are people trying to slow the movement to sustainable energy, as mandated by Governor Cuomo last year.  I'm sure it all has to do with certain persons or entities wanting to make sure they get their slice of the pie.  It makes me ill how few people care to look past petty issues and embrace the larger issues involved- namely the fact that you can neither breathe nor drink money!

It was a great visit!  And now it's back to my real life.  Much less interesting.

I am grateful for:
Guy and Anna giving me so much of their time!
Realizing I actually like to fly, even though it means sitting in one place for ours! (kind of like being at work!)
My three-day weekends
Air conditioned bedroom
Getting back into my comfortable rut.


Posted by Martha Lorshbaugh at 11:59 AM