Quilting in the rain!

OK, I wasn't really out IN the rain quilting.  But over the weekend when it was rainy I had some time to spend in the sewing room.  I actually finished something!! 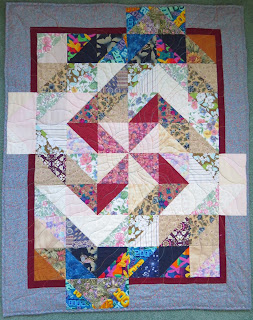 It's not the most beautiful thing I've ever made, but I'm hoping it will bring some child in treatment a bit of comfort when it is donated to a Ronald McDonald House later this year.  I used leftovers from this quilt, which I pieced in February, and a design I saw here.
(I like her version much better) 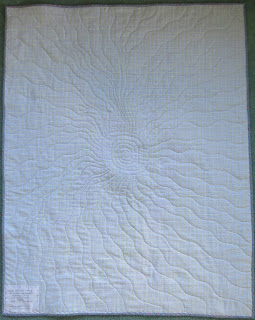 To keep the whirligig effect, I used a quilting design I found in Angela Walters' book.  I think she calls it sunburst or sunrays. 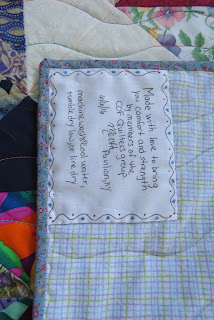 OOPS, I didn't realize this was turned wrong. Stupid technology. I wanted to show the stitching on the back.  I used the back to front machine binding technique.  (Click "show all steps)
My favorite stitches to use on the front are a feather and this wavy line.  True, this one leaves small places where the folded edge isn't sewn down.  But I still think the outer edge will be the first thing to wear out.

When I say we have to stand up and make ourselves heard regarding protecting our planet, I mean guys like these!!!

Two of the men holding the sign are actors from Star Trek!
It's always nice to get someone to help who can get their picture in the paper.  :-)

I am grateful for:
A weekend with the kids!
Sewing time.
Cool nights so I can sleep under my quilt!
Only two more sleeps!
The heatwave in Portland happened before I got there.

Posted by Martha Lorshbaugh at 12:53 PM