My schedule is about to undergo a major reconstruction due to a job change.  Still part-time and still at the college, but in a different- busier- department with hopefully a kinder boss.

So- not that I have set any records for maintaining my blog, but it will probably take a while to get used to the new "normal".  Today's post is an example.  I haven't done a lot of work in the sewing room lately, so it's a short one.  I shared last time the upcoming artcgirlz project, and my little series.  We ended up canceling the meeting because- well, summer.  But I did get them minimally quilted, and gathered a box of supplies to take along and share with the girls (girlz?) when we discussed embellishments.
Here is the current status of the project, with some of the embellishments I may use. 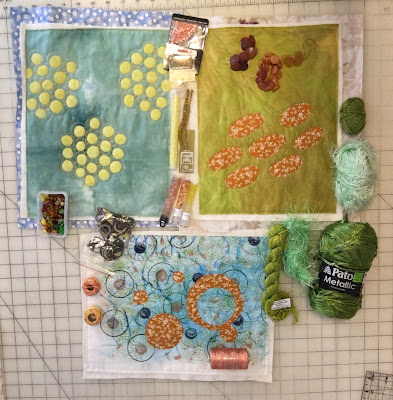 The ones in the top of the picture are layered with a backing; the other one is just batting.  I'm also testing which way works better when you embellish.  I contacted Kathryn Schmidt to ask her about this, and her answer was "It depends".  She suggested figuring out where you're going first.  I have no idea where I'm going.  But I'll get there.

I got several emails last week asking me to call my senator about the healthcare bill.  I know my senators' positions are against, but called anyway and thanked them for their hard work and encouraging them to continue to work for us.  A pat on the back never hurts.

I am grateful for:
It didn't rain in last night.
How happy Jonathan always is to see me (I'm his favorite playmate, I guess)
It's almost over.
Time with a few friends at guild.
Sleeping better last night- for a change.
Posted by Martha Lorshbaugh at 1:03 PM