Eventually, something will get finished, right?

In an effort to post more often, I decided to show some of the many projects I'm working on.  But first, here's some of the precious little ones I get to spend my time with. 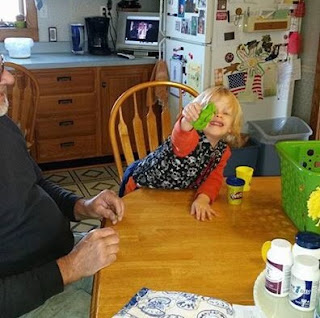 Cait and the kids came over to play with the kittens the other day. John runs out of patience with the kittens faster than the girls do, so we went downstairs and played with play-doh for a while.  Papa was there, and helped Jon make an elephant.  Jon's favorite part was smushing it! 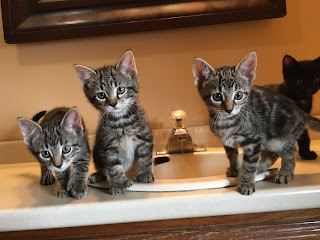 The kittens are growing up fast.  In another few weeks, they'll be ready for their furever homes- just in time to go into lucky little ones' stockings? 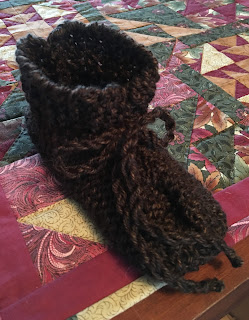 The floors are cold in my house and visitors don't always have slippers.  So I decided to make a few pairs using an easy pattern and some odd balls of yarn I have sitting around.  These are the smallest ones, but they still look big for Jon. 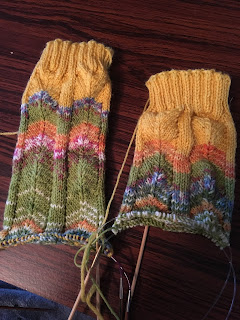 I started these socks months ago.  They are a mix of leftovers from several  pairs of socks I have made in the past.  (Actually the yellow is from a skein I bought to make tiny bumble bees) I thought using the chevron pattern would highlight the stripes.  Someday they'll be done. 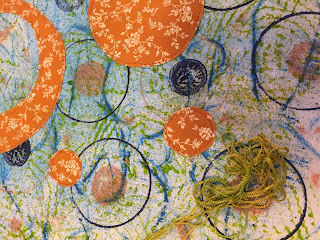 I'm still stitching on my embellishment projects now and then.  This one is going to get lots of stuff added to it, I think.  For now I'm using this sort of knitted thread I got in one of those "Oliver twists"  and adding some more circles to the background. 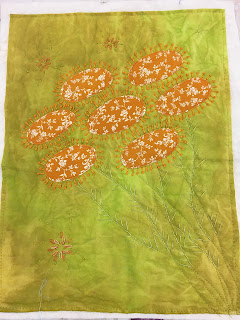 This is the one I have worked on the most, obviously.  It's almost ready for beads!  I was really pleased with the way the maidenhair stitch turned out!

I'm also trying to work on my "naughty or nice" challenge pieces.  My machine is still being hinky.  I have an appointment to have it looked at in a couple of weeks.  It hasn't been my month for machinery.  I'm pretty sure lightning hit very near my house.  My computer area was affected, and the computer probably has to be replaced.  The printer wouldn't even turn on.  I don't know if it was too much for the surge protector, or if the surge protector had been damaged in a previous power outage.  There is no way to test them that I know of.

There is so much in the news that is upsetting that I don't even want to know anymore.  But we can't let them get away with any of it.  Choose one thing if it's as upsetting and overwhelming to as it is to me. One group or organization to be your information portal, your issue to support, your opportunity to raise your voice.  Don't give in, don't give up!

I am grateful for:
A room full of kittens for the days I'm feeling magenta
Cold weather = more sewing time
Jonathan giving me big hugs and saying he loves me.
Soup in a bread bowl
Extra sewing machines!
Posted by Martha Lorshbaugh at 3:59 PM