What I did at retreat

The annual Museum Quilt Guild retreat was held at Asbury Camp and retreat center on Silver Lake last weekend.  As always, it was a wonderful time away from the world where I could sew to my heart's content!

I always bring more than I can possibly do in 4 days, but I did get a few things done!

This is another of the kit of the month projects.  I did the appliqué more than 10 years ago- by hand!  The word Welcome was supposed to be paper pieced, but I traced the letters from the pattern onto wonder under, fused it down and moved on!  I don't think I'll keep this, in spite of the fact that some of the quilting isn't very well done.  I bet someone would still buy it from the silent auction at the show in October. 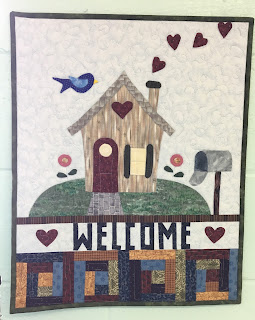 These two blocks are from a class I took with Sue Nickels quite some time ago.  They have been in the orphan block stash ever since.  I saw an ad in a quilting magazine- I'm not sure what they were selling- where they had used single quilt blocks as wall art.  I had an "aha" moment and decided to do that with these two!  I did straight line quilting with invisible thread, bound them and stuck them to the wall at the retreat center.  I'll probably hang them on the wall at work for spring. 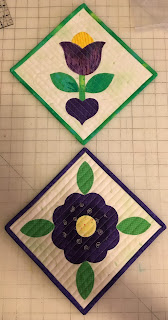 The blocks for this quilt came from what we called the block bank in my online guild.  We were making comfort quilts for members and decided to keep blocks on hand to make the process a bit faster when a need arose.  The stash became unwieldy, and he decision was made to use up what we have and go back to doing it the old way (call for blocks when we need to.  Waiting longer doesn't make the quilt less special when it arrives.)  So I laid out as many quilts as I could using the signed blocks. When I got to the bottom of the piles, I had only a few signed blocks and these bright blocks (we used the bright ones for happy occasions like milestone birthdays or retirement)  So I laid them out together.  This one will probably be donated to a charity we support for breast cancer patients. Hopefully she won't mind having signatures from ladies she's never met. 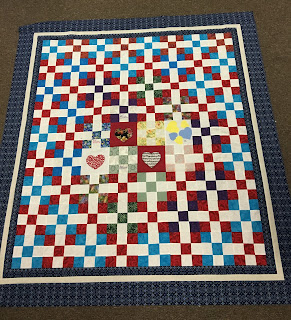 My friend Tracy took the classes with Paula Nadelstern a couple of years ago when she visited our guild. (there's even a picture of Tracy's blocks in the linked post!) When she was cleaning her sewing room, she realized she would never do anything with what she did in class, so she gave them to me.  Using one of the block layouts in Paula's "puzzle Quilts" book, I made this little wall quilt.  I call it T for Tracy.  She thinks it will look nice on her office wall. 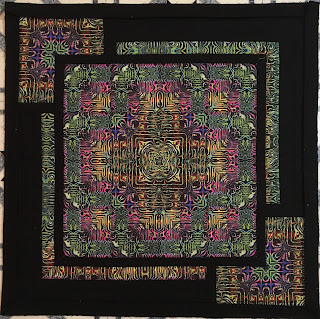 Our Community Service chair brought fabric and instructions for these surgery hats for the Golisano children's hospital.  I mad the hello kitty one.  Quick and easy! 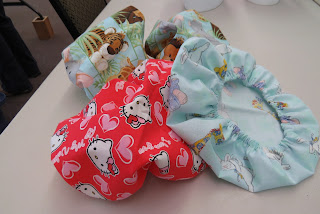 I cut strips and got some of the strip sets made for another project, but it may not see daylight again until next year's retreat.  Back to the UFOs for me.

I just read this article about the damage the fashion industry causes to our environment.  They do this because there are so many people who run to the store every chance they get to buy the latest fashion.  Then they throw out half of what they HAD to have the year before!  Appalling.  If the people don't change, neither will the industry.  Think before you buy!

I am grateful for:
The annual retreat, which has made February more bearable.
Being there for a friend who really needs someone in her corner.
It's just a cold.
I had snowdrops and crocuses blossoming before the storm on Friday. They're waiting for the snow to melt!
My husband takes pretty good care of me.
Posted by Martha Lorshbaugh at 10:25 AM