If you have a window behind your sewing machine, please be on the lookout for any cats who have come by to watch the birds! 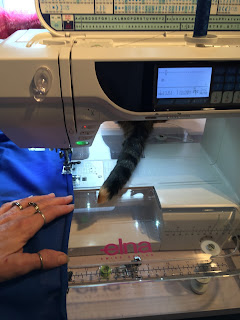 On Friday this week, I packed for retreat- only three more sleeps!!  We were all close to dancing with anticipation at the guild meeting Saturday. Like Christmastime for "old" ladies. 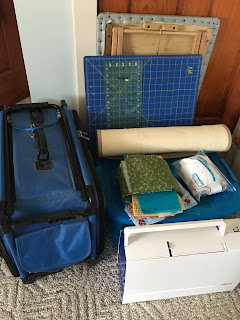 Yesterday I had both kids, one at a time.  Sort of a tag team Oma day.
Jon likes to play with Play-doh, and the cups it comes in! 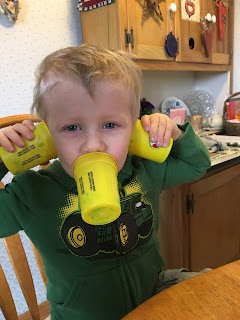 When Kiara got here, she thought she'd like to "make a craft".  So I gave her several options and she chose to make a quilt. Not for her stuffed animal, as I had thought, but for herself!  So she picked out fabrics and simple pattern- after I showed her some pictures of beginner quilts.  I did most of the piecing, but she did do some of the sewing!  This is her sewing around the edges for the "envelope" finish we did. 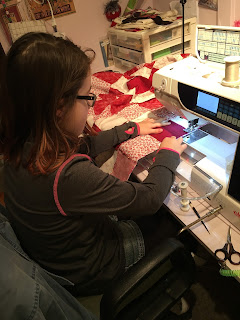 And here she is with the finished product!  It took us about 6 hours start to finish. 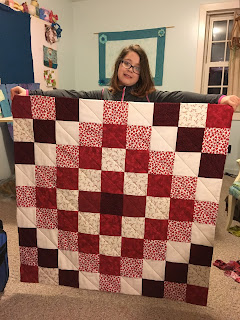 Needless to say, Oma was pooped at the end of the day.


Someone showed these on facebook, and I had to try it.  The smaller one was just to see if I could crochet a ball.  The letter doesn't show well, so I'll have to fix it.  These are f-bombs you can throw around when shouting the word might not be appropriate. 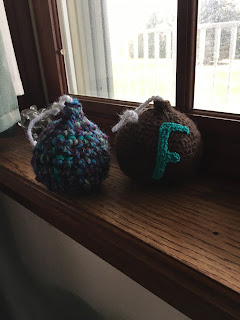 I've seen so many posts about gun control in the last few days.  Sadly, even with the body count going up and up, I doubt much will change anytime soon.  New York enacted new laws 5 years ago (I think), but did not put in place a mechanism for ensuring gun-owners replaced the higher capacity magazines with the smaller ones, or that all AR types are registered. No one is going door-to-door.  There's just too many guns and too many people who think the second amendment means they can have any gun they want and as many as they want.  I don't get it.  Most of these mass shooting victims have been children.  Are their guns really more important than someone's child?

I am grateful for:
My own little ones, may they be kept safe!
A cinnamon roll I just remembered was in the freezer.
Three more sleeps!
Warm feet.
My husband is not a picky eater.
Posted by Martha Lorshbaugh at 10:42 AM