Not as Bad as I Thought

I was thinking yesterday it had been months since I last managed to stop in and post.  Not knowing if anyone reads this anymore- since I post so sporadically- I pondered crossing it off my list.  But I'm not ready to give it up.  If nothing else, it gives me a place to figure out what year I did something.  I use my photo albums at home the same way.  (I still print pictures and put them in albums!)


The biggest news in my world since I last wrote is Everett!! 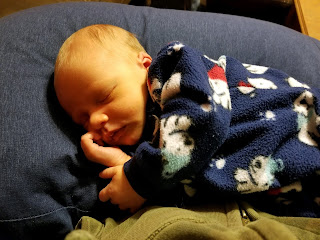 He was born 2 days before Christmas.  He had a bit of a bumpy start between a difficult delivery and a trip to the hospital for some bili light therapy.  And then just as he was getting stabilized, Oma got a cold.  It has been weeks since I have snuggled him.  (and I know how lucky I am he lives so close to me!)  I hope to make up for lost time this weekend, if his mom can tolerate me being in her way.


So, since my last post, I did finish the challenge quilt, with several days to spare.  It's called "You Can't Buy Poke-weed at the Garden Center". 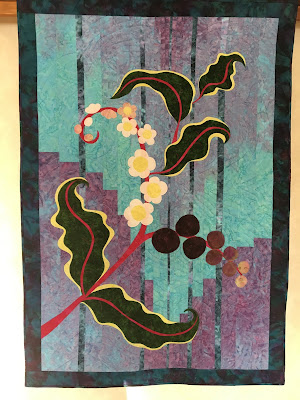 There is a story behind the title, but suffice it to say that I did indeed go to a garden store asking if they had a plant I had seen in a garden.  Once the woman realized what I was asking for, I was able to dig some at a friend's house.  This piece has been in progress for several years, since I took a class with Marija Vucjic.  Found it in an old post! (the whole story is there too) The design went through several incarnations before I found one - a doodle I did during a meeting, I think- that I really wanted to make.


I have been assessing my collection of solids, since I am taking a class with Maria Shell later this year.  I may have a palette I can work with.  But in case Maria has other ideas, I am filling a bin with a wide variety.  More is always better when it comes to fabric, right?  (I hope my kids feel that way when they have to clean out the sewing room) 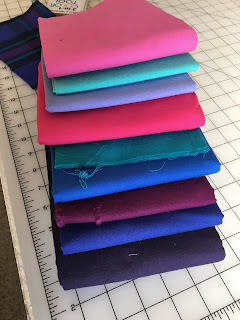 This collection is based on the colors in a scrap of fabric I used for a skirt long ago.  Taking a picture in black and white is a good way to determine if you have a nice range of values.

I have been crocheting amiguri dragons the last few weeks.  I made a few of these when Jonathan was a baby, having seen them on facebook, and knowing how much his mom loves dragons.  So she, JOn and Kiara each got one back then. 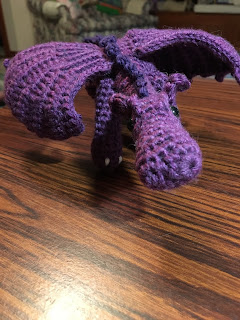 I was going to make one for a friend who also loves dragons last year for her birthday, then for Christmas.   But she finally got it, and loves it!


As long as I was at it, I always wanted one, too
Aren't they adorable?  The pattern can be found at Ravelry. 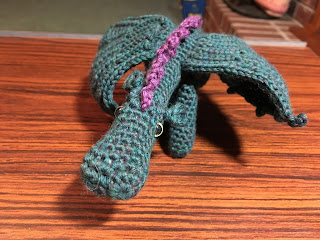 Of course, Everett will have to have one, too.

I went for my first three month check up last week.  It's hard to even begin to think of myself as a survivor yet, but the tests she ran came back negative!  After enough of those, I'll accept that it's really over.  Not yet.

I keep trying to find good news to share.  It's out there.  Small steps toward a more sustainable future. But with the people in power waging a misinformation campaign and ignoring the science, It is very hard to see them.  I am hoping New York will ban plastic bags this year.  I did find a list of a few bits of good news, if you're interested.

I am grateful for:
Negative results, and the sweetest doctor!
Friends who brighten my days
Everett making it over the hump
A husband who can make me laugh so hard it hurts
Hiding in the sewing room on bitter cold days

Posted by Martha Lorshbaugh at 3:48 PM