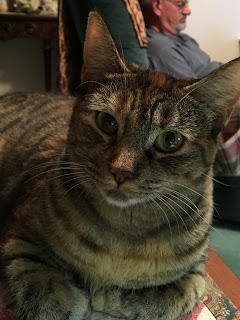 So, another busy few weeks have passed by!  Winter has been kicking our butts, giving me the good old midwinter blues.                                                                                                    But the real reason for my feeling like I'm under a dark cloud lately has to do with my very special girl, Marigold.   If you don't know the story , she was a foster kitten in 2015, who I got when she was just 4 weeks old.  At around 6 weeks, she had a seizure.  We weren't sure if a fall caused the seizure, or a seizure caused the fall.  Cats with seizures are not adoptable, due to the medical expense and vagaries of treatment, so euthanasia was recommended.  I decided to keep her a while and monitor the seizures.  She had one more that I saw, and then nothing- almost confirming that a fall caused it.  By that time, she was a permanent resident here.  She had never had another seizure until January 14, and it was a bad one.  I consulted with the veterinarians I work with at GCC.  They both said she'd probably have to go on anti-seizure medication.  A cat who hides if she sees the tube of flea medicine ( and it took two of us to get it on her) was going to need daily pilling.  Or do nothing and let the seizures get worse. After she had another nasty one 10 days later,  I chose the original option.  It was not the easy way out.  It was what I thought was best for her.  She went peacefully, not in fear or in pain.  Our house has felt pretty empty the last few weeks.
That's the meaning of the title of this post.  I have also been feeling empty.  I am lucky I have some very dear friends, and good things to help fill me back up. 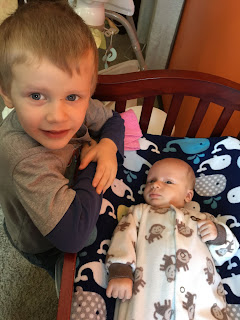 Visits with these guys always help.  I have indeed been making up for lost time last month, going over for cuddles and play time at least one day a week.

Jon is a good brother, and doesn't seem to mind that I need some time just to cuddle baby Everett. 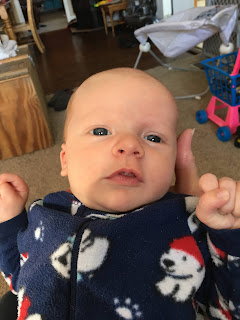 Everett is also making up for his slow start- growing like crazy!  Last time I visited , he was starting to push himself up so he could look around, and look at me, rather than just cuddling on my chest.  He almost looks like he's smiling in this one, doesn't he? 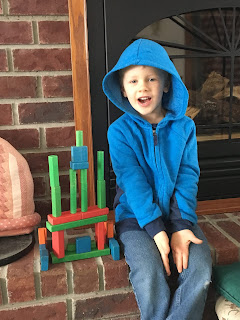 Jon was over for a while today while daddy was helping Papa.  It wasn't on my schedule for today, but nothing else was as important as watching Jon build this (all by himself- such concentration!), then having grilled cheeses sandwiches in our blanket fort. 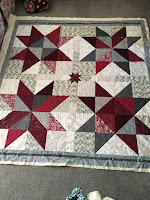 I have done a bit of sewing.  The new bed quilt went back in the "time out" chair after my sewing machine got fussy one day. I am very doubtful at this point it will make it to our bed before warm weather arrives (except maybe for a picture) 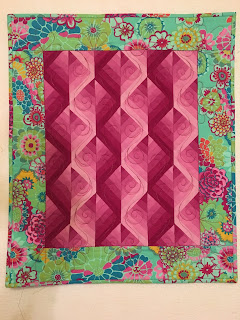 I did get this little one finished last week.  The center was for a demo I did at a guild meeting last november.  The fabrics were leftovers from my George Siciliano quilt.  Once I got the center pieced, I wondered how I was going to finish it, so went looking for a border.  In a tribute to my massive stash, I found the perfect Kaffe Fassett print waiting to be used.  I also had the perfect thread in my stash.  I titled this piece Planning is Over-rated. 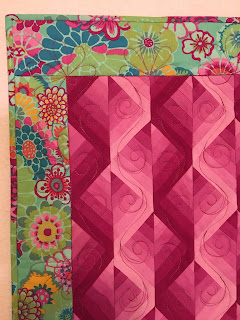 Here's a close up of my quilting. I kept it simple.  The whole piece is something like 20 x 22, and I wasn't going to do anything fancy over all those seams.


I am grateful for:
My daily hug appointment friend at work.
Caring and understanding staff at Perry Pet in Perry.
Jon, Everett and their mommy who puts up with me dropping by (I always ask first)
An interesting conversation with a friend at guild!
My husband finally agreed it was time to replace that ratty recliner!
Posted by Martha Lorshbaugh at 3:26 PM