I'd Love to Work at Nothing all Day!

So it's been a month again.  I swear I make notes to myself all the time to pop in and make a short post.  Then.. well you know!  As it is, I have been trying to write this post for three days now!

So here's a bit of what I've been up to- 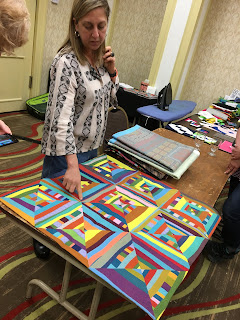 On May 31, I took a class with the amazing Maria Shell.  I bought her book last year and, with great enthusiasm, built up a stash of solids to play with.  But I was stymied by where to begin.  I have no fear of color when pulling for any quilt- it's my favorite part of the process.  But putting together a palette of solids left me frustrated beyond belief.  So I was thrilled to be able to spend a day with her- thanks to the Genesee Valley Quilt Club.

One day was not enough (is it ever when you take a class with a teacher of this caliber?)  But at least I have an idea of her process and how I can play with her techniques.  I guess I still need rules even in this kind of quilt/ art making. 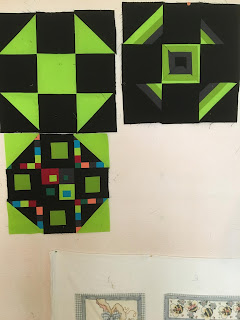 After her lecture, our assignment was to make a traditional quilt block using two high contrast colors, then "Riff on Tradition" by using elements of design to alter the block.

So the upper left block is my traditional "Shoo Fly" block.  The one upper right was the first alteration, using line.  My strip sets came out weird, which is why the outer corners are different.  But it makes it more interesting, right?

The third element was shape.  I decided to add more squares to my block, and this is the result.  I am very pleased with the progress so far.  I don't know what these blocks might be other than learning exercises.  (Maria calls these "Sketches") 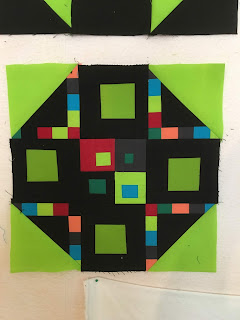 The next challenge is Modern Solids, so if this shows up in January, pretend you didn't see it here. 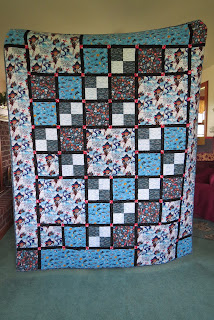 I finished Jon's "Jake the Pirate" quilt for his birthday.  In fact, he came over to play a few days before and I had decided if he asked for it, I would give it to him.  He even asked me to wrap it so he could pretend it was his birthday and open the present.

He wasn't happy until it was laying out flat on the floor, so he could look at it. I'm happy to report I have seen it being dragged around his house and on his bed. 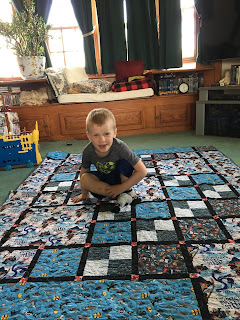 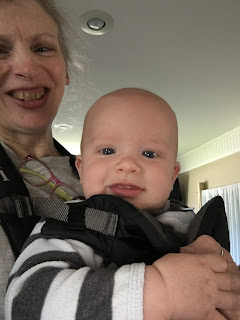 Everett is 6 months old already, and has learned how to smile for a selfie!

I'm still knitting little creatures from this book.  The bat has a fun story- 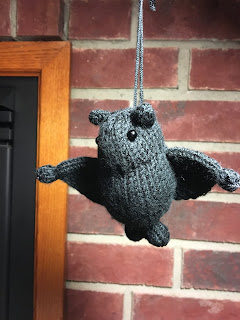 I made theblack one first using a yarn that turned out to be fussy and not much fun.  But he came out so cute, the kids were fighting over him.  Then, he disappeared.  Kiara said Jon hid it so she couldn't have it. Jon couldn't remember where.  I searched and searched after the kids left, but never found it.  Weeks passed.  The kids were over again and I tried to get them to search for him, but they weren't interested.  Finally, I decided to make the purple one. 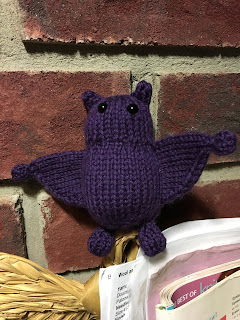 Then, as you have probably guessed, the next time Jon was over, the black one appeared out of nowhere.  I think it was folded up in a blanket- which we had used at least once during the time he was lost!!  Jon now has the black one. 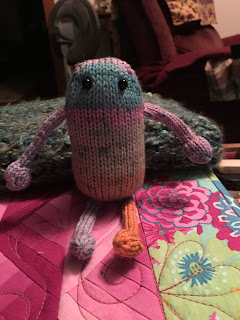 Personally, I prefer the ones that are just creatures.

The most recent one is a robot. You knit around a pipe cleaner to make his antenna. 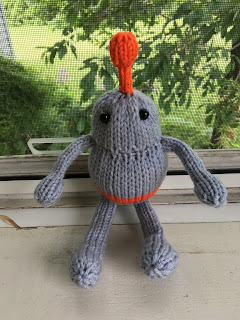 Aren't they too cute all sitting together?? 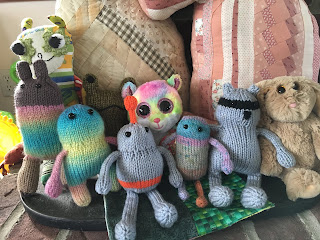 I finished the quilt for my step-granddaughter's wedding with a month to spare!  I did not quilt it.  I wanted the quilting to be wonderful, so I had a lady in my guild do it.  I know Amy will appreciate it. 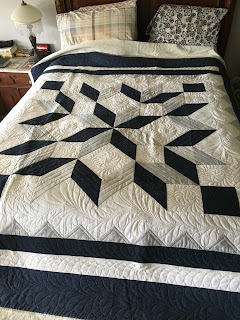 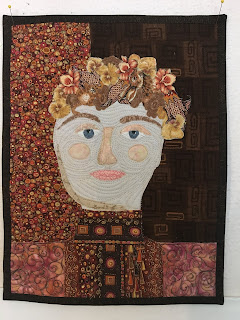 My design wall was getting full, so I decided to try and finish some of the WIPs.  My most recent finish is the collage  I started at the ArtCGirlz meeting in February.  The collage technique is from a book by Melissa Averinos.  The quilt itself was inspired by "Judith I" by Gustav Klimt.

I'm happy with the way she came out, but have no idea what I'll do with her.  I think I would like to try a more intricate collage- maybe try to do my cat. 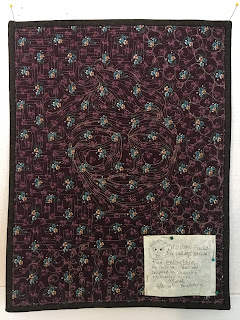 I don't know if you can see the quilting on the back.  I flipped it over after I stitched her face to see if my machine spat out anything unpleasant (I think all quilters flip their work over as soon as it comes off the machine, don't we?)  I loved the way her hair looked on the back.

I bought recycled paper toilet paper today. (Saying recycled toilet paper just sounds awful, doesn't it?) My husband will probably not like it.  I don't care.  After reading an article from the NRDC, I decided I needed to put my money where my, um, mouth is.  How "green" is your toilet paper? check it out!

I am grateful for:
A perfect summer weekend spent doing my favorite things!
Jon asking if a person was small when observing the 9 x 12" quilt I was making.
Everett always smiles when he sees me.
The baby robins have fledged, so I can use my porch again.
The nights I can sleep!
Posted by Martha Lorshbaugh at 6:18 PM