I joined a new subculture one year ago August 24- when I was diagnosed with cancer. 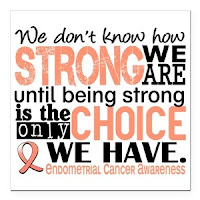 My best friend teaches a class to nurses who may wish to go into community health care, where they learn about the fact that each culture has its own language and customs, and to recognize each culture they may encounter.  I met a sociologist once who was working on her doctoral dissertation.  Her research was to study as many subcultures as she could.  I was teaching a quilt class and she spent the day with us, learning our language- fat quarters, frog stitching, HSTs, UFOs.....- and observing how we interacted with each other.
Have you ever thought about the number of subcultures you might be a member of?  Would you recognize it if you were suddenly thrust into a new one?

So, in the last year I have learned a new language- that of a cancer patient and, hopefully, survivor.   I'm one of the lucky ones. My cancer was detected very early, thanks in part to the fact that I knew something was wrong and went right to the doctor.  So there's a lot of terms in this new language that I have learned, but not experienced.  The word all cancer patients long for is "NED"- no evidence of disease.  That's where I am right now, thankfully.  One word I see often is "Cancerversary".  I googled it and discovered it can mean different things to different people.  The most common definition seems to be the day of diagnosis.  One blogger wrote:
Some days I can’t wrap my head around the reality that for the rest of my life I’m going to be celebrating the fact that another year has passed where cancer hasn’t come back into my body. 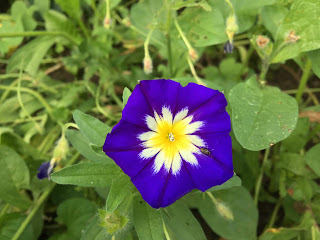 I didn't want to spend my first one dwelling on the memory of the devastation I felt a year ago.  I had thought of doing something big, away from home. But I had a long list of things to accomplish this weekend and none would get done if I was away from home.   So I went to the garden. 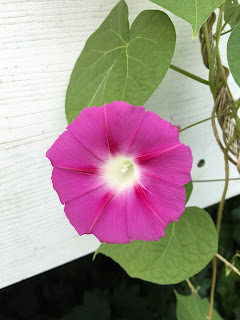 My gardens suffered after my diagnosis because I lost the last month of the season when I would normally do the last trip around to clear as many weeds as I can, thin out some of the perennials, etc.   So I decided to tackle a part of my garden where I have totally lost control.  And, without me asking, my husband came out to help.  He never helps in the garden.  I had mentioned the significance of the day to him, so maybe he was feeling it, too.  Or maybe he had nothing better to do.   But it made the day special that he dug up a patch of those invasive perennials, and helped me gather rocks for the new border I'm creating.  We also found a couple of the wonderful flat rocks I've been using as walkways to separate the perennials and give me a place to cross through the garden.  And now this spot that was a mass of messy yarrow (see  the mess on the left side?  It was all like that)   now looks like part of a well-tended garden- until the wild morning glories pop back up.  sigh. 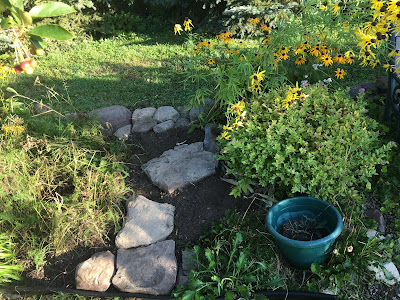 By the way, if anyone wants some rudbeckia (the black-eyed Susans), please let me know!

When we finished, we went and had ice cream.  (If anyone knows a place where the brownie sundae is a real soft gooey brownie, not crunchy chunks, please share!)  It was a good day!

I am grateful for:
An early diagnosis.
My husband.
My gardens are a lot of work, but I feel peaceful working out there (even when I'm breaking my back)
The late summer cooler nights.
Perspective
Posted by Martha Lorshbaugh at 8:19 AM