The world is what you make of it, friend. If it doesn't fit, you make alterations.


The quote above is from my favorite Western movie, "Silverado".  The character is played by Linda Hunt- way before CSI made her a household name.  It sort of fits the theme of this week's post.

I'm working on a project I still can't show.  Partly because it isn't finished (in fact I should be sitting at the machine instead of the computer right now!).  Also because it's for the challenge at Guild, which we present on January 19th.  It turned out to be a pretty ambitious project for me not to have started until  Christmas!  I can tell you there is fusible applique involved.  One of the first steps after enlarging my picture was to number the pieces.   That is when you come to terms with the amount of work involved in what you want to do.  After doing this, I have a whole new admiration for quilt artist Kathy Nida, who in a recent blog post mentioned having the fabrics selected for the 700's in her current project!!


Due to the time constraints I was working with, I decided to simplify where I could- combining pieces and reducing the amount of pieces if I thought I could achieve the same look another way.  What exact way was a question to be answered another day!  So I spent loads of time going through nearly every bin of fabric I own to find the right pieces for the numbered sections of the picture.


One of the first challenges was a striped area.  That was when I had my "AHA moment"!!  In my small art group, we have been sharing and trying new techniques for going on three years.  One of the first was watercolor crayons and oil pastels on fabric.  Easy Peasy, and perfect as it turns out!

The before picture should have been rotated so the little pattern was the same.  Sorry. 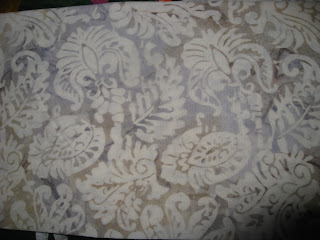 Then there was the area where the whole thing was six different pieces of the same fabric.

Nope- just use pigma brush tip markers and the watercolor crayons to define the shapes! 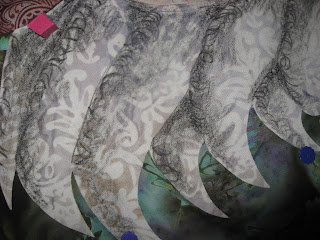 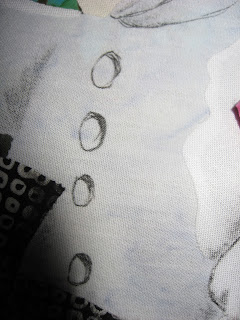 And then there's tiny details, like buttons.  They were the same color as the shirt anyway!  So ta-da!  pigma pens to the rescue!

By the way, if you want to improve your drawing skills, copying an existing picture is a great way to do it!  I think I have learned a lot about shading and definition from this project!  You may think you can't- but so did I.  Turns out, I could!

I am still making my daily comment on the 30 days of fracking regs page.  If you care at all about clean air and water and the furute of the planet- just take a minute to inform yourself.  Yesterday I learned through my readings about the group "Unshackle NY".  At first glance, they sound like all they want is to create good jobs for everyone.  But in reality it is really just a group of (probably very rich already) businessmen who only want an end to any regulation that limits their ability to take any shortcut or make any decision they want to make a lot of money with the least amount of effort on their part.  They are no friend to the environment at all!!!

I am grateful for:
The lull after the holidays.
Soup weather! (looking forward to split pea later this week!)
My boss, who gives guidance and suggestions rather than orders!
Baby steps forward.
The cookies are gone so I might stop getting fatter now.
Posted by Martha Lorshbaugh at 10:09 AM