I had a mini "vacation" this weekend since my hubby was out of town.  I know how awful that sounds. It never means I wish him gone.  It just means my days are longer when he isn't here ( in more ways than one) since I don't have to cook or follow any schedule he prefers.
So, in addition to some quality time in the garden- when it wasn't raining- I got to spend some "play" time in the sewing room! 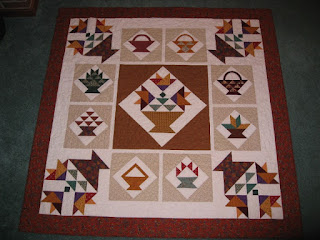 One project that has been taking a lot of my time this year is the next raffle quilt.  Last time I did bright colors and adapted a simple pattern I found in a magazine.
This time, I ended up redrafting the pattern for a block of the month quilt I created for friends over 10 years ago! (pictured to the left)

I am doing "something completely different" this time. 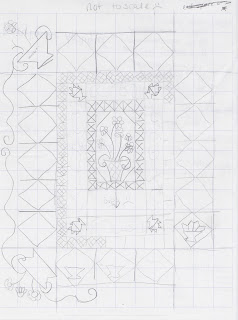 The members of the raffle quilt committee decided we didn't want a square quilt, which is where the "fun" began!
So, here is the new "pattern". (I just laugh every time someone asks me if they can see the pattern, or if there is a picture I can show them)

I've regretted agreeing to do this again at a couple of points, I admit.  But this project has allowed me to do something I have wanted to do for several years now- work in a neutral/ taupe palette. 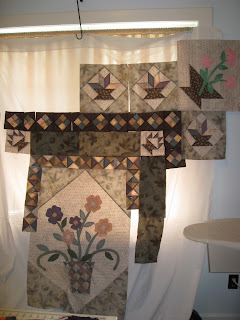 I wanted to audition the design for the corner blocks, so I pinned what I have to a sheet I pinned to the curtains.  The flowers in the corner are construction paper- used for design purposes- the real ones will match the center block!It still doesn't look like much, but I am excited to see it all put together!

In some of my sewing time, I assembled the George Siciliano blocks I finished at retreat in February.
But then I got stuck again.
I have been thinking of doing a wonky thing with them using some of the colors in the gradation I bought which were not used in the blocks. 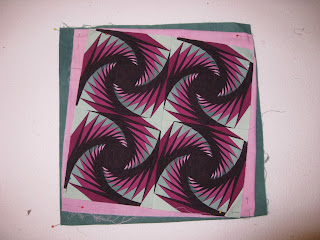 Maybe with a border?  I had fabrics I had picked out along the way to use in this project. 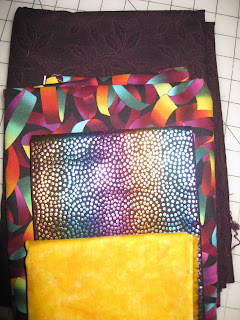 The shiny one and the yellow were originally meant to go in the center of the four block quilt- laid out the way the pattern shows it. (the sparkle for the pink and the yellow, well- for the yellow)
The other fabric was the one I used to choose my gradations for the project, so I always thought it would be a border. 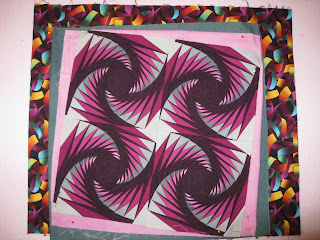 So- wonky, then a border? 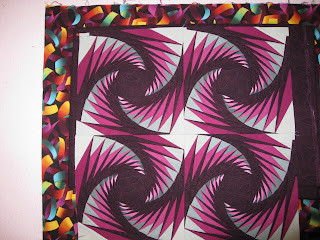 The "black" in the blocks and then the ribbon border? 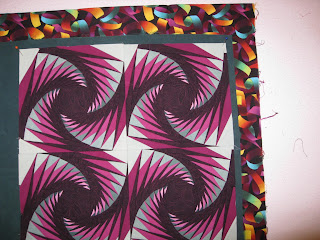 Or maybe the darkest green (very tiny pieces in the center of each block) and then the ribbons???


I also went to see "After Earth" this weekend.  Fair, not good.  It was a simple plot and a bit predictable.  But the music by James Newton Howard- one of my favorite composers- is really good.  I've been listening to it on spotify.

Interesting the movie began with humans having to abandon Earth after we destroyed it.  Sorry, folks, the same short-sighted people who think it's ok to genetically modify our food; who see no reason to put money into "green" technology; who think pumping chemicals into the ground water for a short term supply of natural gas is a safe process,  have also gutted the space program.  Unless Richard Branson or Red Bull want to help us, we are stuck here.

I am grateful for:
Knowing when to ask for help- and getting the help I need!
Sitting on the porch and reading at wine o'clock
I finally feel better!
Macaroni and cheese.
The relief of waking up from an unpleasant dream and realizing it WAS a dream.

Posted by Martha Lorshbaugh at 2:25 PM