I don't have a lot to share this week. 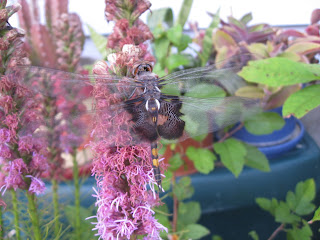 I took an awesome picture of a dragonfly I found sitting on the ground one chilly morning last week.  Not sure if he was to wet or too cold to fly.  I scooped him up and put him on the flowers next to the back door.  I was late for work, but ran in and grabbed the camera.  How many chances to get a picture like this does one have in a lifetime?


Saturday we helped Lucas move some stuff that was still in storage to the house.  I rode along because Al had been away all week and wanted the company.  Turns out I was valuable as entertainment for the "rental grandchild".  She didn't bring anything with her, but fortunately I had the i Pad with me so I had music.  It doesn't have many kid friendly apps, but we did play with "draw free" for a bit.  Then I opened the photo booth and we took goofy pictures of each other. 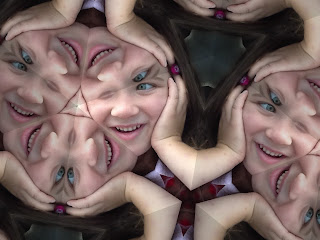 This is the kaleidescope function. I can see a quilt in this, can't you? 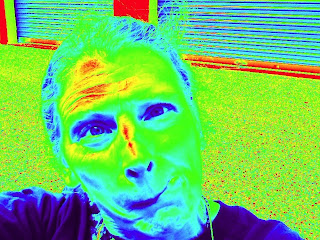 The thermal camera is fun.  (Guess where I was sunburnt)

After I looked at this picture, I was struck by how cool the gravel looked, so I took a picture of that alone.  Is that not the coolest? 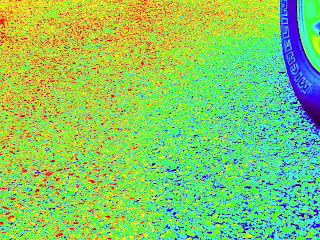 Last week was what we call PAD week at the college. Meetings, welcome back- sort of all hands on deck before the students come back.  The president gives a speech at the start of the semester.  I always bring some zentangle tiles along to keep my mind from drifting off.  (it's true!  There was a study). 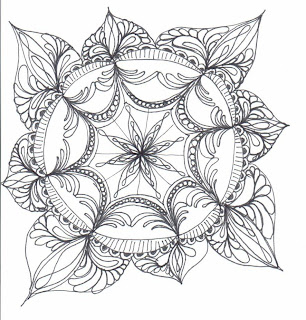 With my mandala quilt in mind, I made this.  I think most of it is doable as the quilting!  I'll let you know- soon I hope.


In green thoughts this week, I have decided to toss one of my cloth napkins into the bottom of my bag.  I ate a messy sandwich at a restaurant today where they put out a roll of paper towels in stead of giving napkins.  I used three!  Not only will I save wasting paper in the future, but how many times have I gone into a restroom when I'm out and the only option is a blow dryer that blows as hard as a two year old blowing birthday candles out?  Problem solved!

I am grateful for:
Small joys to get me through rough days
Feeling valuable (or is it valued?)
George's tummy is better!
The end of weeding season is in sight!
When the kittens want to cuddle as soon as I walk into the "nursery"


Posted by Martha Lorshbaugh at 5:24 PM