Some of you may have heard of Bonnie Hunter's "Leaders and Enders" concept before.  (If not, follow the link!  :-)
How it works basically is that you keep squares at the sewing machine that need to be pieced into units for a quilt and you do  them at the beginning and ending of whatever you are doing- chain piecing, sewing rows together, adding borders....
And you get all the little boring piecing done a little at a time with very little investment of time! So, a bonus! (the quilt to the left was made with units I sewed this way) 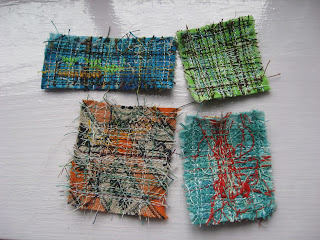 When I first saw this, I thought "Now why didn't I think of that!!?"
I had been using a folded piece of fabric to hold the threads in between chain piecing , or quilt assembly.
I ended up with a nice collection of these.  I saved a few thinking to use them in an art quilt at some point.

These are the units I have been working on for the last few months.  (the bonus quilts are not made quickly as you may guess) 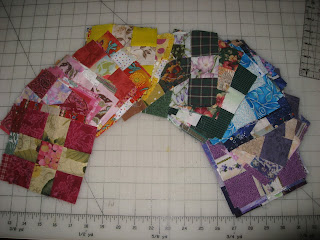 The nine patches are all made with the 2 inch squares out of my scrap therapy bins.  You have to use those things because they multiply so quickly! 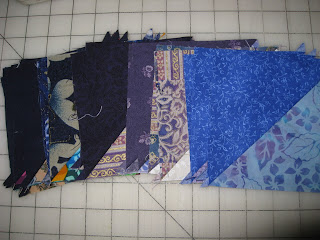 In order to make the HST units fit the nine patches, I had to cut them a bit larger than the scrap therapy squares (or waste half of each set of squares)
But that allowed me to cut up and now USE a nice pile of scraps! 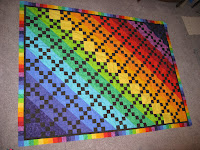 These will be laid out in a rainbow of sorts, inspired by this quilt raffled off by my guild last year. 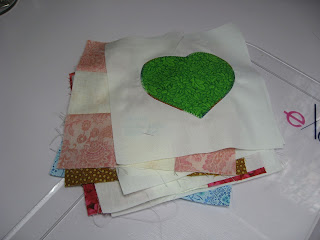 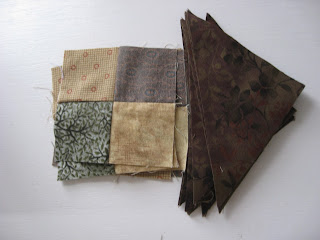 Last week I was working on blocks for one quilt while assembling the rows of another.


This is my stack of blocks to be sewn into a row.

And these little four patches needed to have their setting triangles sewn on. So they are basically my bonus project. 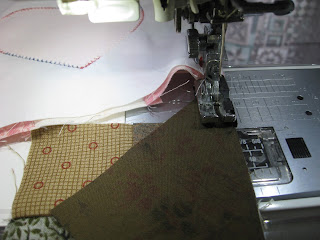 Sew two of the row blocks together, then send the four patch with a triangle on behind it.


Cut the row blocks off in back and add the next block in the row.  Repeat as many times as needed. 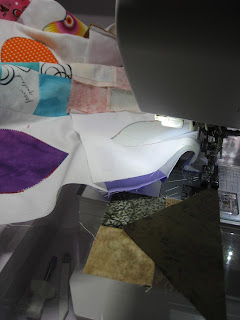 It even works when sewing the rows together!


At the end of the day all my rows were assembled and all my four patches had been set on point!  I always say I never do one thing at a time!  No wonder I love this technique!  (Thanks, Bonnie)


The ArtCGirlz will be exhibiting the results of our mandala challenge in September.  I had played with the fabric painting and not loved any of the results.  So I was trying to think of how else to create a mandala type quilt for the project.  Then I remembered a project Jane Sassaman had done some time ago and I had hoped to try.  It has been on the "just for me" list ever since.  I had even kitted up some fabric with the book and templates (these are called PIGS, I believe). 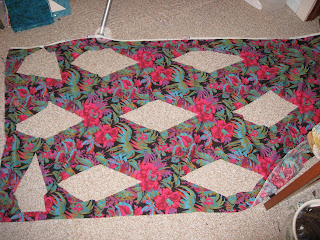 I made a nice Swiss cheese out of the fabric 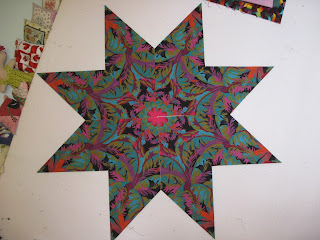 These are the options for the center of my LeMoyne Star mandala.  I think I prefer the first one with the spider web kind of look. 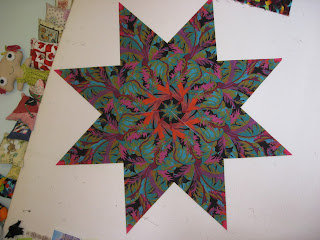 I haven't, however, abandoned the idea of using one of my painted pieces for a zendala.

I listen to a lot of Pandora radio.  Lately there have been commercials touting the wondrous benefits to a person allowing frackers on their land- and the whole fracking industry.  (Double entendre intended here!)
The ad is paid for by the oil and gas industry.  It is important to know the source of information when you intend to be informed on an issue.  Here in NY there is a lot of information going around because the state is still pondering whether or not to allow fracking in the Marcellus shale area- the beautiful Finger Lakes region! (where most of my wine comes from!!!)  The same holds true of diet advice, financial information, product reviews.....  Make sure you know WHO motivated the information.  Does anyone think the oil and gas industry would ever admit to a report proving that fracking is poisoning the water and the air???

I am grateful for:
a day to myself
friends who are as silly as I am
Al still hasn't kicked me or the kittens (7 of them now) out to the curb
nice chilly nights to sleep with lots of blankets and the windows open
impromptu gatherings
Posted by Martha Lorshbaugh at 1:26 PM