An awful lof of work for something nobody will see! 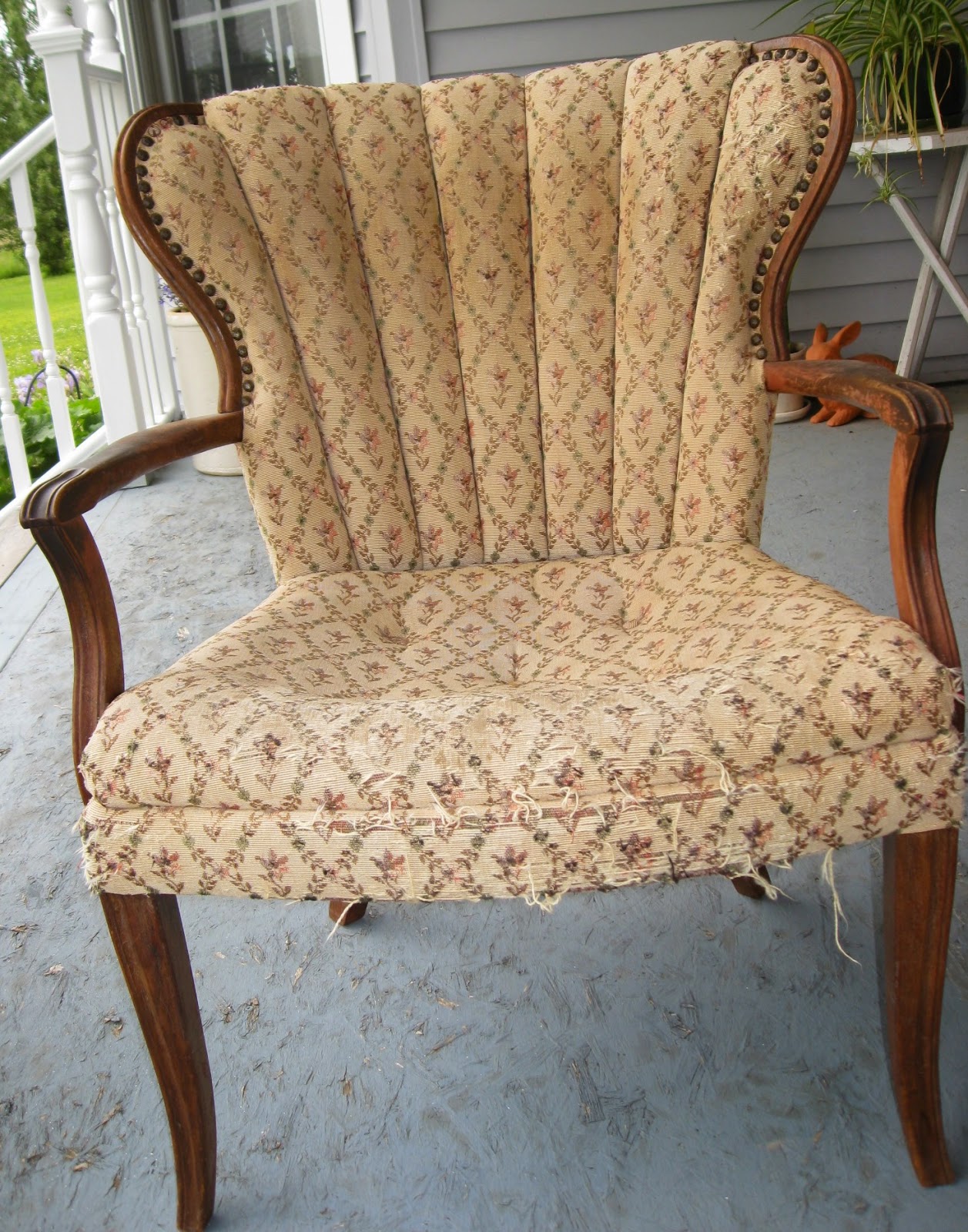 Some time around 2009, Jane Sassaman's "Prairie Gothic" line was released.  This line included some home decorating weight fabrics for the first time!  I had found this chair at the thrift store and planned to recover it to use in my studio/ guest room.  So it was perfect timing!

I had only done simple upholstery- you know wrap and tack stuff.  So when I first began to take this apart, taking pictures as I went, I realized I needed to have everything in place to finish it as soon as possible after dis-assembly so as not to forget how it came apart!

That is only one of the reasons it sat for 5 years.  (usually it was covered with piles of fabric anyway)


But finally this year I decided to do it, so I spent a few weeks in late summer taking it apart the rest of the way. 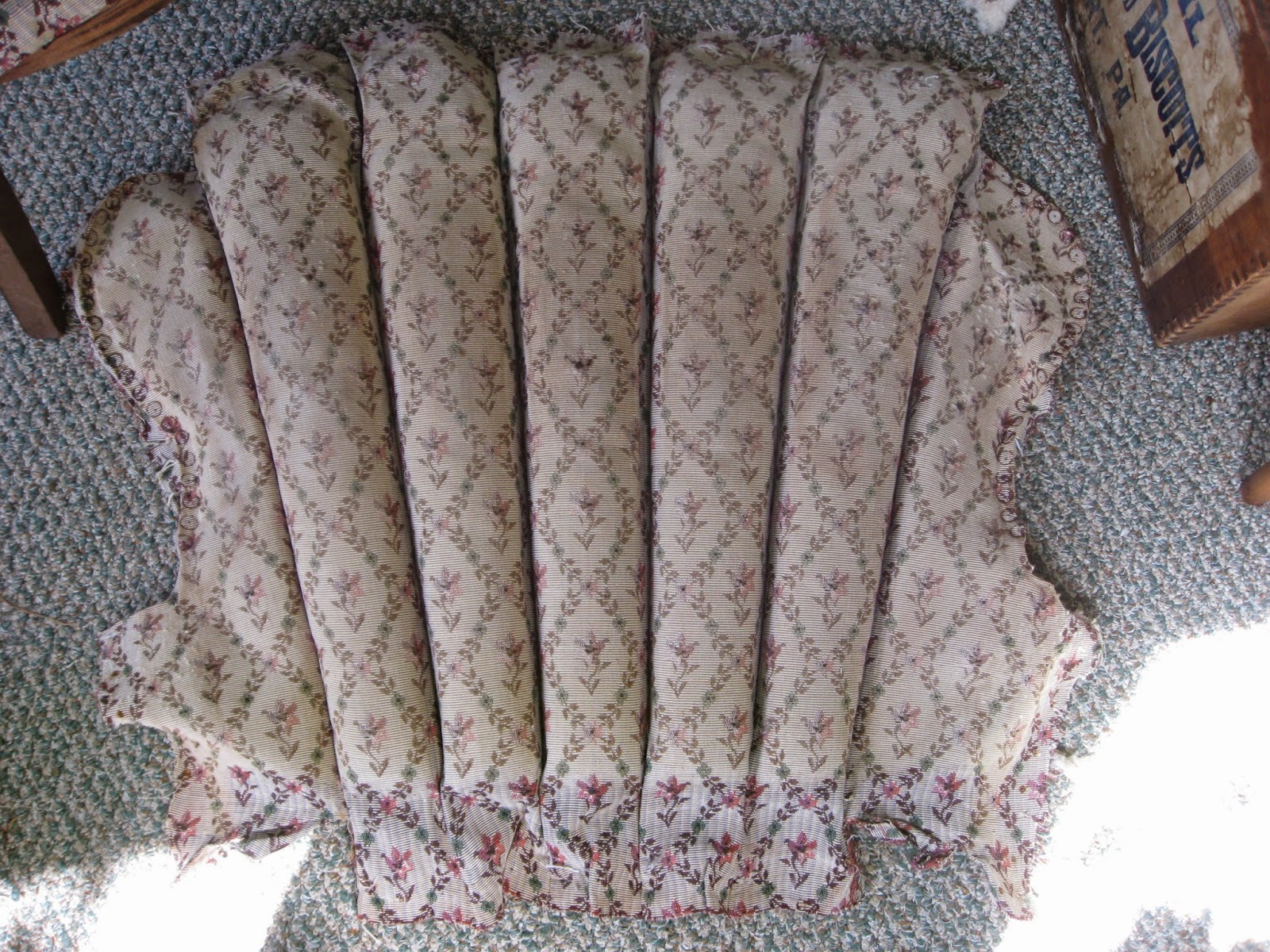 This clam shell bit was the scariest part for me.  I could see how it was made but I wasn't about the take this apart until JUST before I wanted to cut the new fabric. 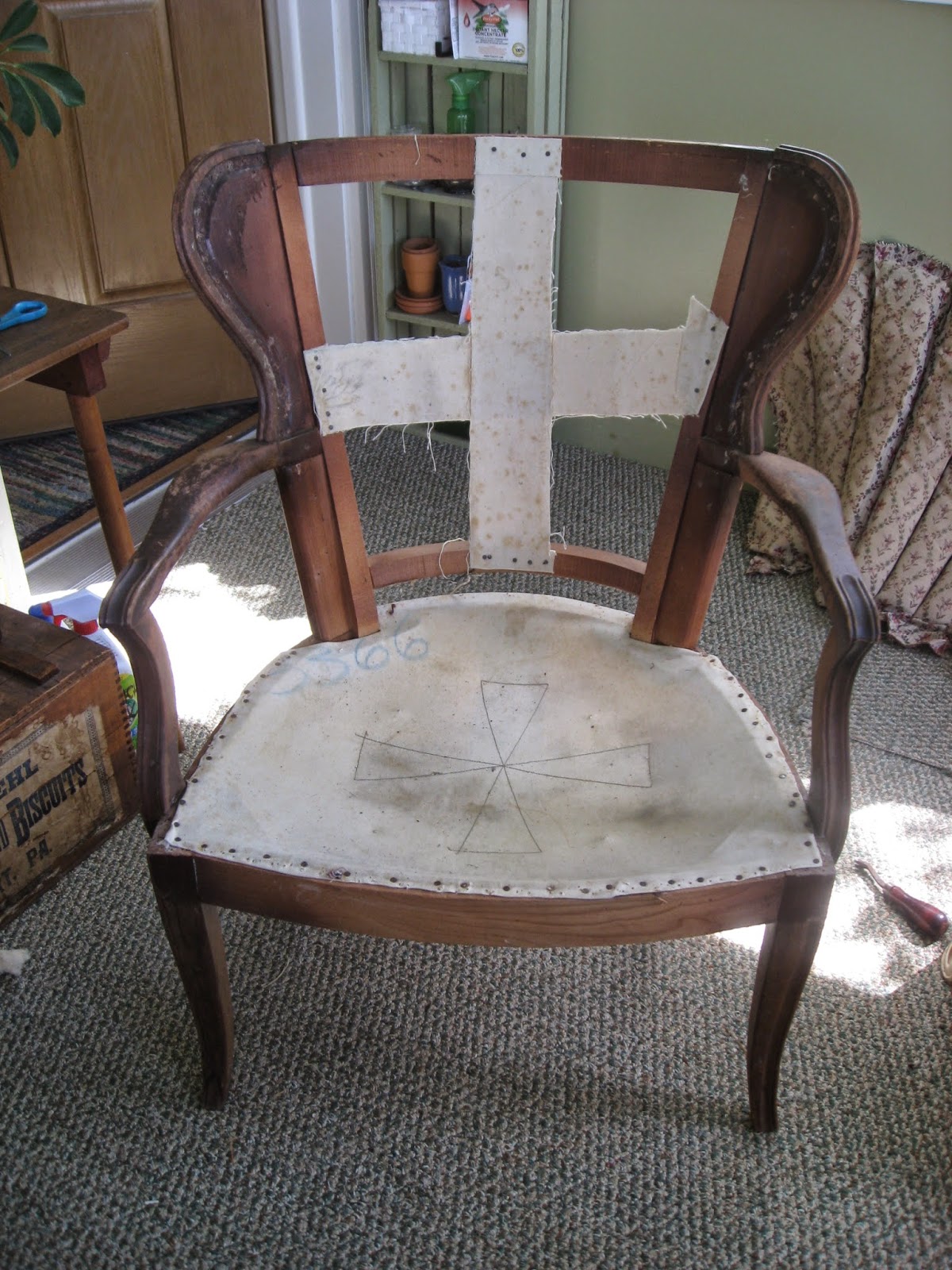 And once I had nothing but a bare frame there was sanding and repainting to accomplish.  The webbing was still sound, thank goodness!


Right after the quilt show, I decided the very first thing I would do was finish the chair.  Which obviously it wasn't.  So when the Thanksgiving break came along at work, I made this my "weekend" project.


You know everything takes longer than you think, right?  Especially when I still had so little real idea of what I was doing.  I quickly found I didn't take anywhere near enough pictures!
I figured it out as I went, and there are plenty of spots where anyone who knows about upholstery will just shake their head!

But finally I have a "brand new" chair! 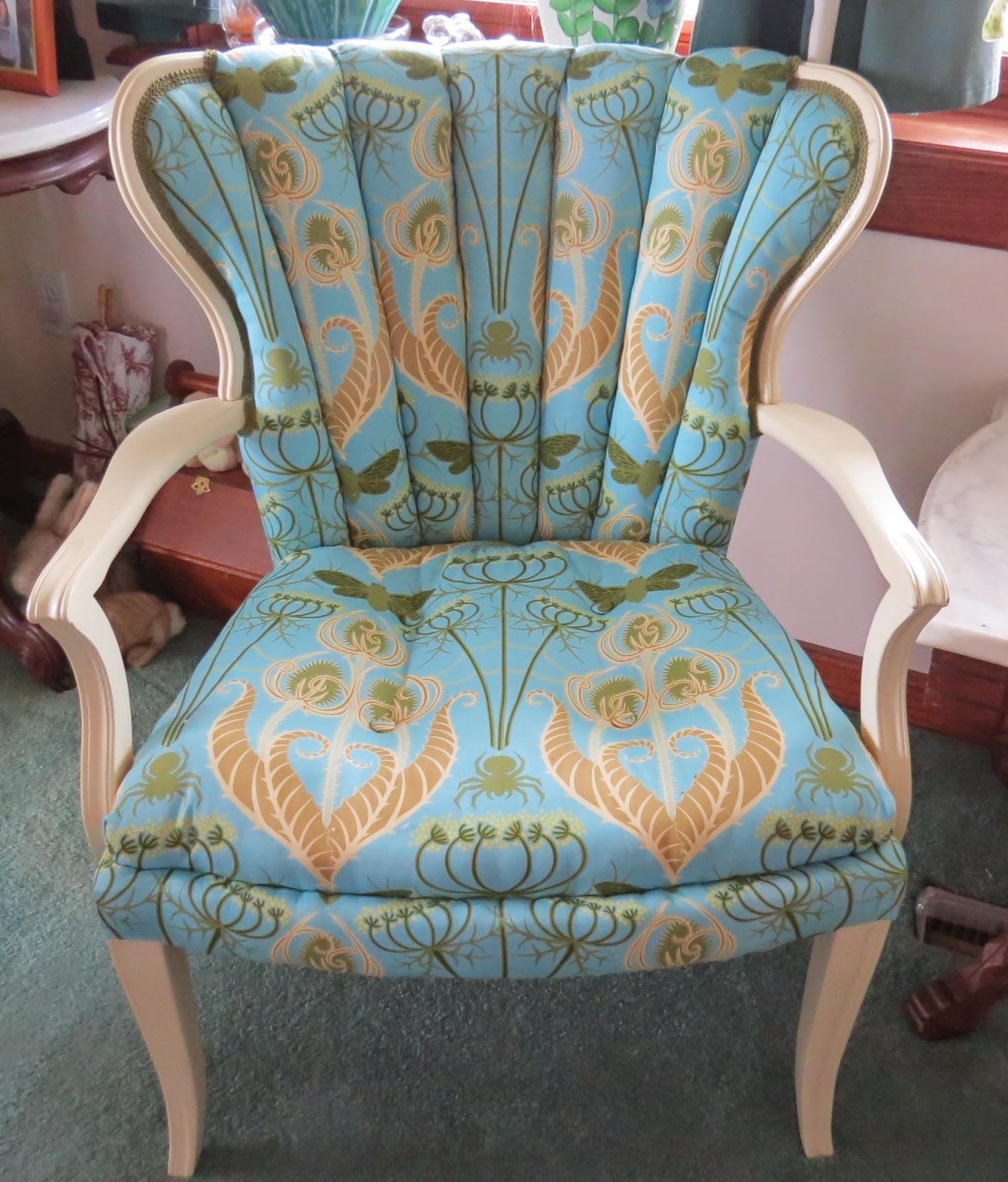 I elected not to spend more than the chair and the fabric combined on decorative nails for around the edge.  (I did not want the ugly ones available locally!  They have beautiful ones here- if you are determined to spend more money on your project)


I don't know why this is sideways.  I saved it three ways upright and it turned when I uploaded it here.  So you get neck exercise. This is just to show off the fabric.  Notice I put the spider in the center! 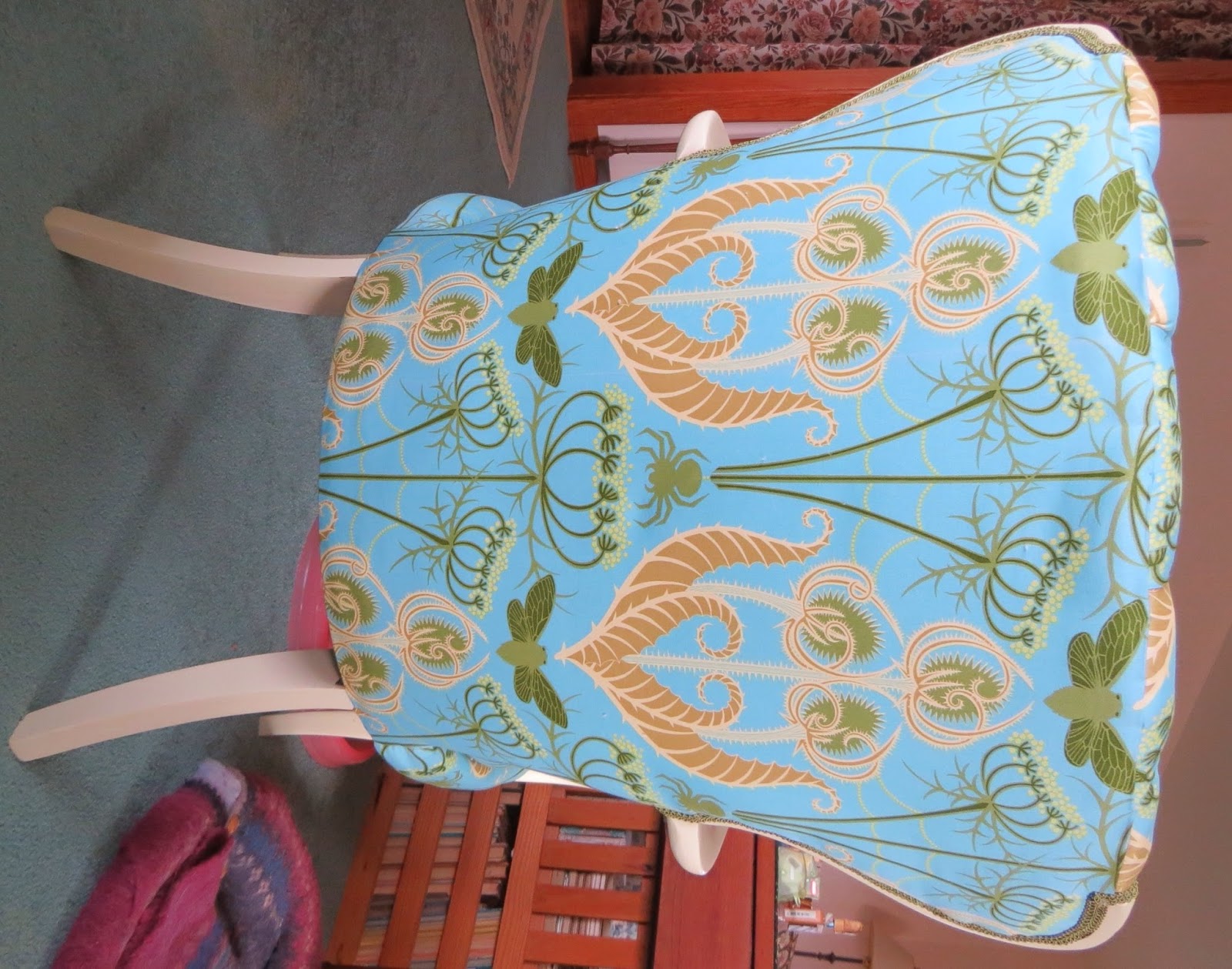 The chair has a temporary home in the living room so I can admire it for a couple of weeks.  Then it will live in the studio with me.  Now that we have a true guest room, there is a chance no one will ever see this but me.  I am vowing not to cover it with piles of fabric now that it is refinished- although that _would_ keep it from fading..... 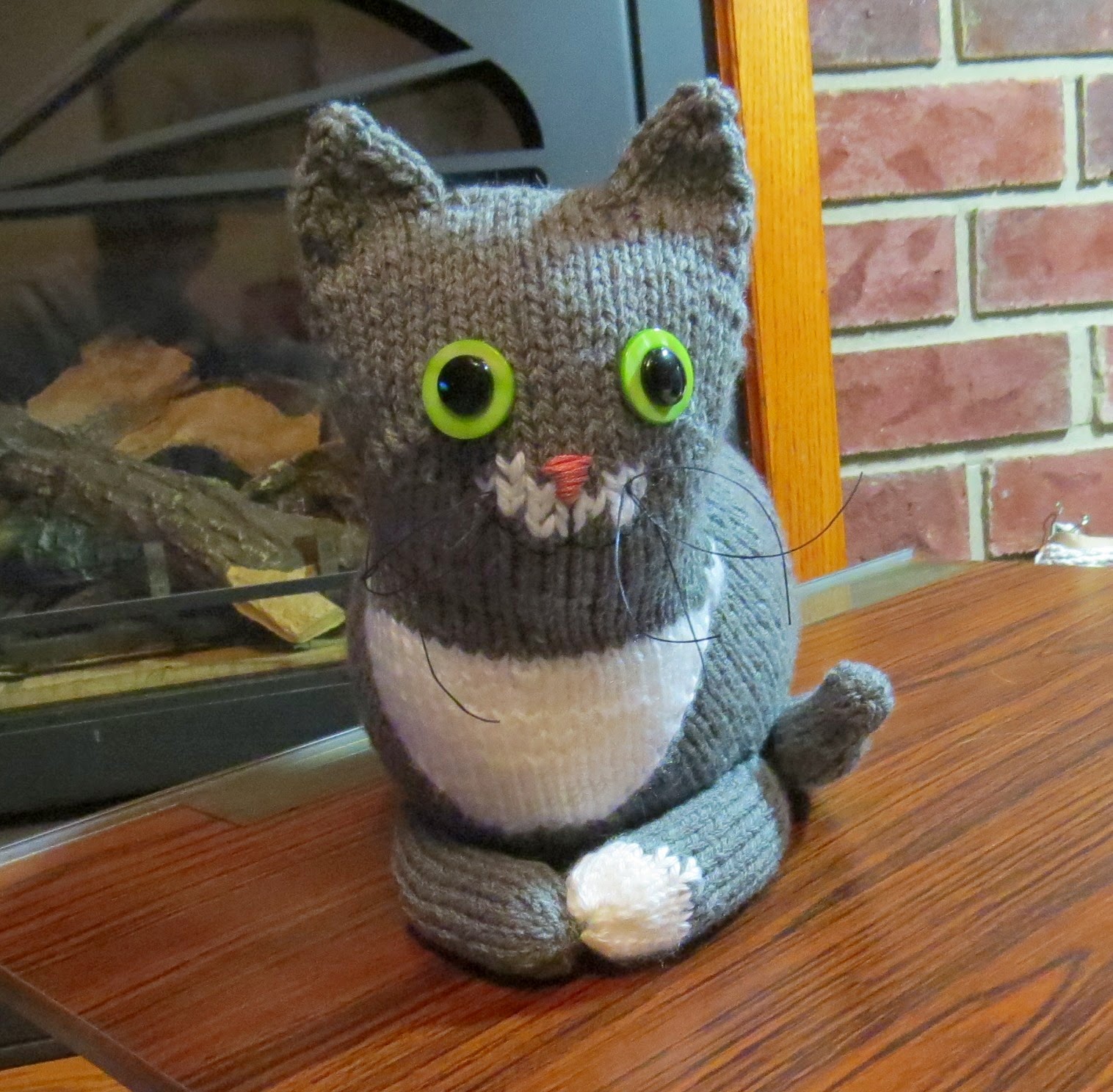 I knitted another kitty for Sandy- one of the other cat ladies, who was there to help me for more than the first year I worked at the shelter.  I owe her a lot.  But all she has asked for so far is a kitty.


In New York, we are waiting for the health department to release their report on "Fracking".  The governor said it would be out by the end of the year. This report is supposed to be the final study to determine whether or not fracking will be allowed in New York or not.  I can't believe they are still considering it.  It seems like every day I read another risk associated with this process.  The most recent one is an increase in miscarriages, birth defects and infertility.
I would really like to post positive environmental news.  I will when I find some.

I am grateful for:
The big part of my Christmas shopping is done.
The insurance company finally sent a bill so I can pay it!
Christmas music.  (yup, I'm one of "those" people)
Snuggling under a quilt.
More kittens to play with. (pictures soon)


Posted by Martha Lorshbaugh at 3:33 PM