So, with no looming deadlines in the sewing room, I wasn't sure what to work on next.  There's too much to choose from!!
Then I remembered I agreed to do a demo back to front machine binding at the November guild meeting.
I was surprised they asked me to do this, in all honesty, as I thought this was a fairly well-known technique.  So, first I needed something to show people what I am doing.  I dug through the pile of UFO's, but most of them are bigger than I thought I needed. 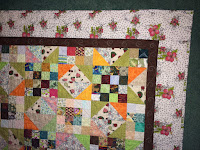 Then I ran across a small pile of HST blocks left from this quilt.


They were all orange, and I was on the verge of throwing them out, when I thought of making pinwheels with them.  There were enough for 6 pinwheel blocks at about 6" unfinished.  So, what to put with them??? 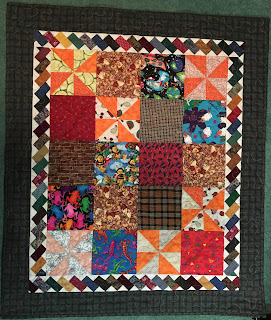 I dug into the box of scraps my friend Carol gave me a couple of years ago, because I remembered there were some 6 or 6 1/2" squares in there.  Tada!!  There were even kids prints in there, so I added them in a sort of evenly spaced arrangement.  It made for a small quilt, so it needed borders.  I was about to start digging through the stash for something appropriate, when I remembered some seminole style borders I had leftover from another project quite a while ago.  Then I added a plain-ish border and had a nice sized crib or cuddle quilt.  I had a piece of flannel laying around from making receiving blankets, perfect size for the back!!  To finish quickly, I did a large stipple over the whole quilt.  Turns out, I break the thread more doing this than the dense quilting on that last one for the quilt show- something about going backwards gives my machine free-motion sickness! 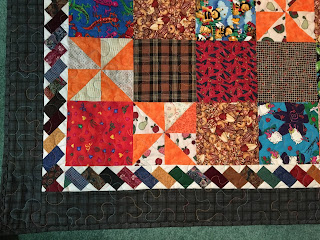 In all honesty, I wasn't thrilled with the way the binding came out once it was finished.  I was using the smaller machine and it doesn't have as many stitches to choose from.  I should have used the feather stitch. Sigh.  But it's ready; and once I'm done with the demo, I can hope that a child suffering a family upheaval or illness will be comforted by it.  It's kind of an I-spy quilt, too!  The most fun part is the sheep glow in the dark!

Making this project so quickly was just what I needed to lift my spirits last week. I don't know what was troubling me, but I was in a dark place.  What is it about sewing, creating, that makes us feel better???

It's not easy to find good news regarding climate change, but a recent report released by the International Energy Agency tells that 2015 was a banner year for renewable power, marking the first time that total installed renewable capacity passed coal.   It won't be fast or easy.  I know the coal industry will suffer in the short term.  It won't be easy for the places where the local economy runs on it.  Hopefully the jobs in renewable energy will come to them as more and more production areas come online.  A side benefit to this is that, with the increase in the number of people driving hybrid or electric cars, there will be a reduction in CO2 emissions there as well!! (If you're interested, there's a good opinion piece here)

I am grateful for:
Lots of time with the kids last week.
Lucas finally solved his water issues!
Keeping in touch with loved ones far away.
The kittens are both improving!
The days when I feel like I have a clue.


Posted by Martha Lorshbaugh at 11:31 AM