Last week I showed just a portion of my challenge quilts.  We presented them at the guild meeting last Saturday, so now I can show you!

My first impulse after hearing the theme was, of course, drinking.  (I'm not a bar fly, but anyone who knows me knows how much I look forward to my afternoon glass of wine!)
So I set about collecting fabrics with drinks on them.  I was a bit disappointed that so many were on black backgrounds.  Then the idea of famous bars came to mind as a way to have actual bars on my quilt.  I then collected images from the internet for bars I thought would be recognizable to fans of the movies and shows.  ( I left out "Cheers", feeling it was too obvious) 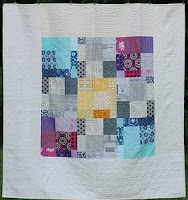 I decided it would be a nine patch design..  I found a modern nine patch quilt I really liked, so decided to use that as my base quilt.Now that it's done, I have decided that using the prints I did, this was a mistake. 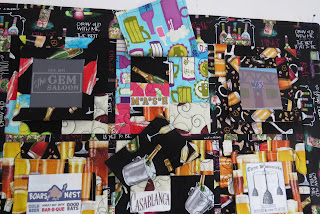 Such is life.  You can see the base quilt here, under the flaps.  This is where I put the name of the tv show or movie.  The logo of the bar is on a flap which covers it up.  So it's sort of a game. 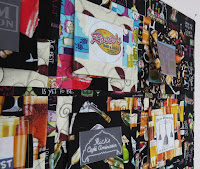 This is the completed quilt.    Can you guess all the answers?? (they're at the bottom of this post.) 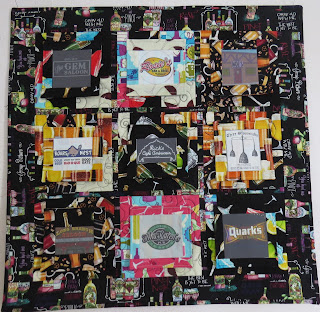 I don't love this quilt, and will have little use for it once the challenge exhibit is over.  I'm thinking it will end up as a case for my knitting needles. The flaps will make great pockets!


My second challenge entry is called Alien Plant Life.  I had bought the pattern, called Shenandoah, by  Creative Sewlutions, a couple of years ago.  I hadn't really thought of it for the challenge until I saw the floral fabric.  I was on vacation, visiting Roswell, New Mexico.  We had toured the UFO Museum, and I had noticed a quilt shop just across the street.  Surely they would have fabric with aliens on it, and wouldn't that be the perfect souvenir?!?!!  Well, they didn't.  But when I spotted this fabric, inspiration struck! 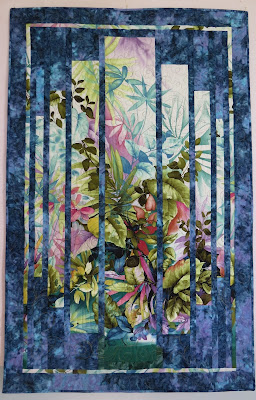 Since there are no aliens in the fabric, I quilted some on it.  The one on the ground is pretty tough to spot., so I blurred the edges in this photo to help.  He's waving to another alien... 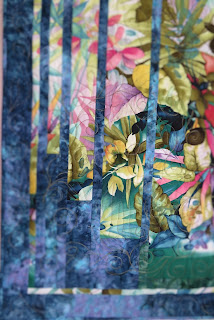 ...who is flying off to explore the stars. 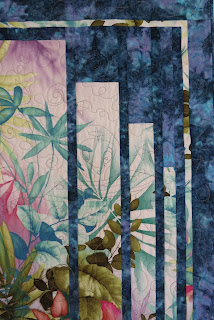 This was a fun challenge.  I can't wait to hear the theme for the next one! (Of course that doesn't mean I'll have it finished before Christmas.)
You can see more of the quilts here- and soon, all of them will be at the guild blog.

Al Gore has made a sequel to "An Inconvenient Truth".  It won't be out until July, but I can only hope the sequel urges as many people to action as the first one did.  Climate deniers like to say the planet has undergone temperature shifts in the geological past.  True.  How many species survived those shifts?  The Earth will survive humans, but humans cannot survive if there isn't clean air or water, or food.

I am grateful for:
The women who marched and gave a voice to those of us who couldn't.
I didn't fall off the roof.
A day with Jonathan
We've had almost enough rain/ snow so far this winter to recover from last summer's drought.
Only 28 days until retreat!!

Posted by Martha Lorshbaugh at 9:59 AM