I've had very little sewing time the past few weeks, so not much is getting done. Every so often I throw something in the design wall just to ponder for a few days, or until I need the space. This is what it looks like today- yesterday, since I tried doing this from my phone while waiting. 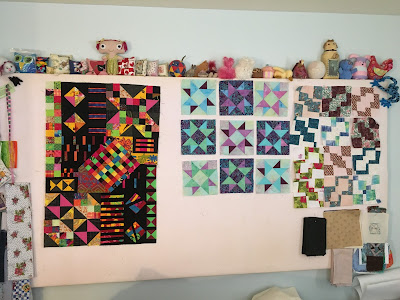 Kind of a mess, right? The one on the left is random bits from a couple of projects I sewed together.  Every so often I look at it and try to decide if it's worth hanging on to.
In the center is blocks I made for a swap that flopped.  I'm thinking of making them into a curtain for the sewing room.  The one I have in there is pretty faded.
On the right is wonky disappearing 4 patch blocks I do when I want to sew but don't have time to get involved in a project.  Below them is fabric waiting to become blocks, the fabrics I might frame them with to unify them into a quilt, and some random crap.

On the far left is fabric I'll probably use as a border for something else.  On top are pincushions I received in swaps, as gifts, or made extras of.

I've been pondering quilting designs for my UFO #11. I printed a couple of copies of the picture in black and white to doodle on.  I think I know what I want to do for the most part.  I need to doodle some more before I get it under the needle. 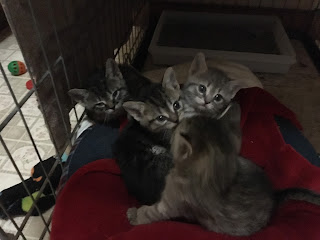 My first batch of foster kittens for the year were only about 4 weeks old when we got them- far too young to be away from mom.  But they went right to the mush for the first 3 days.  I knew it was too easy.  For the next 3 they refused to eat, and had developed diarrhea- which can be fatal to tiny kittens.  I called on everything I know to help them and might have gotten us back to where I started a week ago.  I hope.  Now they have some catching up to do!


Sorry, coal miners- your jobs are gone forever.  Here's a sure sign- the Coal museum in Kentucky is going solar to save money!

I am grateful for:
The kind words of a person who had no idea how bad my day had been going.
I worked in the garden Monday!
My cold is already clearing up. (shh)
Knowing most of what I needed to do
Sleeping with the windows open.
Posted by Martha Lorshbaugh at 12:52 PM