Sorry this is Boring

Remember last week when I said my cold was getting better?  Yeah, it got worse again last weekend.  I went home early not long after that post was finished, and collapsed into bed.  The next day was Good Friday, which is a flex day for the full time folks.  I had planned to work since I don't get paid if I don't- funny how that works!- but I stayed home and slept all day instead.  Good choice. They frown on me being in my jammies, wrapped in two or three blankets, in the office.
On Saturday, I felt well enough to be upright for a few minutes.  So I did a load of laundry.  When I didn't pass out from that, I watered the plants.  And so the day went- I survived one job and moved on to the next.  I did take short breaks, but never needed a lie down. I even went outside to enjoy the fresh air and pluck a few weeds!
By Sunday I decided I would live, although I still wasn't enjoying it very much.  We took some gifts over to the kids for Easter.  I got the greatest gift!  Jonathan has reached the age where, when I arrive, he runs to me shouting "Ama!" (his word for Oma, my preferred appellation) and gives me a big hug!  Is there a better feeling in all the world?

So I was three days slow again.  It's a good thing the kittens had gotten their appetites back.  If I had been this sick a week ago, the poor babies wouldn't have made it, I fear.  But they are growing and frolicking around the nursery just like nothing ever happened, thank goodness! There are still four, but one was running an errand when I had the camera out.

I think I have made enough "Lil Birdies" for now.  I wasn't making them for Easter, but they would be cute for that, I guess.  I plan to take them to the kids down the street where I buy my eggs.  I know, they should probably all be the same.  I was trying to use up scraps of yarn. 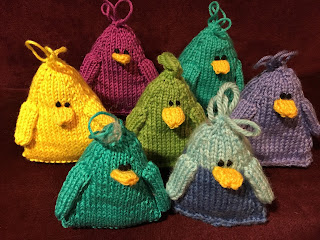 And I finally got my UFO #11 layered and got the quilting started.  I ended up doing a simpler poinsettia thing in the star blocks and will do a variety of fillers in the sashing and borders. If the weather is bad this weekend, I might even get it done this month.  That would make one finished object a month so far this year!! 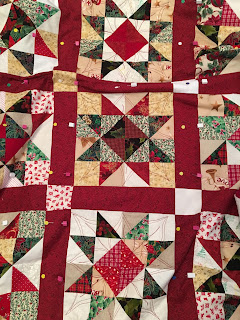 The People's Climate March is next week.  I'm not sure why it isn't on Earth Day- that's when they're doing the Science March.  I'd love to do both, but am unable to do either for a variety of reasons.  I am showing my support by sending postcards to relevant offices in Washington, DC.  One voice may not make much of a sound, but many voices must be heard.  If nothing else, this divisive time has created a surge in activism. It's about time the complacency came to and end!

I am grateful for:
Finally feeling better!
Comfort food
Grandchildren
Sitting outside enjoying sunshine and fresh air
A few minutes of meditation


Posted by Martha Lorshbaugh at 3:49 PM