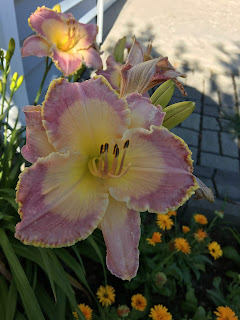 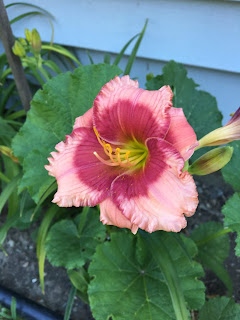 Somehow, I never learned to appreciate how beautiful day lilies are until a few years ago.  These are both next to the walkway between the house and garage, so I can enjoy every blossom! 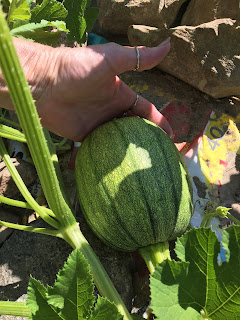 Summer is almost half over.  I am not a summer lover, as you may know.  This year is a perfect reason why- it has been unrelentingly HOT. It has also not rained much in weeks, so every day I haul water to the gardens.  I live on a well, so don't use the hose if I can avoid it.  So watering the plants means hauling buckets inside, collecting water from doing dishes (I don't have a dishwasher, by choice), and even sharing my shower with a bucket to collect water.  Then I lug the buckets outside and try to pick the driest spot each day.  So most spots were getting water about once a week.  The exception was my pumpkins and zucchini.
I have about half a dozen little pumpkins coming.  This picture is from last week, so the fruit is about twice that size now!
Thankfully, we have had two days of good soaking rain this week, with the promise of more later today! We take water for granted in the US. (More on that later)

Other than the gardens, I'm spending a couple of evenings a week at Kiara's soccer games.  She's gotten very good this year, and seems to be having more fun! 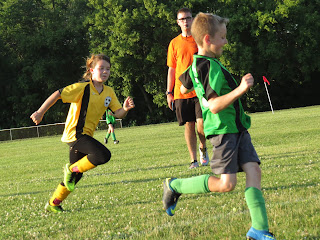 And, of course, I spend as much time as I can with this guy.  He decided he needed to try on a couple of Oma's hats.  I think big sis has been teaching him to pose.  And he has learned how much fun it is to make funny faces. 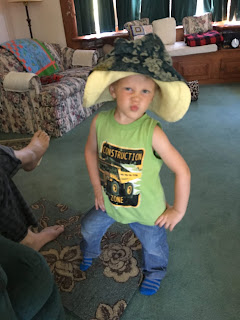 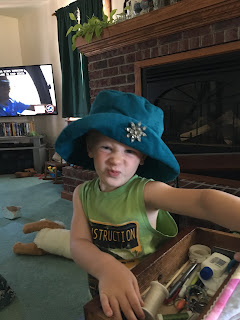 I have managed a bit of sewing time here and there.  I am very pleased to announce I have finished the last of the "kits of the month" from the snap quilt series I bought.  I'm keeping the seasonal ones for now.  This one might be my favorite. 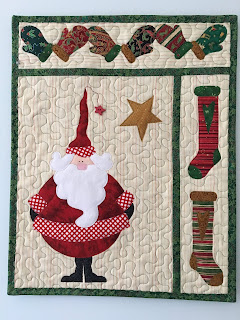 I just read an article from Ecowatch, about the deficit we as a civilization have been growing since the 70s.  We are using up the resources on the planet faster than they can be regenerated, and the US is the worst offender!  We build cities in the desert and then try to grow grass there.  Even in my part of the country, we try to grow non-native grass and plants, then use massive amounts of water to keep them alive during the hot months.  I am sickened every time I see sprinklers on a lawn, especially in the hottest part of the day.  We run the water while we're washing our hands, brushing our teeth, or just to let it get cold enough to drink. The water I waste waiting for the hot water to get to my shower could sustain several people in places without clean drinking water!  Just something to think about next time you turn on the tap.

I am grateful for:
Rain!
Time with the kids.
Kittens in my nursery!
Laughter at work.
Audio books
Posted by Martha Lorshbaugh at 9:37 AM