Time for a rant 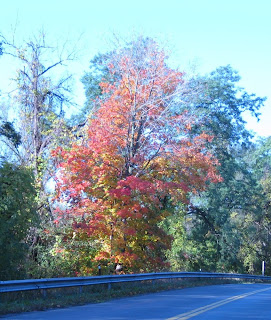 I went to a meeting yesterday, where there were somewhere between 50- 75 people. Refreshments were served. The usual stuff, coffee, tea and of course bottled water. I always bring a mug to this type of meeting, since I drink tea, but will NOT use a disposable cup. ( I don't have a dishwasher, but am still willing to do an extra dish when I get home) I was the only one there who thought to bring my own! How hard is it to carry a coffee cup in a quilted bag???

There were cases and cases of bottled water consumed, as was evident by the number in the TRASH at the end of the meeting. Again, I ask- how hard is it to carry ONE empty water bottle home to place in your recycle bin??? My other question is to the organizers of the luncheon. New York now has a 5 cent deposit on water bottles. Did these people not want to collect that deposit? All they had to do was place a box near the trash can for the bottles!!!!
It's a simple concept. Reduce, Reuse, Recycle!!! The "throw it away" mindset in this country has GOT to be replaced with the most basic principles of thinking of the future of this world!!!! Carrying a coffee cup, or one water bottle home is a very easy first step. Please think about it next time you're out.

There are definitely signs of Autumn's imminent arrival here in western NY. My favorite early harbinger is the bright red of the Sugar Maples. The one at the top of this post is on a curve on my way to work- right where you can't miss it! 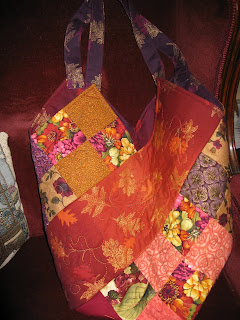 I have had very little sewing time this week, but it was just enough to finish up a couple of projects.

I made another patchwork Tote- using Scrap Therapy squares and coordinating fabrics- as a gift for a friend. ( I hope she gets it before she reads this. :-)
I'm still working on the pattern so I don't have to bind the points. I'm thinking this may be my last attempt. I just don't like the points at all- no matter what I do. 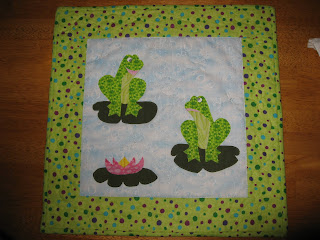 I also finished this little wall quilt. It was adapted from a pattern by MH designs. A former girlfriend of my son's saw mine made from the pattern and wanted one for her daughter. No way was I going to be able to do it in the time allotted, so I adapted it for machine applique. Then, just as I was getting close to finishing, they broke up. I suppose I could still have given it to her, but... well, you know. So it sat in the pile of UFO's until last weekend, when it took me all of three hours to finish! I am donating it to the Guild's quilt show silent auction.


Linda mentioned how confusing the sock sounds from last week. I'll take pictures as I make the second one and hopefully that will explain the process better. Stay tuned. Maybe that will be my Sunday project during football. (Oh, wait! I have a quilt to finish for the show!!!)

I am grateful for:
The rain held off until today, not yesterday when I drove over 300 miles.
Guy got a job!! (which was also Luke's good news last week)
I got to see the "Eureka" finale after all!
Fall colors.
Soup weather.
Posted by Martha Lorshbaugh at 11:19 AM