I was in the studio in dribs and dabs last weekend, so I didn't have the inclination to start anything big.  On the cutting table sat the bag with the leftover bits from the Atrcgirlz meeting.  (If you have a flat surface in your space, you know how things collect there until you have no choice but to clean.)  So I decided to play with them.  I had already applied the fusible to the other half of the fabric, so I cut it into squares and combined them with the ones I had leftover from the meeting.  As I divided them by color, some ideas formed in my head. 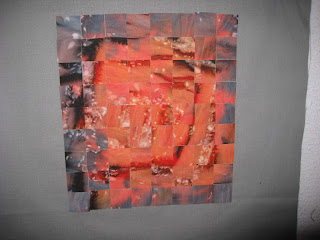 I took all the sort of directional pieces and laid them out on a grey background.  At first I was picturing looking out of a tunnel, but I think it looks like one of those pictures from the space telescope!  I'm seeing spiral stitching, some beads and maybe glitter on this one. 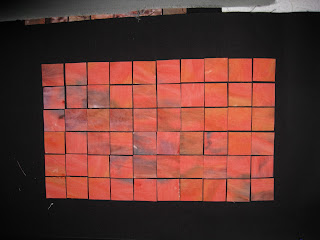 The next pile of squares were mostly all orange with some cloudy bits.  So I made clouds!  Not quite sure where I'll go with this one yet, but I am remembering a drive past the Montezuma Wildlife Refuge at sunset a year or so ago..... 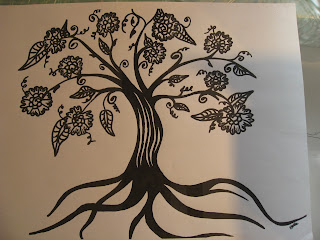 I knew pretty much what I wanted to do with the first one as soon as it was done.  My son drew this picture a while back that reminded me of a tree I had seen in Ithaca.   Isn't it fabulous?? He has a great talent! 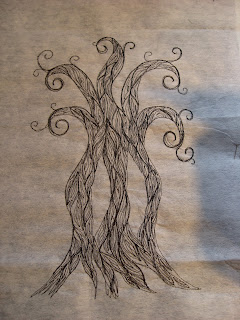 I thread sketched the tree after adding some stabilizer.  Here's how it looked on the back while the stabilizer was still attached.
( I have GOT to start making the fronts look as nice!) 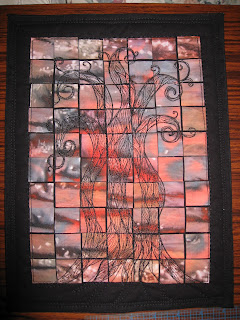 I also discovered I have quite a pile of quilts needing homes.  Many are small pieces.  Things I do for the fun of it, like these mosaics.  What to do with them?  A friend suggested "etsy", but I looked into that and it sounds like a full time job, with no guarantee of actually making any money.

So, what to do?  Sell them door to door?


I am grateful for:
Time to Play!
Waffles with Lucas
The things I take for granted every day
Laughter
a Homecoming
Posted by Martha Lorshbaugh at 2:15 PM