First, my Seriously? "rant" for the week...
Apparently the brain trust at Ideal Chevrolet in Avon thought sending out anonymous letters to potential customers was a good idea. It was a plain looking letter with no return address and somewhat cryptic contents, until you read the "newspaper" (printed just for this purpose)   Seriously?  Who thought this was a good idea in this day and age???  I am not one to take things like this in stride, so I have called the dealer (and been treated rudely), the newspaper (The woman there said "Creepy!" after I described it.  My thoughts exactly!), the postal inspectors office, and sent a complaint to the BBB.  I also went to the Chevrolet website and posted a complaint.  I like to think one person CAN make a difference ( and haven't we in the 26th district seen the proof?).

I bought a "Double Diamond Ruler" at a quilting event in Chautauqua last September.  I admit it, I'm a gadget girl!!!  As soon as I got it, Kathi - who was with me- was asking if I'd do a demo at guild this spring.  I got home and made a couple of the strips just to try it out.  One I made into a little bag.  The other is still waiting for the right project. 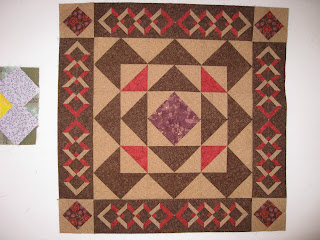 In preparation for the demo, I have been trying to find other ways to use it.  I found an orphan block in my UFO bin last week and decided it would be perfect for experimenting.  I am SO pleased with the result!  I don't know how I'll quilt it yet.
I've either ruined my demo (in April), or whipped up some excitement for it by showing it early.


I am grateful for:
Les Nessman
A day that feels like Spring
The way people look at my socks while trying not to stare.
Reunions with "old friends"
I've lost 4 lbs since the holidays!
Posted by Martha Lorshbaugh at 2:52 PM