Well, we had our quilt show, and it was by all accounts a success.  But we are all glad we have two years before we do it again.  Here are a few of the pieces I especially loved.  You can see more by following the link on the Guild's blog post about the show.


These pictures are of a quilt made from the class we had with Anita Grossman Soloman last October.  When we hung it we weren't sure which was the front since both sides were so  beautiful!


Two of the pieces I shared in my last post won awards at the show, which was nice. ( I reposted the pictures rather than make you go back to look)
I always say I don't care about the awards.  But I admit it- I'm always happy to receive one!


I was equally happy for my friend Kathi, who won five and my friend Elaine who won three.

Best of all- Elaine won for a piece she had really struggled with.  How's that for a perfect reward for all her hard work and perseverance?!?

The day after the show was spent doing a lot of the things I had ignored all week, but yesterday was one of those rare autumn days you have to go outside since you don't want to waste it! 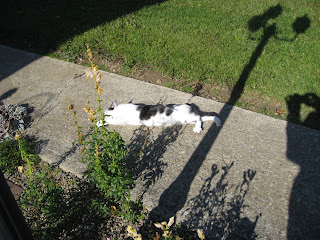 I took George out with me while I picked up the chairs from the porch and covered my delicate plants.  She has only been out once before and didn't venture very far.  I think she's going to decide she really likes it outside, though.

My green tip this week is perfect for this time of year.  Make sure you aren't paying to heat the outdoors by sealing up those tiny cracks!  Take a close look at places where two different building materials meet, such as corners, around chimneys, where pipes or wires exit and along the foundation.


I am grateful for:
Improved kittens ( don't ask)
The camaraderie at the quilt show!
Rare sunny October days.
The smell of fresh baked goodies.
I don't have to go back to the dentist now until February!
Posted by Martha Lorshbaugh at 7:15 PM