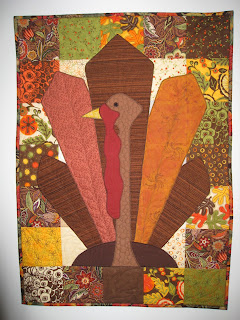 I can't believe tomorrow is November 1st already!  October just got here, didn't it?
I have one more of these calendar quilts to do.  I will be so happy to have this project ( for I have thought of it as one long project) finished at last!!  The November one almost didn't make it.  The fabrics I chose for the turkey all looked fine laid out on the table, but the one tail feather didn't look right after I got it all fused. It still doesn't make me happy. I stamped it, I rubbed ink on it, I colored it with watercolor crayons- which only served to highlight the seam in the background.  But I decided I could live with it.  So I finished it.  I practiced feathers in the tail.  Turns out my fussy machine loves invisible thread.  That's all well and good if all you want is texture.  But I'm the kind of person who figures if I'm doing all this great quilting, it should show up! That's why I like the heavier threads.  (sigh) 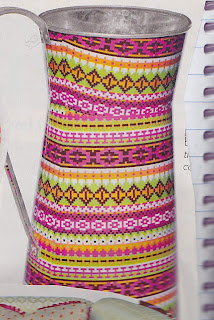 Somewhere in July, I think, I hinted at a project I was working on that was in need of a lot of work.  It is finally ready to be revealed.
The "ArtCGirlz"- the small art group we formed a few years back- decided to do a round robin at the beginning of this year.  We were to bring in anything we wanted for the others to play with.  I had recently decided this old whole cloth piece needed a new life.  I made it back in the early 90's as a way to improve my hand quilting.  It was a lovely pearl grey then.  But hanging on walls, then laying on table tops faded it to an odd pinkish color I really hated.  So I had already started playing with it when the round robin came up.  I found this picture in a magazine and decided to use this as my inspiration ( minus the yellow)
Sadly no pictures of this piece exist before it was altered.

My only rule was that the existing quilting should remain the major design element. 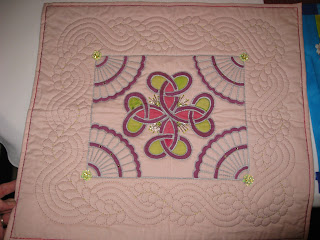 So this is what it looked like when I got it back after the 5 other members of my group had their turn with it.  In the little journal that went around with it, they all said the same thing- how they thought it was so pretty and they didn't think it "needed" much done to it.  Clearly they didn't get how much I disliked it the way it was.
So, Mary Ellen painted in the corners for me,  Susan added the line of stitching just inside the binding, Elaine added some beads in the feathers, Chris gave it some sparkle with crystals and Lori beaded small fans in the center.  Well, that was a nice start...... 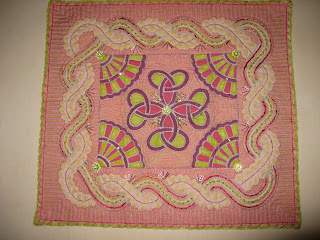 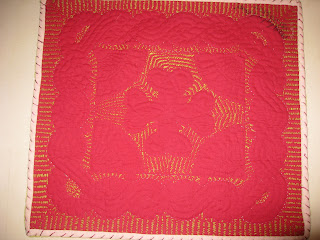 But I didn't want that grey at all!!  So here is the finished piece.  I colored the fans in some more, decided the green was weak and added more green- paintstiks I think- using the same paint on the loops in the feathers just to give them some color.  Elain'e beads didn't show much, so I colored behind them, then decided the rest of the "rope" quilting needed something.  First I colored it with a watercolor pencil.  That didn't do much.  So I couched a cool thread with bead and then couched another one with sparkle thread.   Using Lori's fans as my model, I added more beads around the edges. I had thought to add seed stitching all over it as a background, but the green didn't do much on the grey, so I found a wonderful sparkle netting and stitched that over the whole thing, cutting away selected parts.  I decided to try the "kantha" style of stitching Kathi uses so successfully in her work.  (and doesn't that look SO cool on the back?)  To cover the binding, I couched a chenille yarn with some rayon floss.
For a few minutes after I cut away the netting, I thought the grey still showing in the feathers would have to go.  But I  like how it looks kind of lacey! 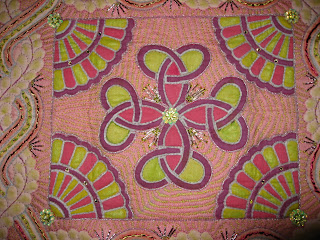 I tried new things on this piece, always thinking I had nothing to lose because I didn't like it.  So it was kind of a "process" piece for me.  And I love the results!  Much better!

I named it "Masquerade!".  That seemed perfect because not only does it have all the sparkle and color one might see at a costume party, but now it's a plain Jane quilt all dressed up for a party. 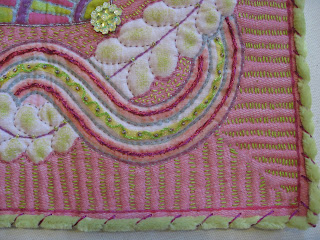 The lovely sparkle buttons came from India, I think.  I bought them from Priscilla Kibbee several years ago.

It's not all that easy coming up with a "Green Tip" every week.  I keep coming around to the same old things, which all seem like common sense to me.  Sadly, I often feel like the only one.  I go shopping and I see the stores throwing away the garment hangers that used to get used over and over.  Must be the manufacturers are sending the merchandise on hangers now?  Sad!  The price of those hangers- and the cost of disposing of them- goes into the price we pay, you know.  Not to mention the resources wasted in making the hangers.  The waste in the retail industry as a whole is sickening!  But until it becomes more important -for financial reasons alone since that is their only true concern- to them to save than to waste, they will continue
So all I can do is my best- and ask you to do it too!

I am grateful for:
The fact that the hurricane Sandy did only minor damage in our area. (and my heart goes out to those who were not spared!)
The Army maintains a facebook page for basic training so my husband and stepson can track Jake's progress. (and thanks to Kathi for telling me about it)
My kittens are getting healthier!
Apple Crisp
Flannel sheets
Posted by Martha Lorshbaugh at 4:09 PM