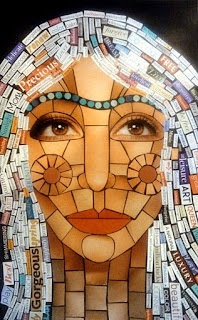 A while back, I saw this picture on facebook.  It is also on this blog post by the artist.  One of the girls thought it was a mask because of the eyes.

Anyway, I thought it looked like a fun project for the ArtCGirlz to try, even though it's paper.

So those of us at the October meeting brought in magazines and had a blast leafing through them to find the right colors, words, features.....

I had originally thought to do something totally abstract, but then I found the eyes.  So I guess it's semi-abstract.  It was SO much fun. 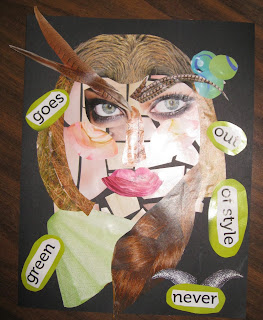 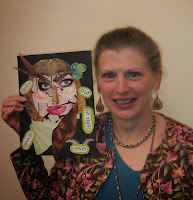 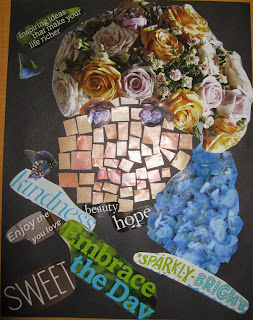 When we all showed them at the regular guild meeting, the girls who hadn't been able to come said they wanted to do it.  So at the November meeting, I did it again.  I really need to practice the mosaic thing.  I was trying to hint at a nose and mouth, but the hints were a bit too vague.  It was still fun!


Two new exhibits opened at the Roz Steiner Gallery last week.  Both are interesting! I am happy we have this space on campus- and a new gallery manager so the gallery is open when I'm here. ( I wish they would find a way to do evening and weekend hours, though)
This is the work of Lee Hoag.  The exhibit is called "the Alchemy of Objects".  He takes old stuff and creates sculptures.  I wanted to know what the bits were before, but none of the signs had that information. 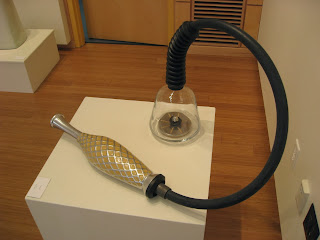 This piece reminds me of the hooka the caterpillar smokes in Alice In Wonderland! 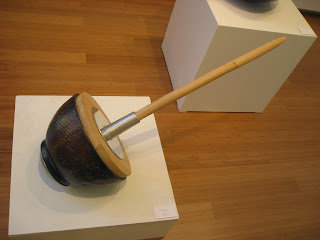 I wanted to play with this one.  It looks like a top you could spin! 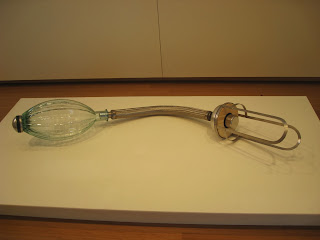 This one looks like a fabulous night light to me!  He uses a lot of those glass pieces.
I wonder where he gets them?

There was another, um, interesting piece.  But I decided it was a bit to "Masculine" to have a place here.*

The lobby gallery- open any hours the college is open- is featuring the work of Courtney Blazon.  The combination of windows and glass on the artwork makes it nearly impossible to get a good picture.  But she shares a lot of her work on her blog. 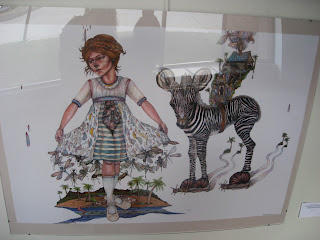 Check out the snails on the feet of the zebra!
Her work is kind of Alice in Wonderland meets Terry Gilliam.


*Think of the word "ladylike" in an episode of Everybody loves Raymond and you'll know what I mean.

I look forward to Thanksgiving more than most other holidays.  It breaks my heart that the commercialization of Christmas- fueled by the crass consumerism that drives our broken economy- has diminished this most wonderful of holidays!  As Loudon Wainwright observed, "Forget about Thanksgiving, it's just a buffet in between"

In your feasting, remember it saves money as well as resources to use your good china and cloth napkins rather than  disposables!  Besides, you have all those nice dishes, you might as well use them!

I am grateful for:
Having only 4 foster kittens!
Good sewing time
Good time with friends at/ after the guild meeting
A warm sunny afternoon of "Indian summer"
It wasn't raining when the fire alarms sent us out into the cold!


Posted by Martha Lorshbaugh at 12:50 PM