SO much easier to ask forgiveness than permission!!! 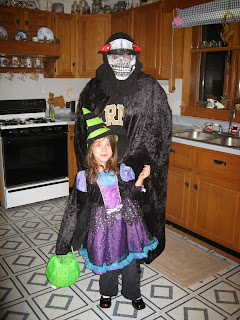 First- here is my only Trick-or-treater from last week.  Isn't she beautiful?!!  (mom prefers to hide behind a mask) 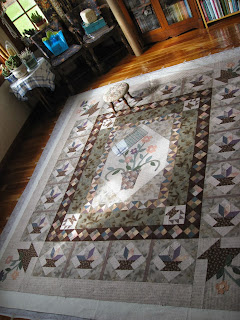 I spent most of my last (three day) weekend marking, layering and basting the raffle quilt, taped to my dining room floor.

I am really pleased with the way it has turned out.  But it sure would have been easier to have a pattern to follow.  Most of the quilting will be in the ditch style, but there are parts that needed to be marked.  Another member recommended "Kopha" water erasable markers. She said they seem to work much longer than the clover ones. (meaning they don't dry out as quickly) The line seems finer as well.  I got mine at the Stencil Company. 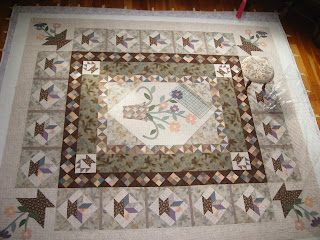 I'm not sure which of these pictures has the truer color, so I posted both.  The footstool is what I rested on as I was working.  I hoped it would save my knees.  It didn't.

So- the reason for the title of this post- you may remember my "Where the Wild Things Are" quilt.   I made it for the challenge and for my son, Lucas.  I never intended it to be a competition piece or anything.  But I did hope to enter it into a few shows once I got it finished because I was so pleased with how it came out.  The first show I would have entered was the Genesee Valley show LAST June.  I sent my request to Harper Collins in January, as soon as the quilt was finished.  Their website states the usual turn around time is 4 - 8 weeks.  But by April I had still not heard anything from them.  So I resubmitted my request, including the fact that my deadline was fast approaching and would someone at least let me know the request was in process.  A nice lady called me to discuss the request, how the quilt would be used, etc, etc.  I told her I needed a decision by May 1- the date to withdraw the quilt from the show.  Apparently they have a separate person to deal with requests for Maurice Sendak's work.  And- since Mr Sendak had passed away, all requests now go to the Sendak family.  I never heard another word.  The deadline passed and I didn't have another show looming, so I kind of let it drop.  But then I thought about it again a month or so ago and was pretty upset they never responded at all.  So I submitted my request a third time, asking what ever became of my original request and saying I thought it was pretty poor practice to not send me any response at all.  Turns out, once the May 1 deadline passed, they discarded it.  Apparently I would have to submit a request for EACH time I wanted to show the quilt, including dates, location, any media coverage it might get....
Seriously???? For EACH show??? Are you freaking kidding me????  I cannot imagine that level of pettiness!  I have since asked- since I assume this is all about someone fearing I will make money and they won't get their cut-  if there is a license I can buy which would allow me to show the quilt on the condition show entry does not give the sponsor permission to use images of the piece in any way- which means almost nowhere other then my own guild, and possibly my son's bedroom.  I have had no response.
So there is a LOT of truth to the saying that it is easier to ask forgiveness than permission.

I have a problem with copyright laws in all honesty.  I don't know how some ideas and designs- even words!- can be copyrighted.  I don't get how if I buy a quilt book or pattern I can't use it any way I like, or share it with a friend.  I do, however know why they are needed.  I just read a story about an Australian quilt designer who sold her pattern to a publisher who then sold it to someone else.  Maybe she didn't read her contract closely enough, but I still think she should be paid again by the second magazine.

Jane Sassaman told a story when I saw her speak several years ago about entering a hotel and discovering her quilt was the carpeting!  (She successfully sued the carpet manufacturer!)
I think this is the quilt which was used without her permission.

My Environmental rant is short this week.  Just stay informed.  Know what is going on in your neighborhood.  If it's something you find objectionable, get the facts yourself.  Don't let "the experts" tell you.  Most of those "experts" have an agenda.  And make sure you aren't making it worse.  Several years ago, there was a proposal for a wind farm near me.  I was excited about it.  But the "NIMBY's"  were very loud and a moratorium on wind farms was passed.  Now the frackers are looking at the same area. HMMM- let's consider these options:  the whoosh, whoosh of a wind turbine, or poisoned air and water.  Not a tough choice.

I am grateful for:
an unexpected call asking my advice
fresh Cuba cheese curds
the kittens who cuddle on my lap and purr the minute I go into the "nursery"
being comfortable warm
being part of a good team

Posted by Martha Lorshbaugh at 11:12 AM