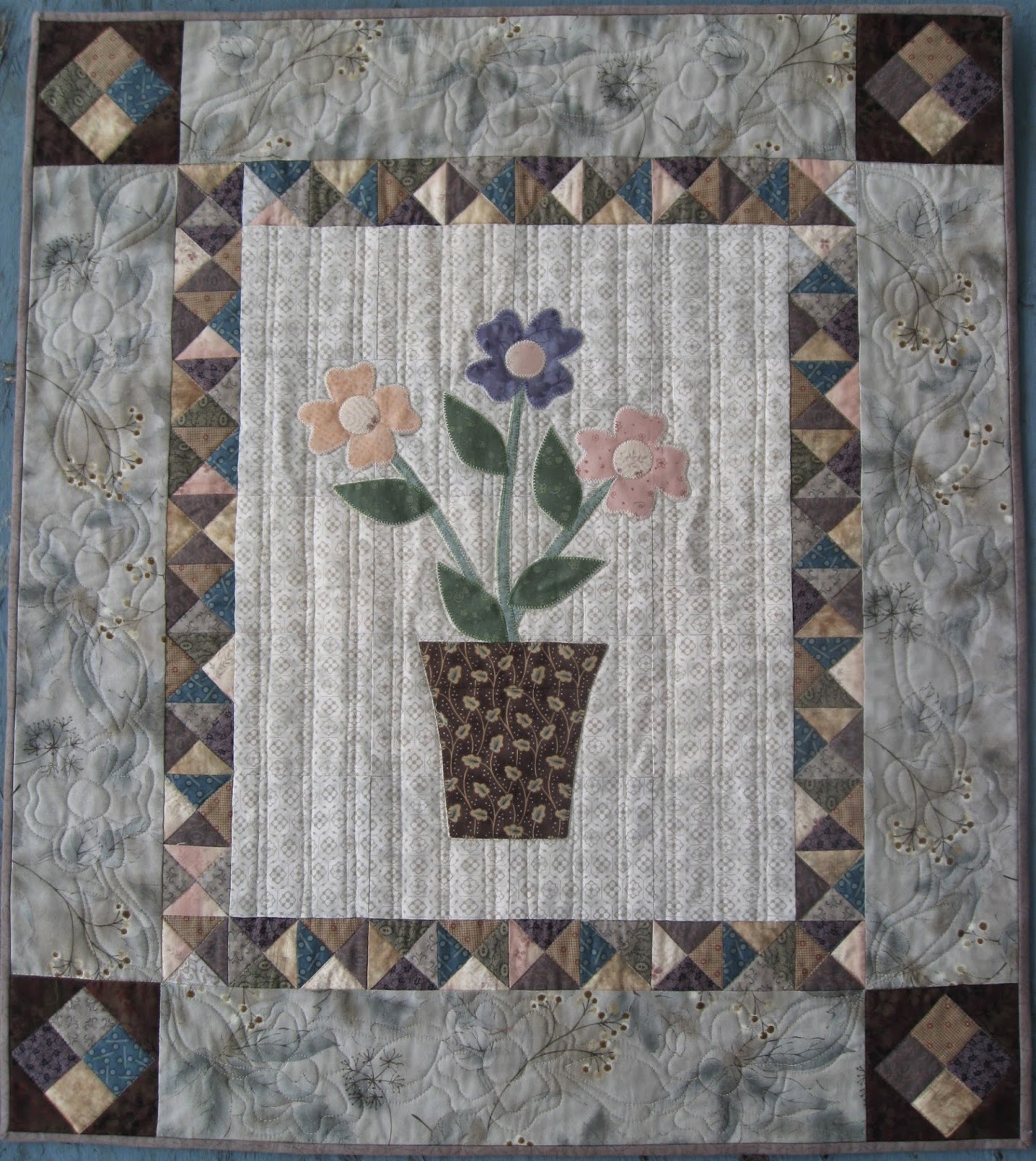 I actually finished this the last week of May, but keep forgetting to do a post on it.
This is a miniature version of the raffle quilt I designed for the Museum Quilt Guild- that one is still not quite finished.
I had some nice bits of the fabrics left over, so decided it would be a nice addition to the Silent Auction we have at our quilt shows.  The funds raised from this help support the veterans who live at the VA Medical Center where we usually meet.

I had to shrink down some of the pieces, but since the full sized one was sort of improvised, that wasn't hard.
Since I was doing this one on my own, I took some shortcuts.  The applique is fused and machine blanket stitched. 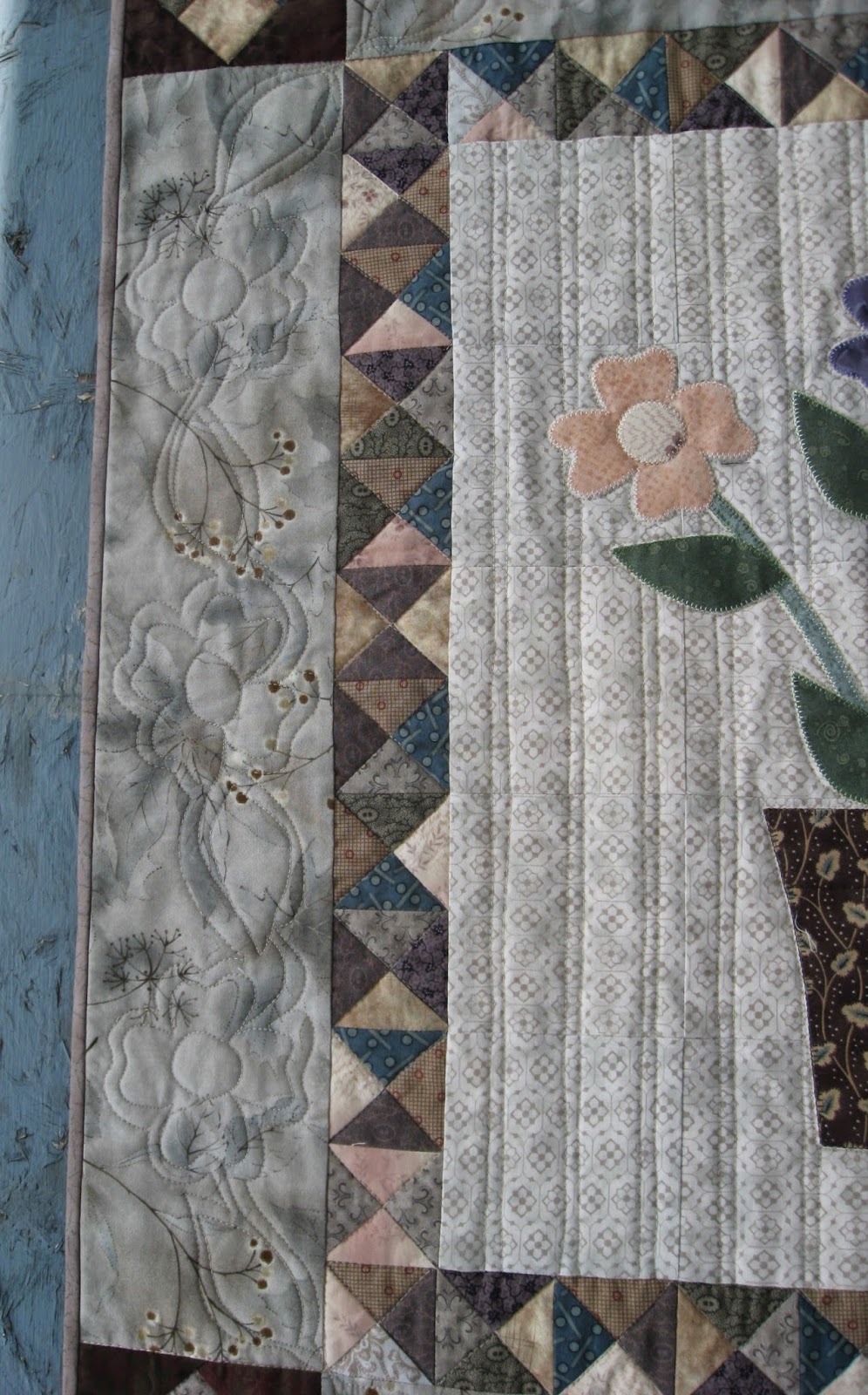 And the quilting was done by machine.
I tried to replicate the hand quilting on it, though.  Lots of stops and starts,

In the border, rather than the 1/4" lines behind the flowers, I echoed it.  I think it still looks pretty traditional. 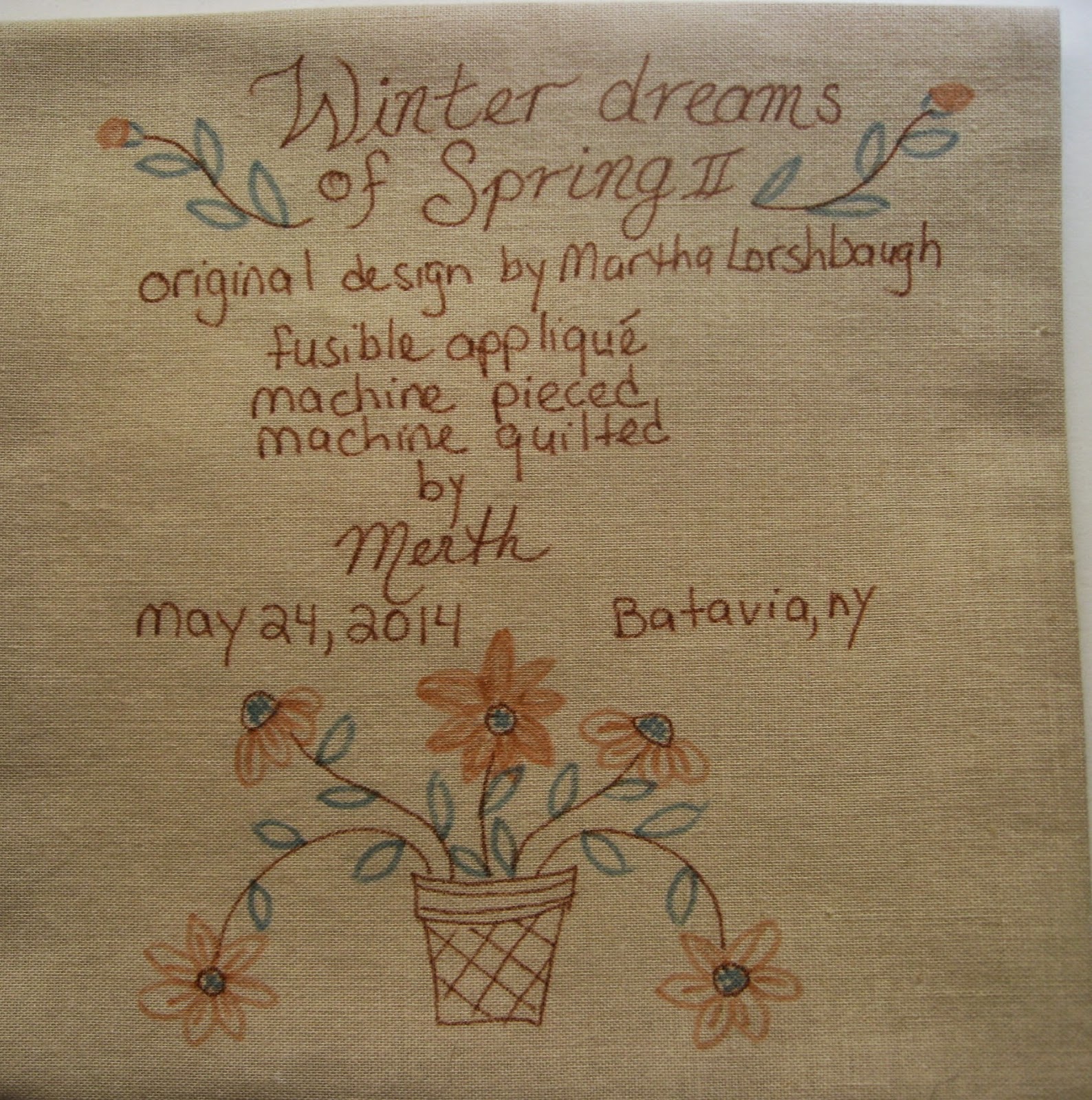 For the label, I was able to make a similar look to the taupes using sort of earthy colors of the markers I have.  I like it so well, I will probably do something similar for the full-sized quilt. 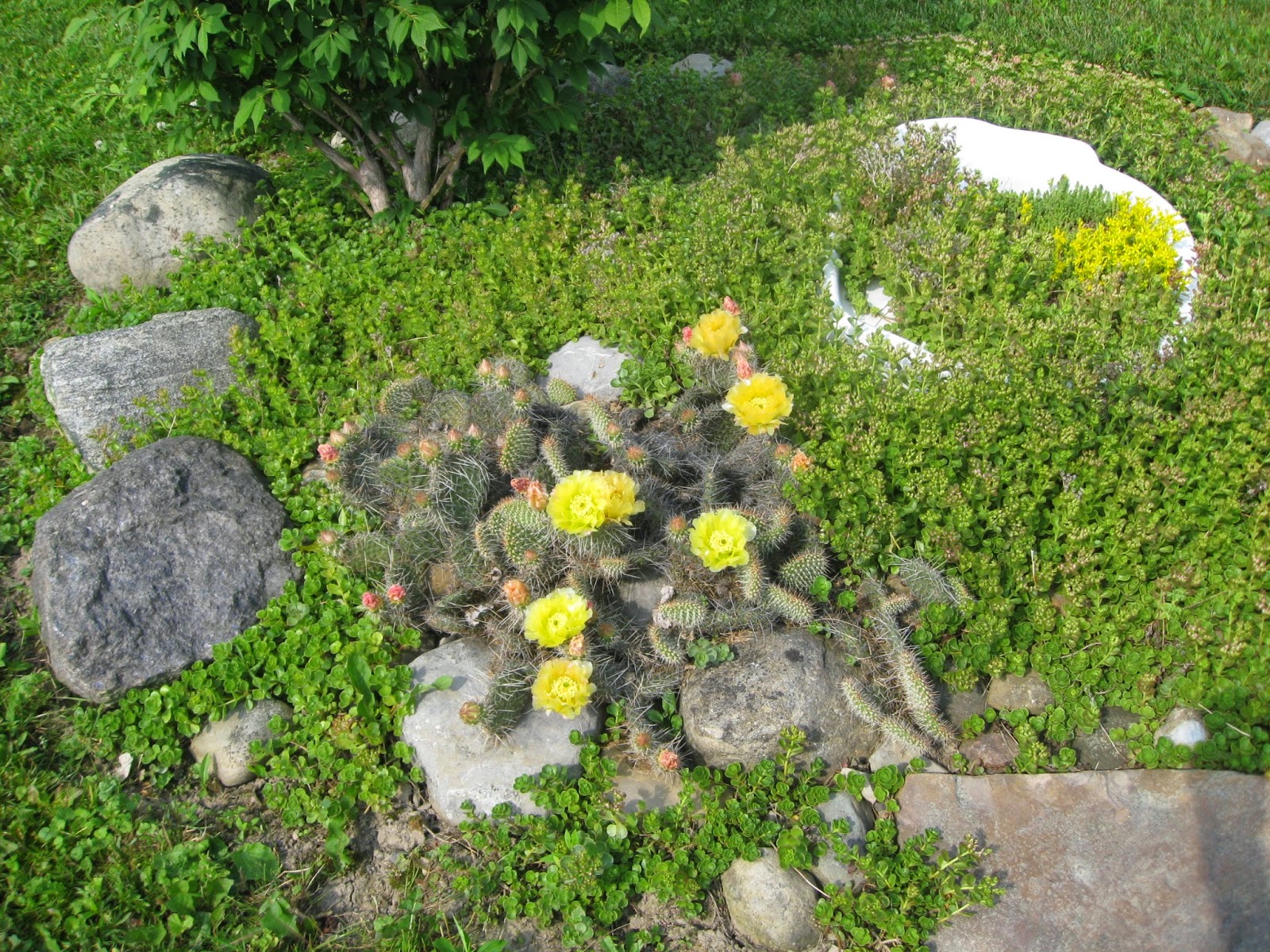 Meanwhile, I have spent most of my "free" time in the gardens.  Some spots aren't looking too bad.

Yup, that's a sink.  Something heavy fell in it and cracked the bowl.  So I put it in the rock garden.  There are lots more rocks under all that stone crop. 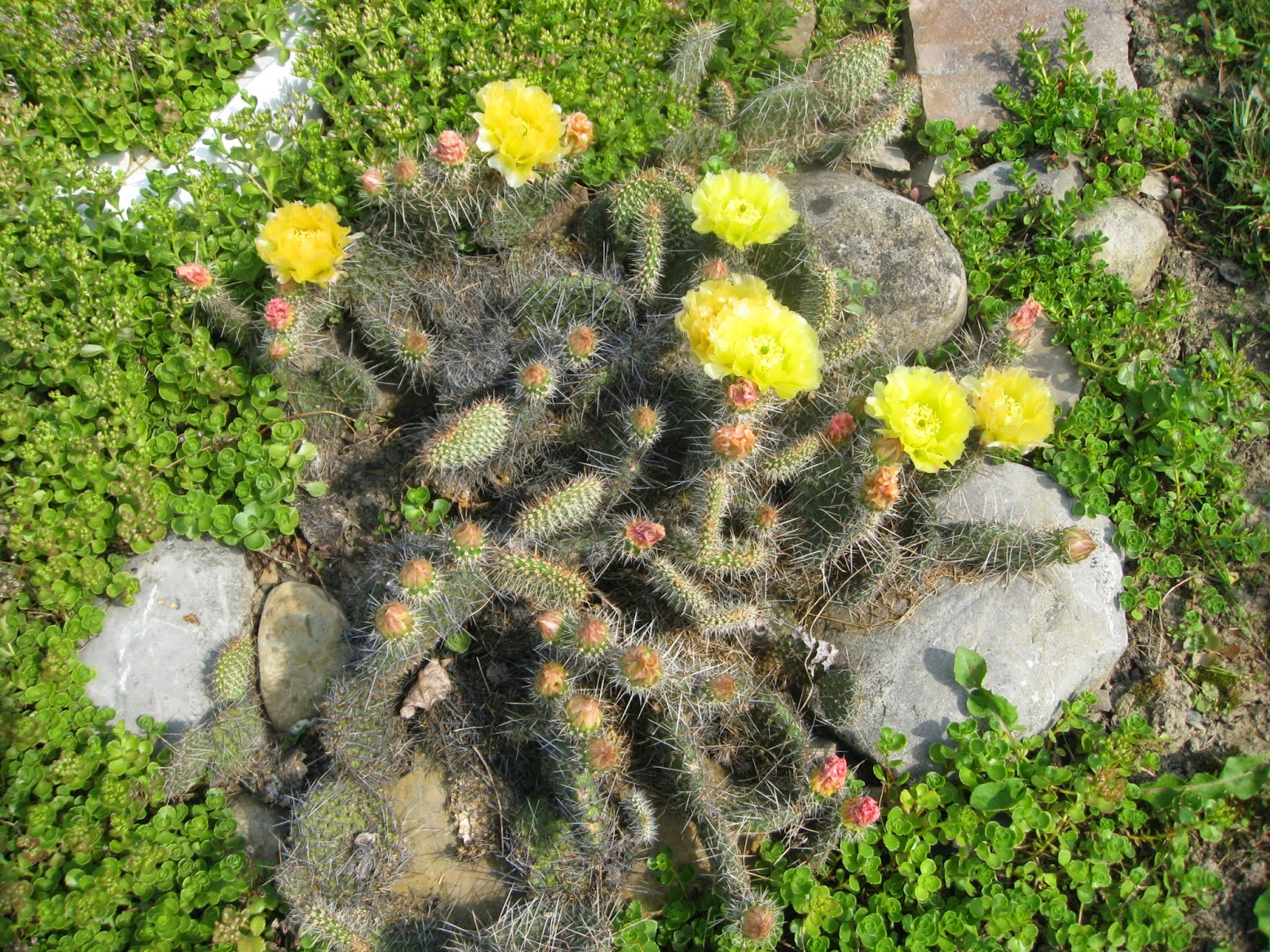 Al brought me the cactus from Wyoming one year when he went out there to hunt.  Since they have winters at least as bad as ours, I planted it.  Obviously, it didn't have any trouble adjusting.

The blossoms are one of the things I look most forward to in the garden this time of year. 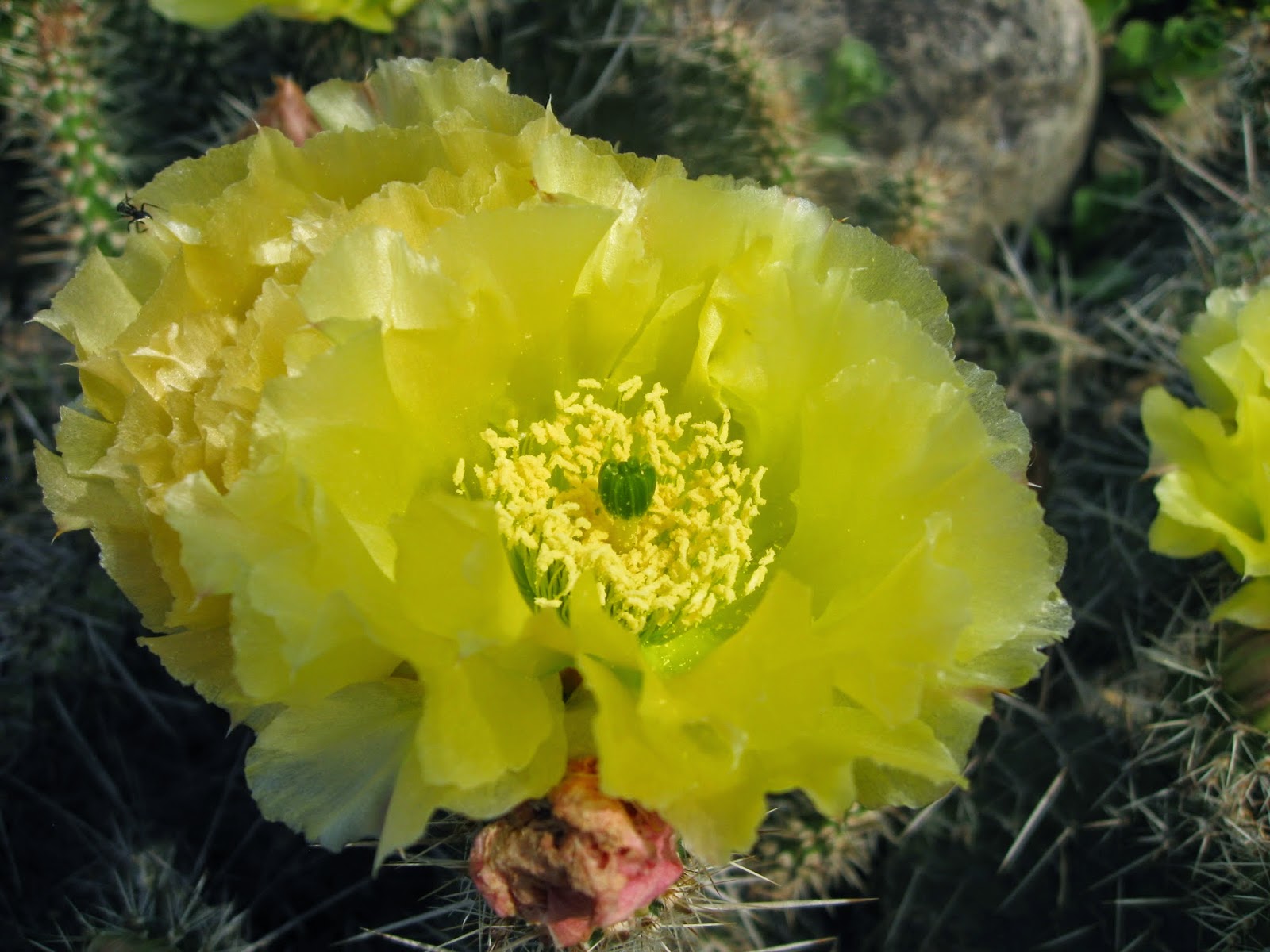 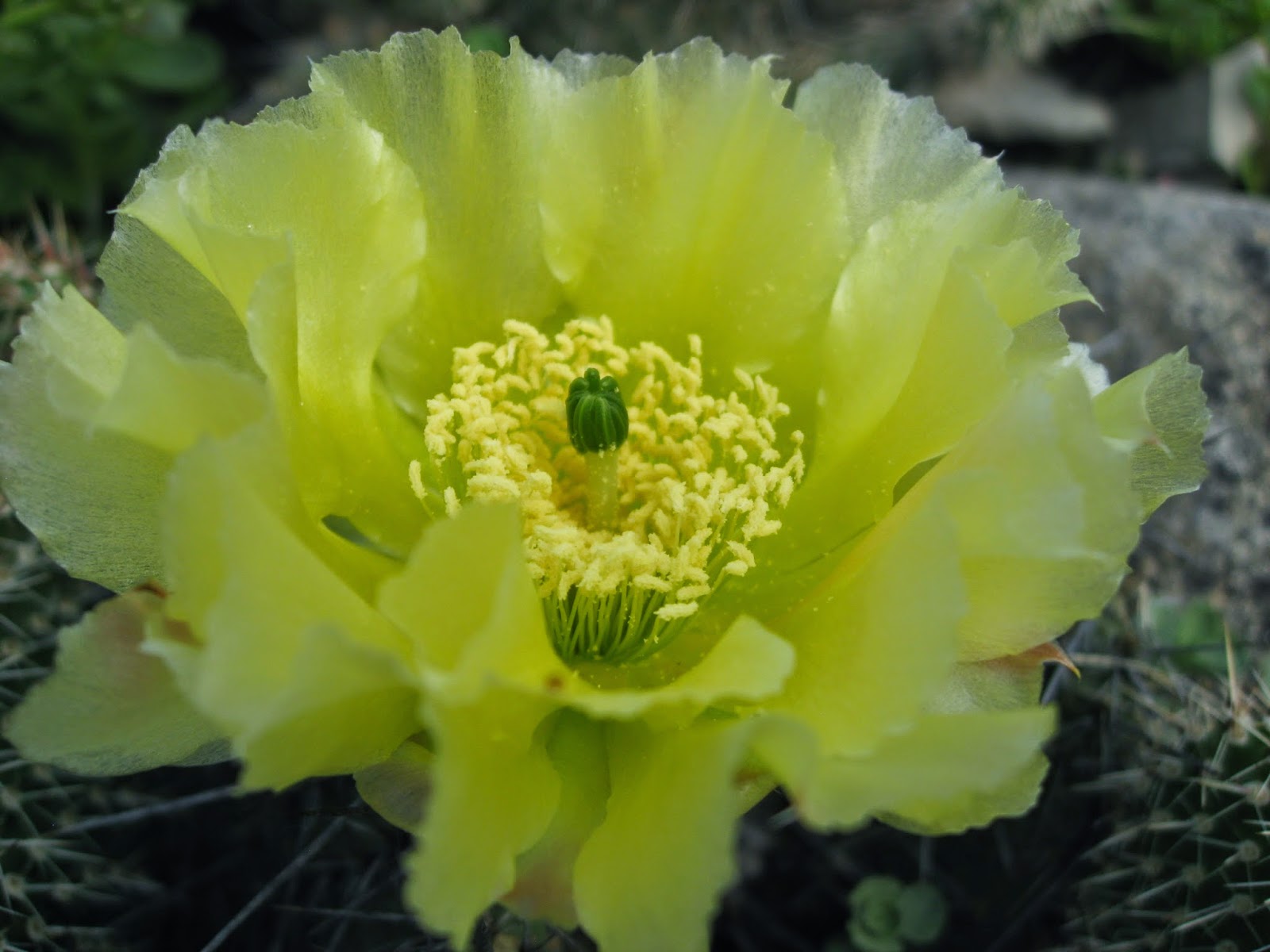 Trying to weed around the cactus- which has spikes nearly an inch long!- is NOT one of the things I look forward to!

I just missed a bee in this blossom- he was right down in all those yellow stamens (that just doesn't sound right),  joyfully collecting the pollen.  It was like he was swimming in there!

Speaking of bees...
Are you seeing those pesticide application signs on your neighbor's lawns?  Or are you using them yourself??
Did you know that some of the chemicals those companies use may be responsible for the collapse of honeybee colonies??  Maybe it never occurred to any of those people how important bees are.
Here is a wonderful visual article about how much of our food depends on bees!


Are a few rosebushes really worth it????

I am grateful for:
The kitten shower was a great success!
The air conditioner in the bedroom.
Rain when I was needing it.  (could have lived without the thunderstorm, though)
The quiet days at work in the summer.
Finding out what has happened to Claire and Jamie since last I "saw" them!
Posted by Martha Lorshbaugh at 12:10 PM