Maybe I was a geologist in a past life? 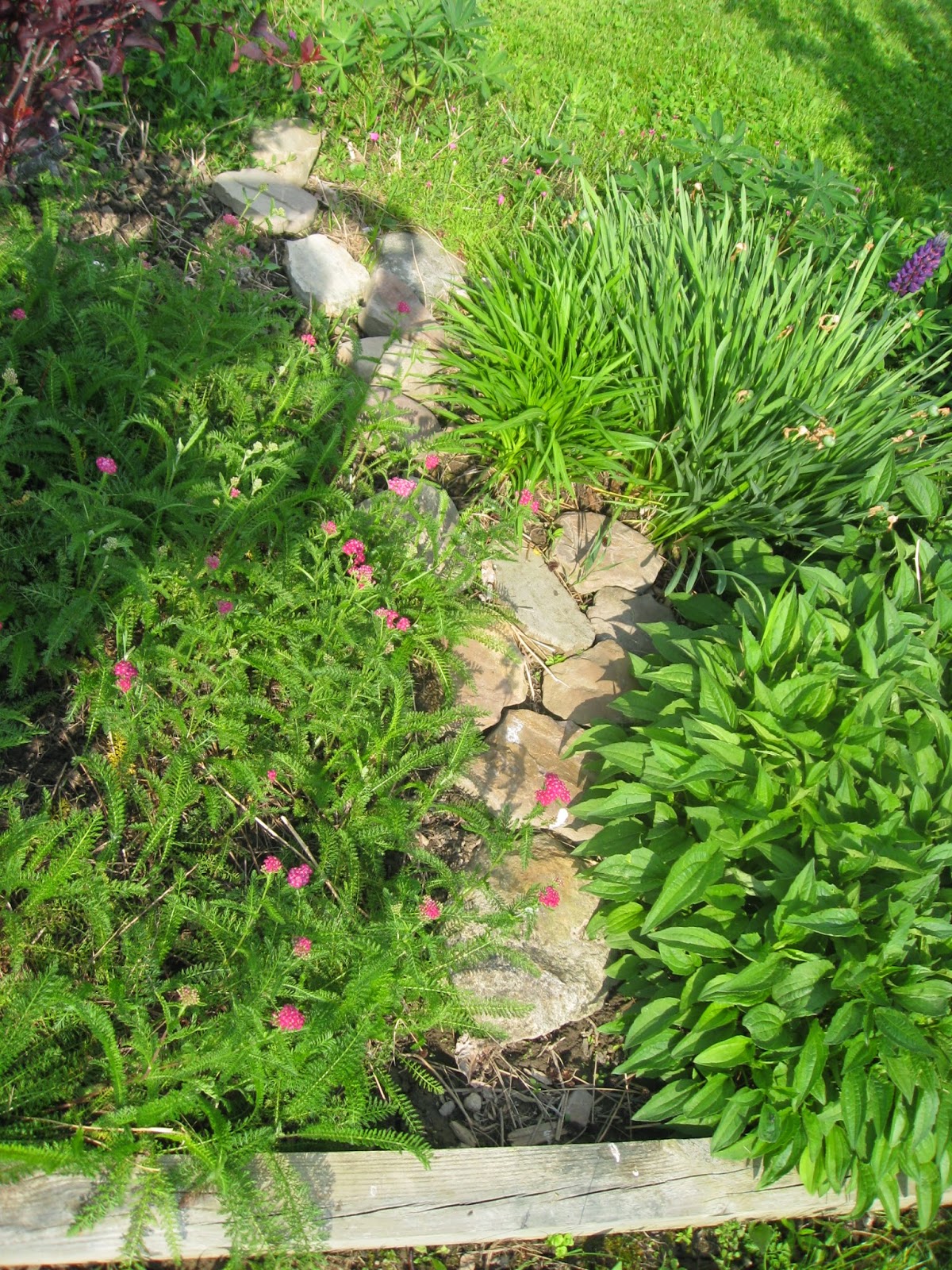 I love rocks.  Always have.  When I was a kid, I spent a large portion of my summers at my grandmother's house.  There was a creek running through it where we used to go play- wading and catching crawfish, swimming in the deep spots on hot days, or just walking along the creek bed.  (And get this!- we went unsupervised, no lifeguards on duty or anything.  We were taught responsibility back in the stone ages.)  I would always come back with a pocket full of rocks- or a single rock if it was bigger.  I wonder where they all went.  Maybe my grandmother's garden?

I still collect rocks.  Almost always bring one home when we go on vacation.  We brought some back from the Pacific Ocean on the plane (in my checked luggage of course) when we visited Guy! 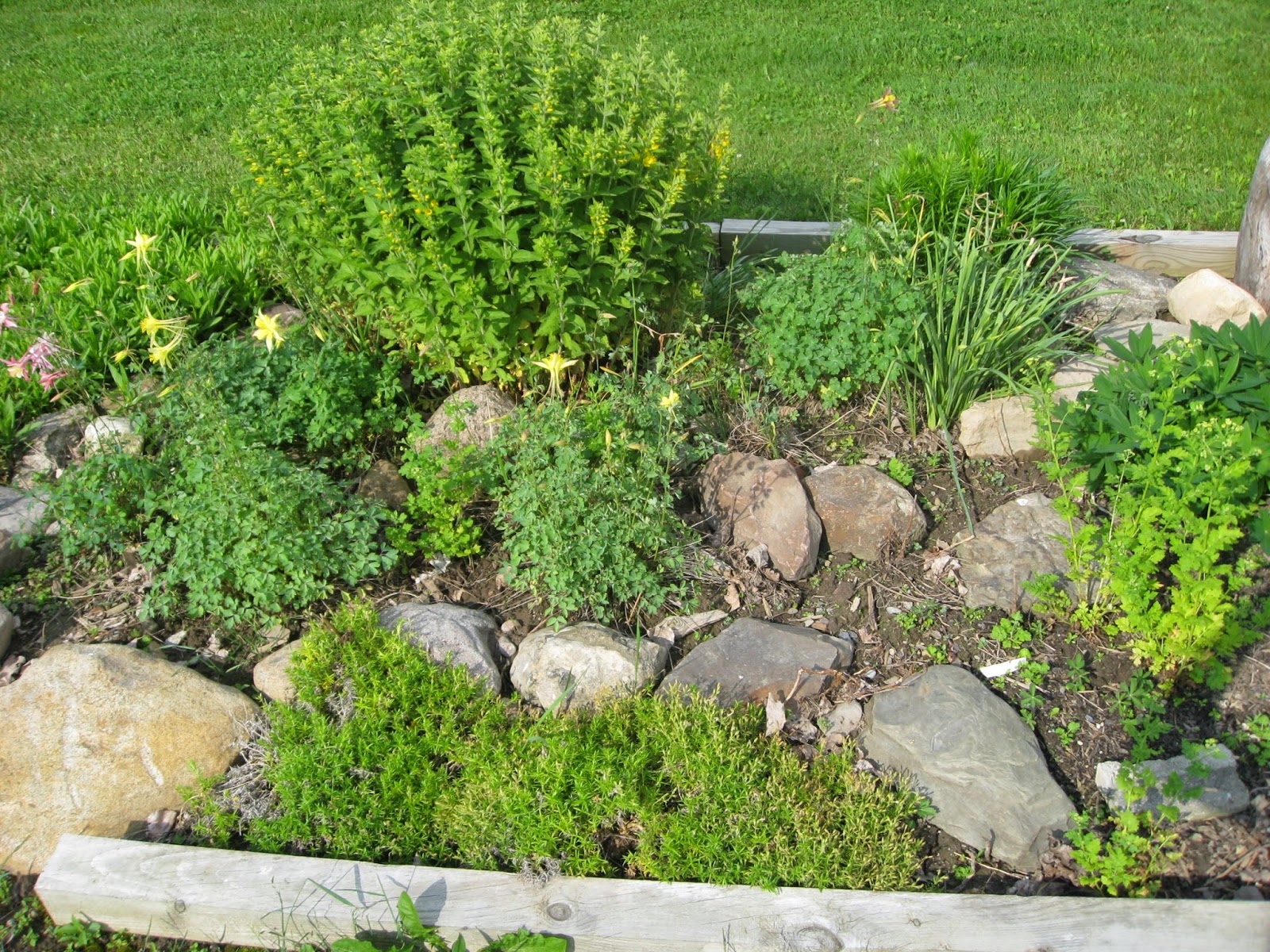 So when we bought our first house, I made a trip down to the creek and gathered some nice big rocks to use as a border around the flower bed.  When we moved, I brought them to the new house and replaced them with ordinary rocks from the field around the new house! 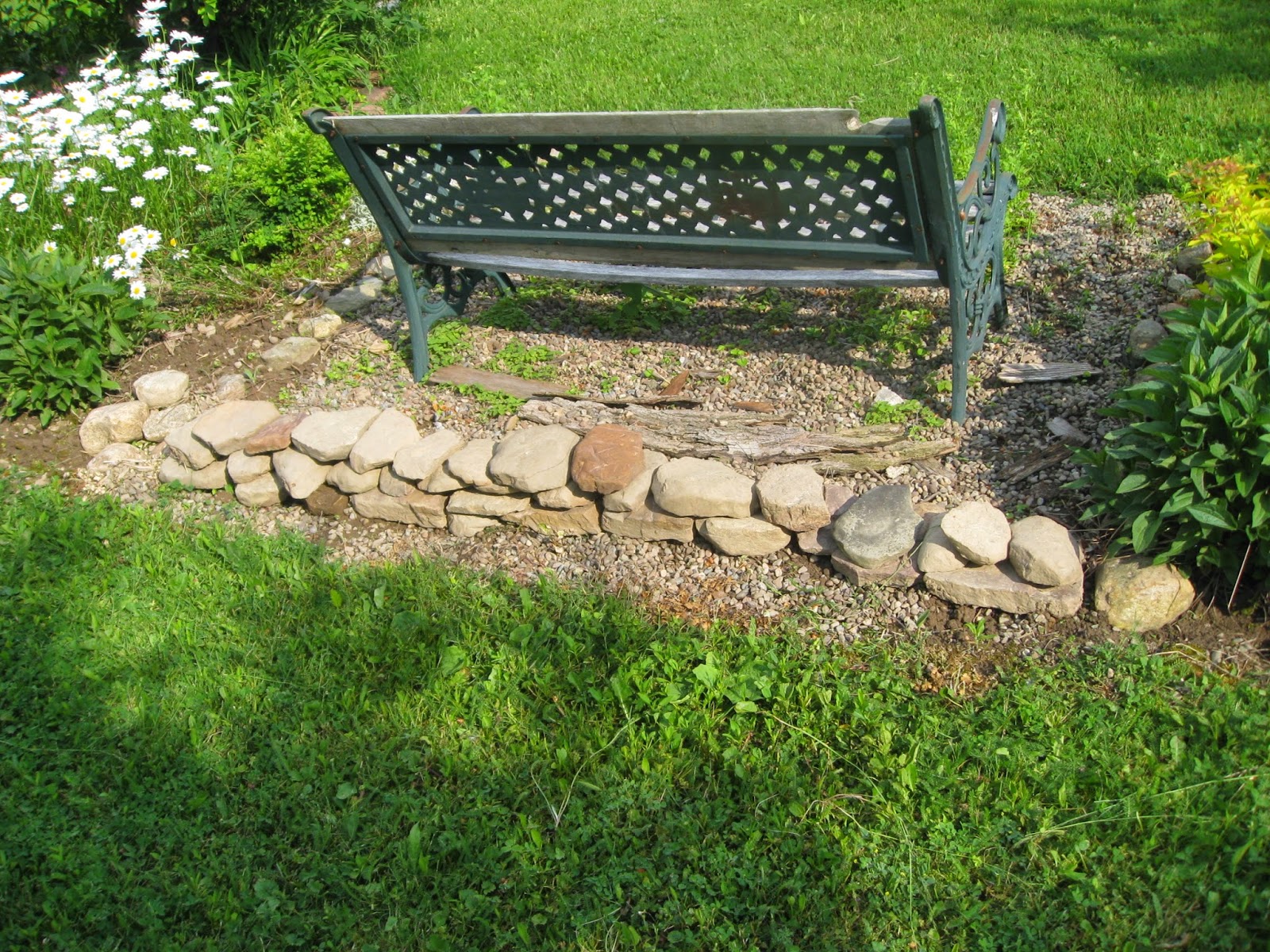 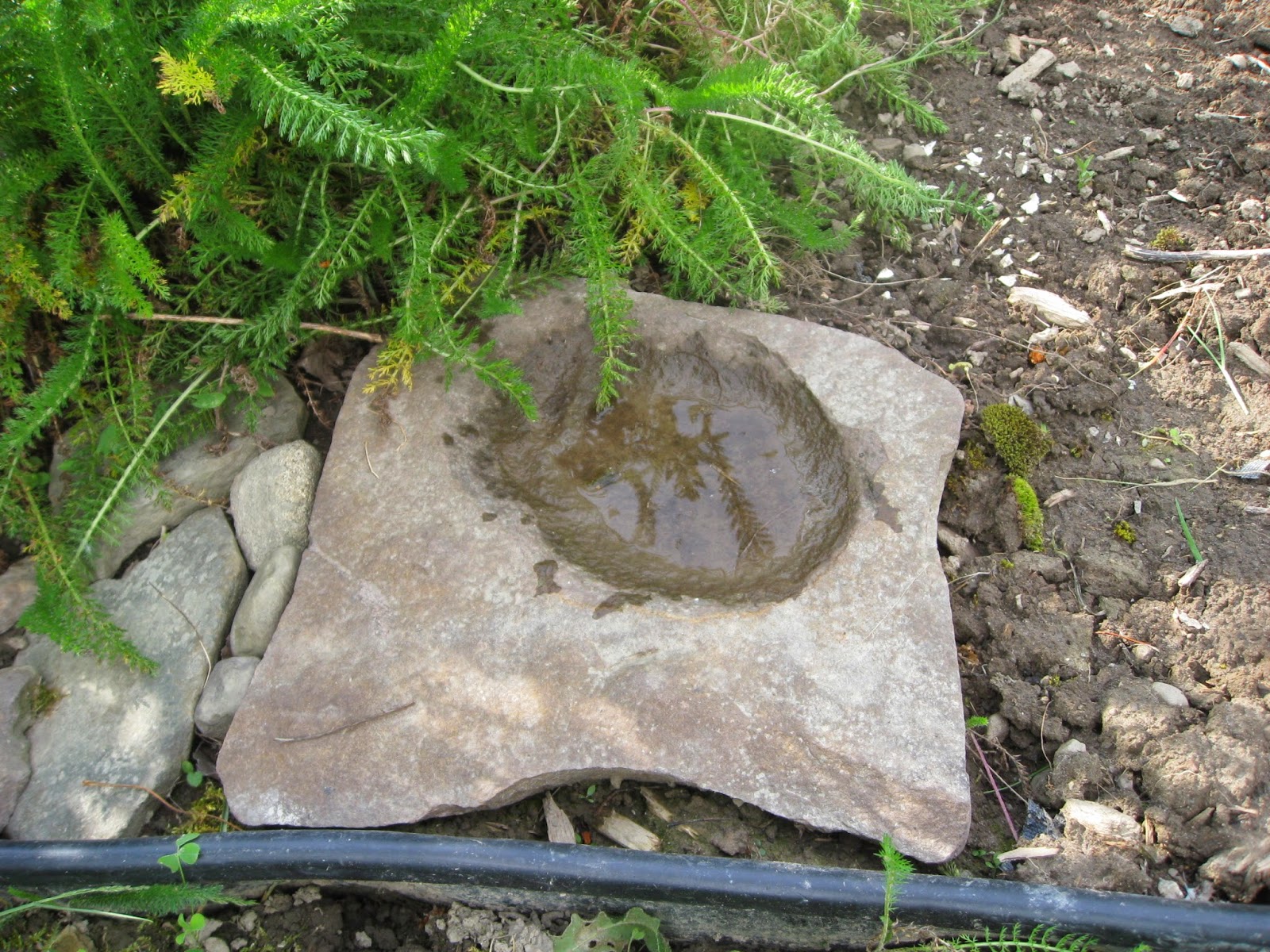 I use them everywhere in the garden- as borders, as walkways through the perennials.  They reduce the amount of open areas which need weeding- in theory.
I am even building a sort of stone fence! I doubt it will be very stable, but it's just for decoration anyway.


This is one of my very favorites- it has a little depression where the rainwater collects- a natural butterfly pit-stop!


So every spring before the farmer comes to plant, I go out in the field to gather rocks. They migrate up over the winter.  I take my weeding tool

out to pry them loose from the dirt and toss them into a bucket or my little garden cart. But one of the last days I was out there before Joe (the farmer)  came I was having trouble with one good looking rock, so I went up to get the trowel instead.  Hubby was passing by, and asked if I wanted some help.  I said sure.  So he followed me out to the field and I started poking around the rock and prying gently to see if I had loosened enough of the soil.  I even bent the trowel a bit at one point! That was when hubby said that must be a big rock.  I got excited over that!  So he went up to the shed and got a shovel.  Meanwhile, I was picking up more of the ones the right size for my fence, and I traded my little cart for the wheel barrow.
He dug and dug and just couldn't find the edge of this rock.  I think he was ready to give up, but by now I had to see this rock!  So he kept digging and finally revealed this! 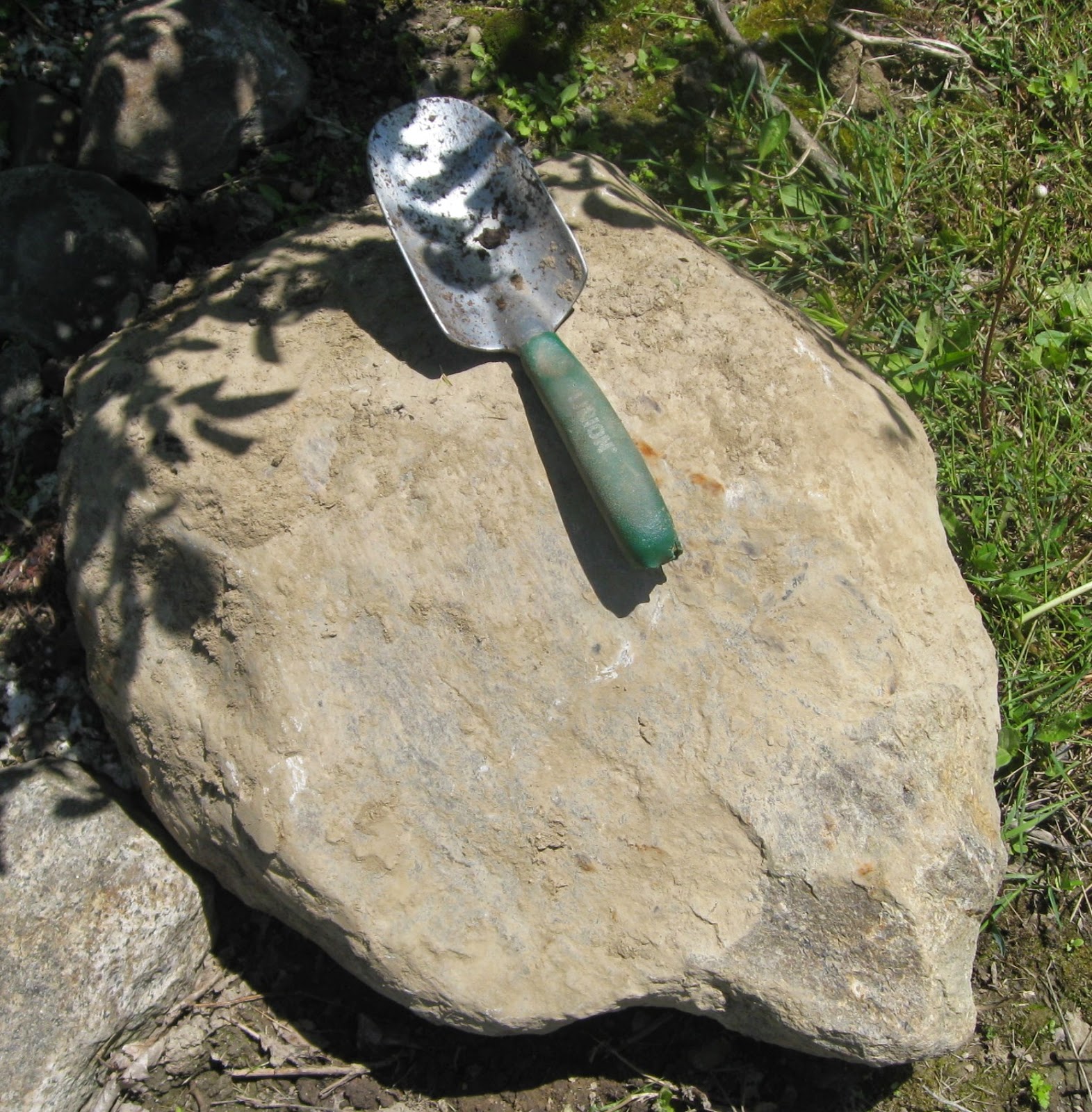 The clean part at the lower right of the picture is all that was showing.  (A friend called it an iceberg rock!)  It was pretty deep hole, and hubby said he'd never be able to lift it.  So I suggested he pry it up a bit with the shovel and I could push dirt under it to raise it up.  That worked pretty well.  To get it into the wheel barrow, we laid it on its side and rolled the rock into it.  Then we carefully stood the wheel barrow back up together.  It was a pretty long hike up to the garden from where the rock had been, so I ran ahead and cleared a spot  for it-  a prominent place at the front of the garden!  It rained the other day, so the whole thing is much less mud covered now.
(I bet it will be a while before hubby offers to help me again) 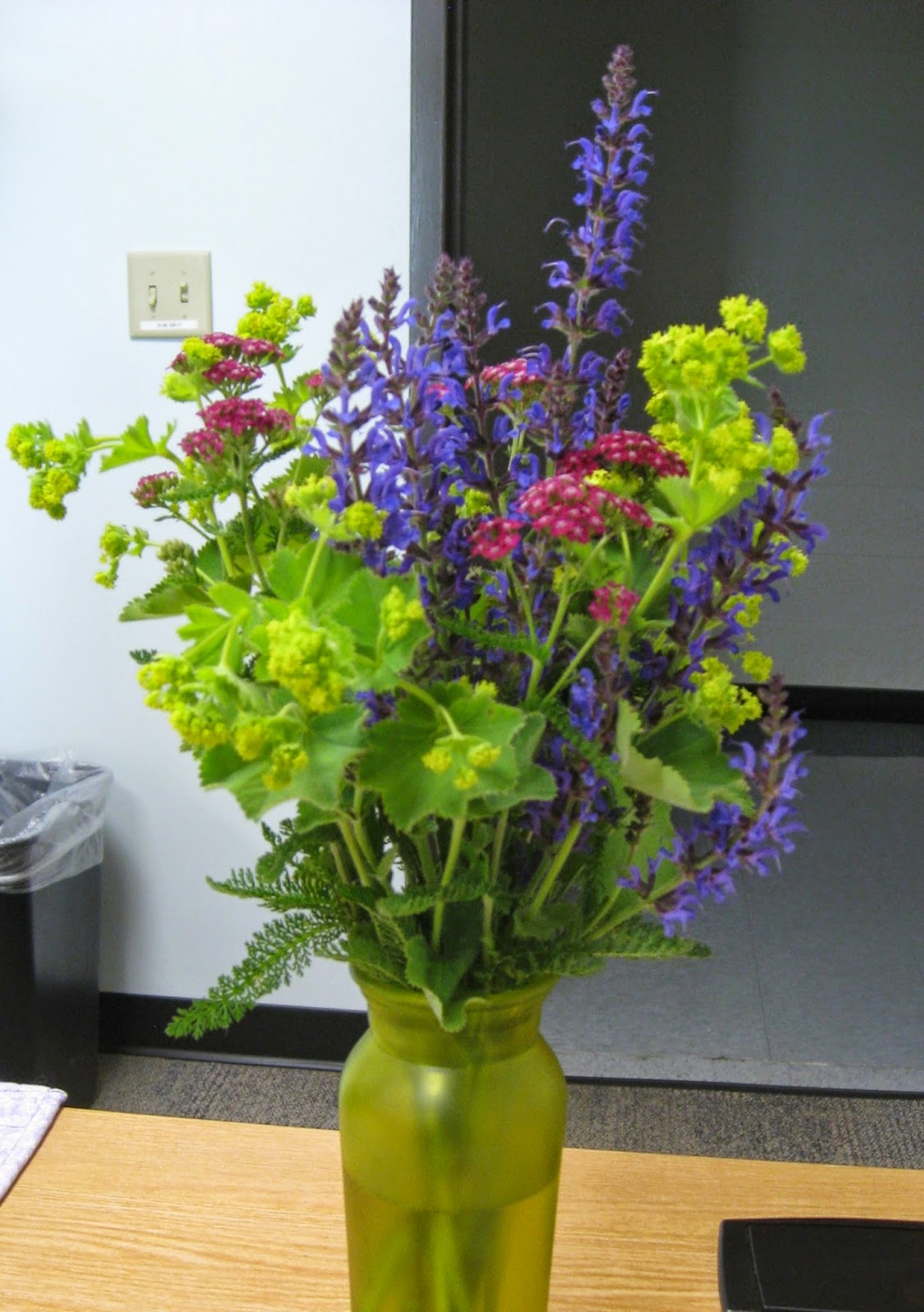 I've spent a lot of time in the gardens the last couple of weeks, trying to make up for lost time earlier in the spring.  Sadly, by the time I get around the biggest bed, it's time to start all over.  And that's only that one bed.  There are gardens everywhere at my house!  But I do it because it gets me outside, gets me some exercise- and I get pretty flowers!
This is the bouquet I brought to work for this week.
(Salvia, pink yarrow and Lady's mantle)


I read an article in the paper a week or so ago (I read it on my ipad, but still call it reading the paper) reported that 89 million to 340 million birds suffer fatal injuries from vehicle encounters annually.  The report will be published in an upcoming issue of The Journal of Wildlife Management.  According to this article, wind turbines account for FAR fewer bird deaths, at a quarter to a half a million. And yet, opponents of wind turbines point to bird deaths as a major concern.  Are these same bird lovers raising any hue and cry to get cars off the road?  Of course not.  It's just one example of how the mind sets of people need to be changed before we can make any real changes to protect/ save our environment!

I am grateful for:
Some much-needed rain, which came late in the day and didn't spoil anyone's plans!
Small bits of sewing time.
My husband, who is willing to join my insanity at times.
Laughter
Good sleep, when I can get it.
Posted by Martha Lorshbaugh at 12:38 PM