I goofed.  I didn't take enough pictures before I put this together.  This year's challenge theme was " show us your best blooms".

There is also a fabric component to it. Naturally I don't have a picture of the fabric, either.  Sorry the picture is sideways- I took it with the phone and some of those refuse to straighten up!  Anyway, the challenge fabric is circled.  It has been altered a bit.  (Mine is still recognizable.  Some of the ladies altered it so much I had to really hunt to find it.  There should be a prize for the best camouflage!) 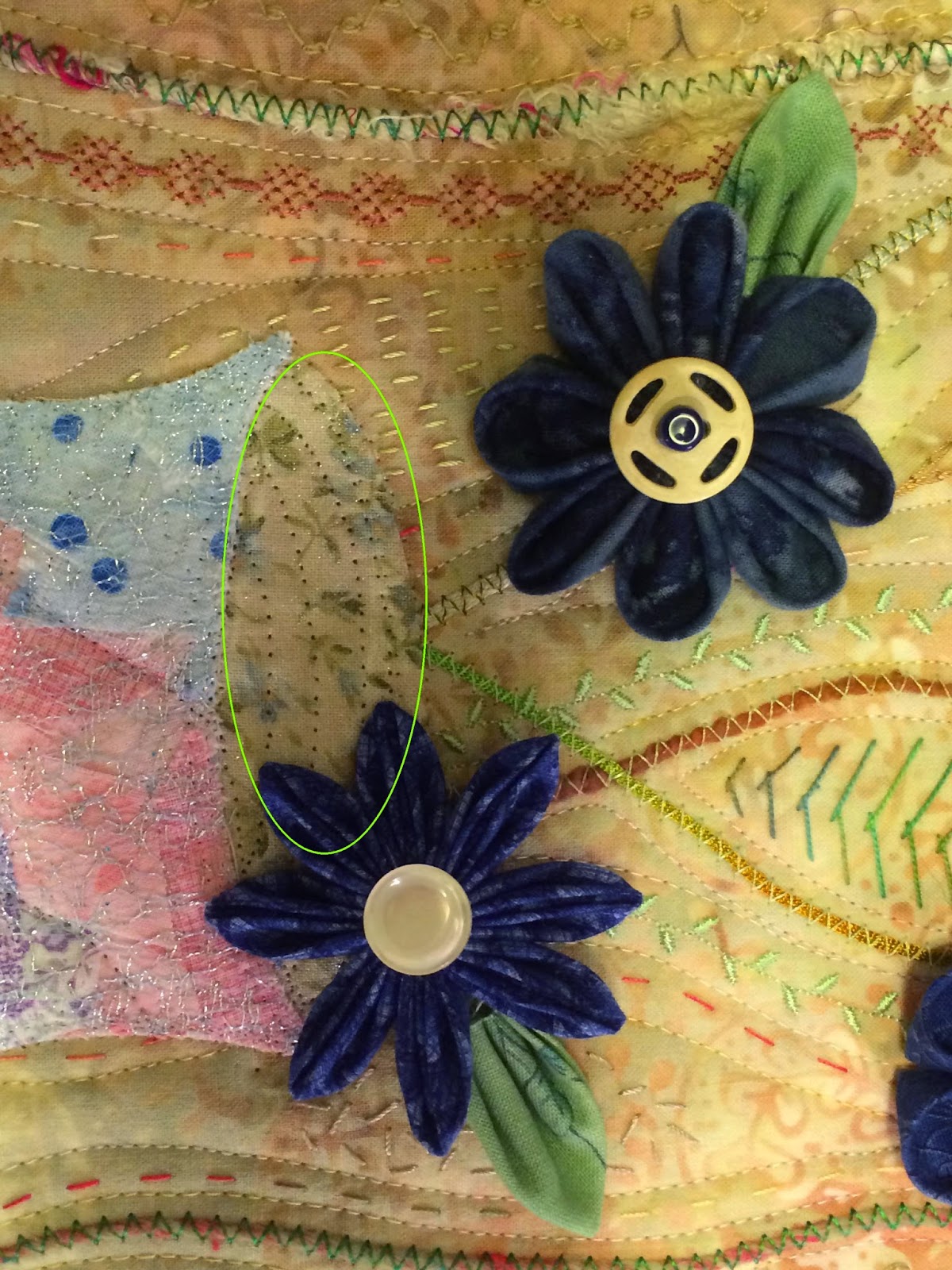 Anyway, this piece uses techniques from three different books- four if you count the crazy quilt book I referred to when I did the hand stitching!
I made dozens and dozens of the "Kanzashi" flowers a couple of years ago, and saved the blue ones to be a bouquet on a quilt at some point.   Fortunately, I found the excuse to do it!
First I made the vase using tiny scraps of fabric and Susan
Carlson's Serendipity Quilts.

After auditioning it on several fabrics, I decided this background was the right one.  Next, I played with Carol Ann Waugh's Stupendous Stitching techniques- which I LOVE, by the way! I didn't think I would do much hand stitching on it.  But once I got started, I didn't want to stop.  The book tells you to stop 2 inches from the edge to prevent the hand stitching being trimmed off of the final quilt.  I think if I do this again I will know how big the final piece will be so I don't end up with the "empty" spots I have on this one. 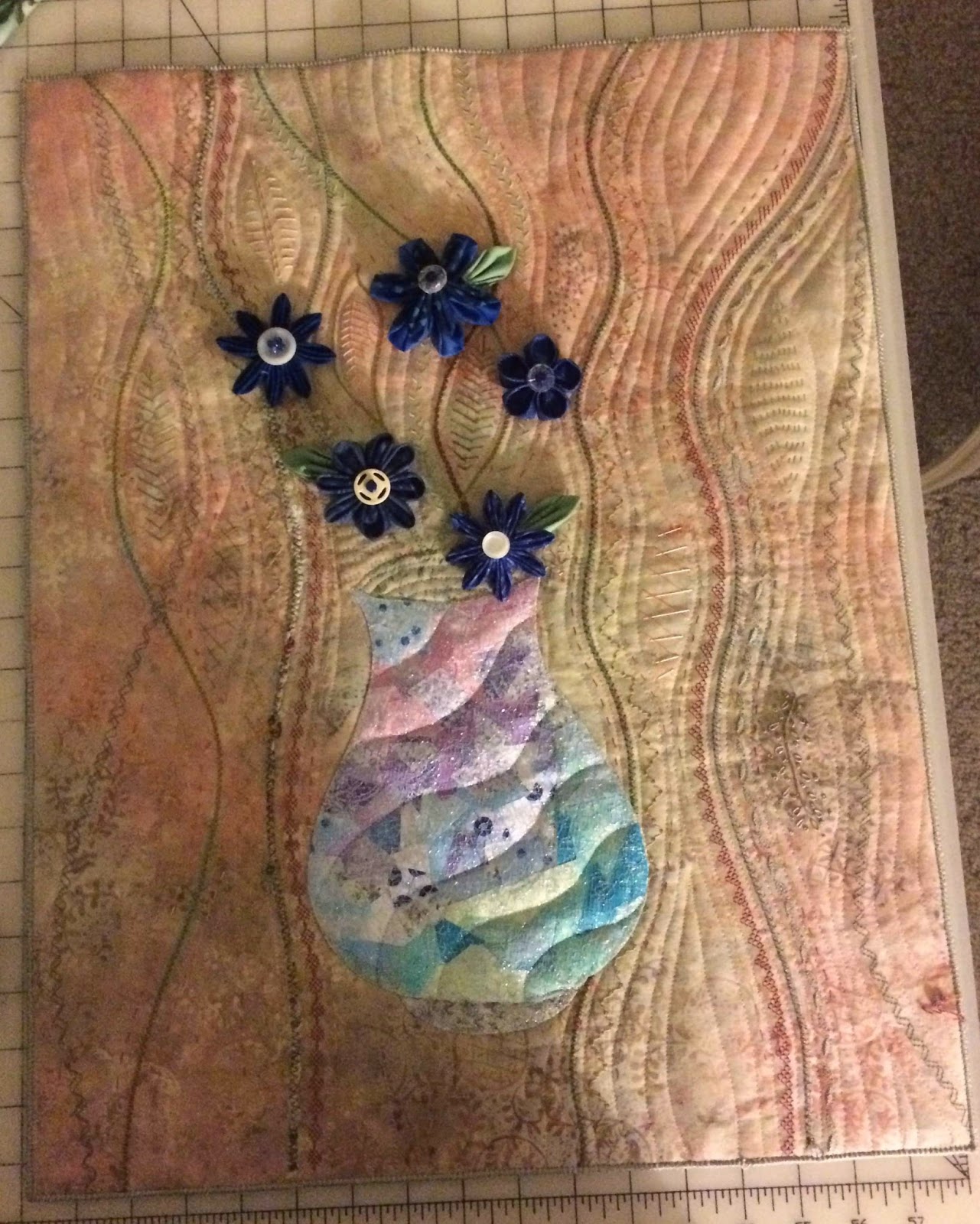 After the stitching, I appliqued the vase, layered and quilted.  I laid the flowers I had chosen on it and decided they were uninteresting.   So I tried some different ones, and was much happier. 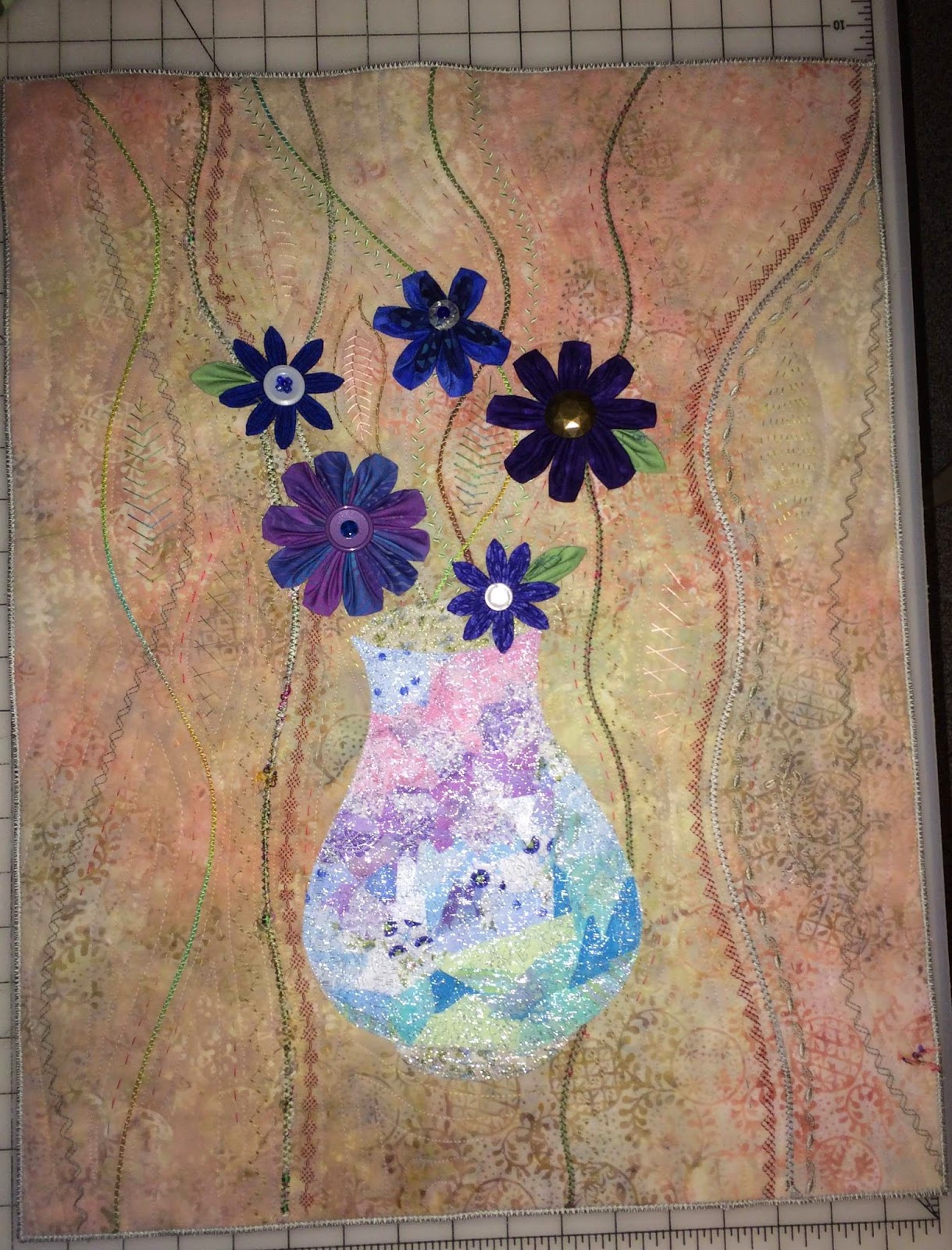 When I made the label, I had to come up with a name for the piece.  I decided on "Garden Jewels".  Jewels are sparkly, so I added some glitter! (which doesn't photograph well) 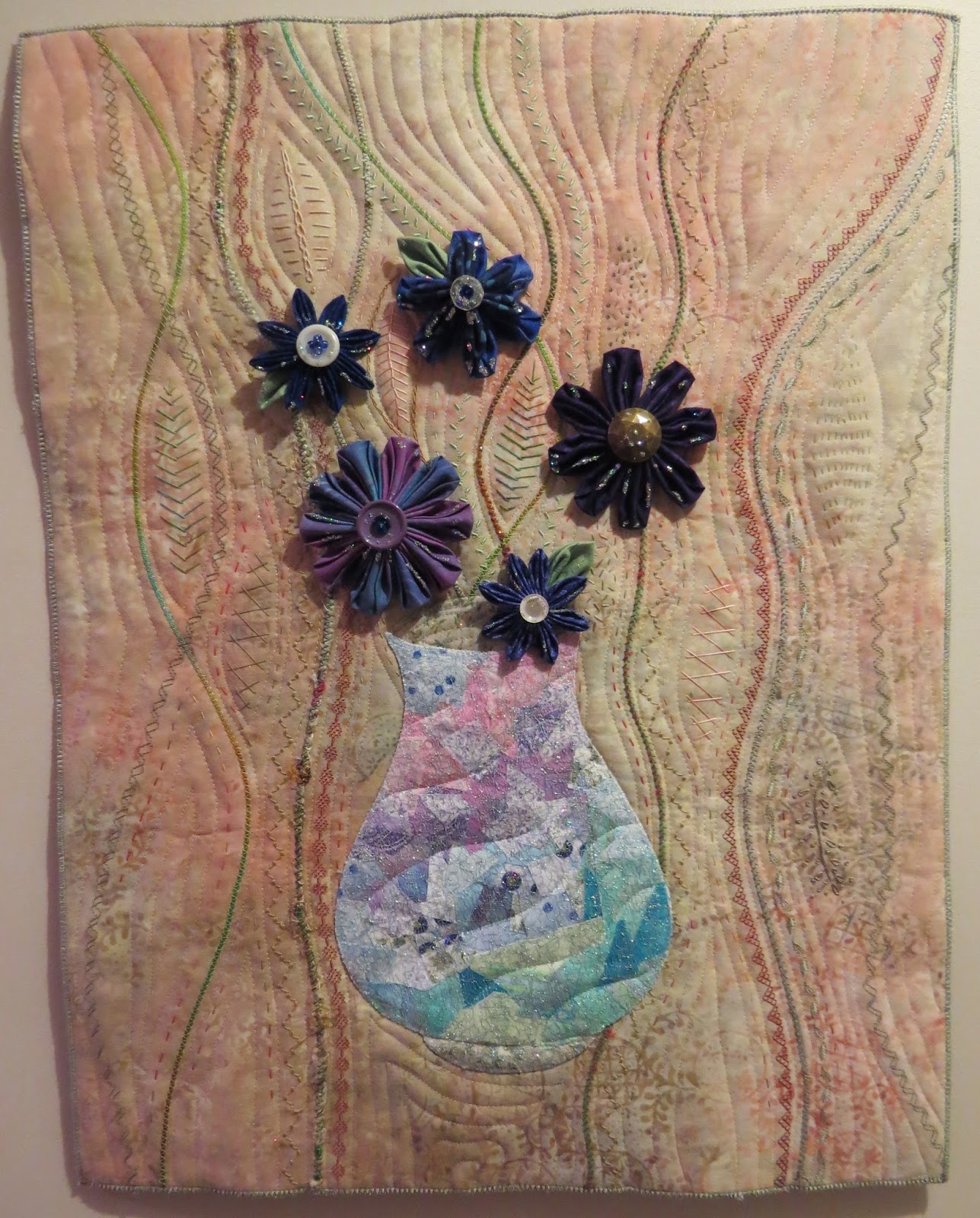 For my second entry, which I actually finished first,  I used some of my "Scrap Therapy" squares--Hey, I spent all that time cutting them, they have to get used up so my kids don't feel bad throwing them away when I die!!    The pattern is by "This and That".  It's a quilt as you go- very easy and a nice sized bag. 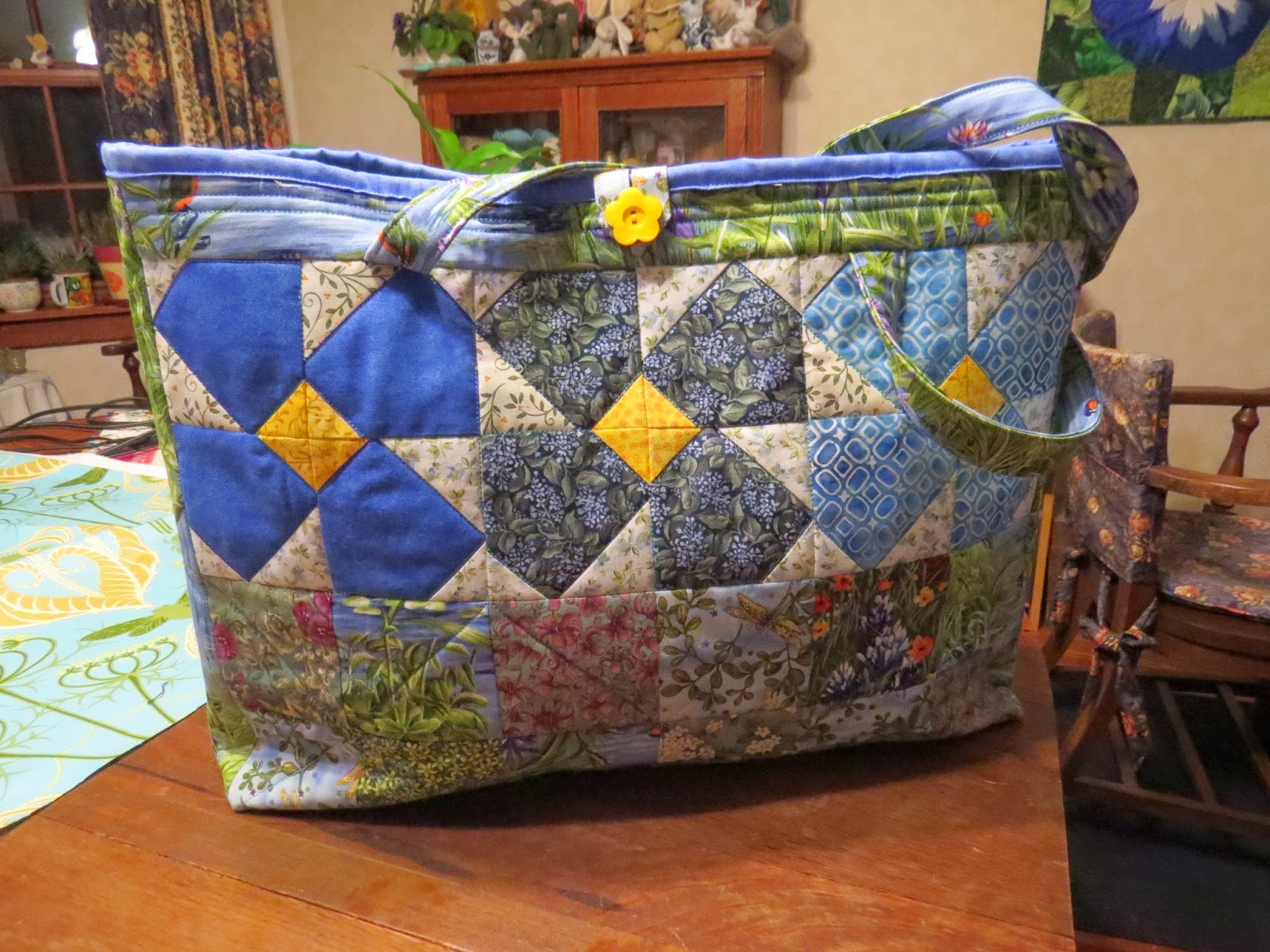 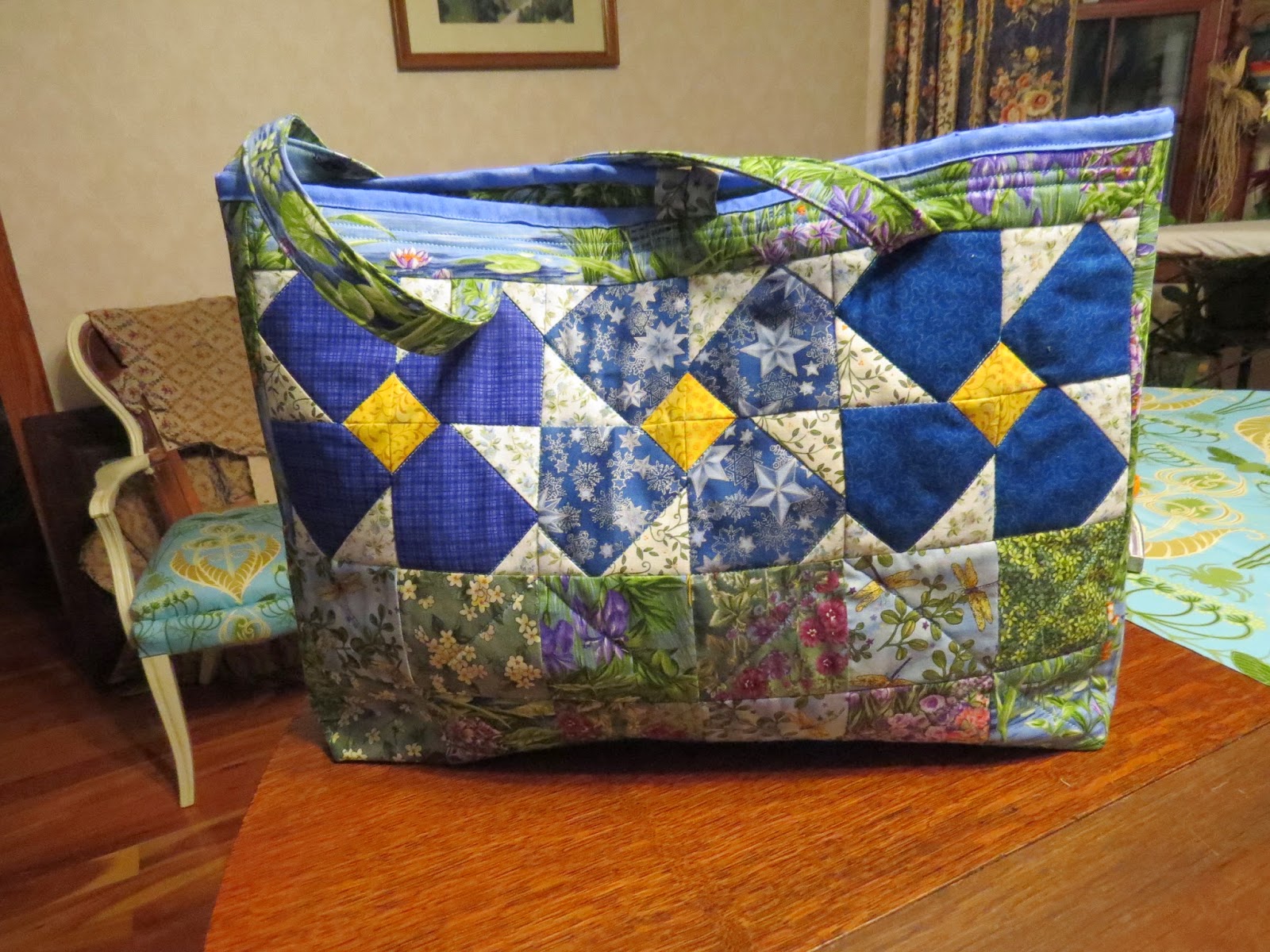 Here's some good news- the Senate has agreed that climate change is not a hoax.  However, there is still a faction who thinks it is not due to human activity. (sigh!)
In an effort to make this whole save the planet thing more real to you, here is some good news about recycling your cans.  Thanks- and remember to peel the labels off them and recycle that with your paper!

In case you are one of the 4 people I haven't told this to three or four times- I am going to be a grandmother in May!  It is a boy, but he doesn't have a name yet.  I have three quilts kitted up and ready to work on at retreat in February!!  And I haven't stopped smiling since they told us!

I am grateful for:
Perspective
Al is feeling well enough to be back at work.
The "have-to-dos are finished for a while.
Cats who don't mind getting a pill shoved in their mouth!
Sewing time

Posted by Martha Lorshbaugh at 1:00 PM