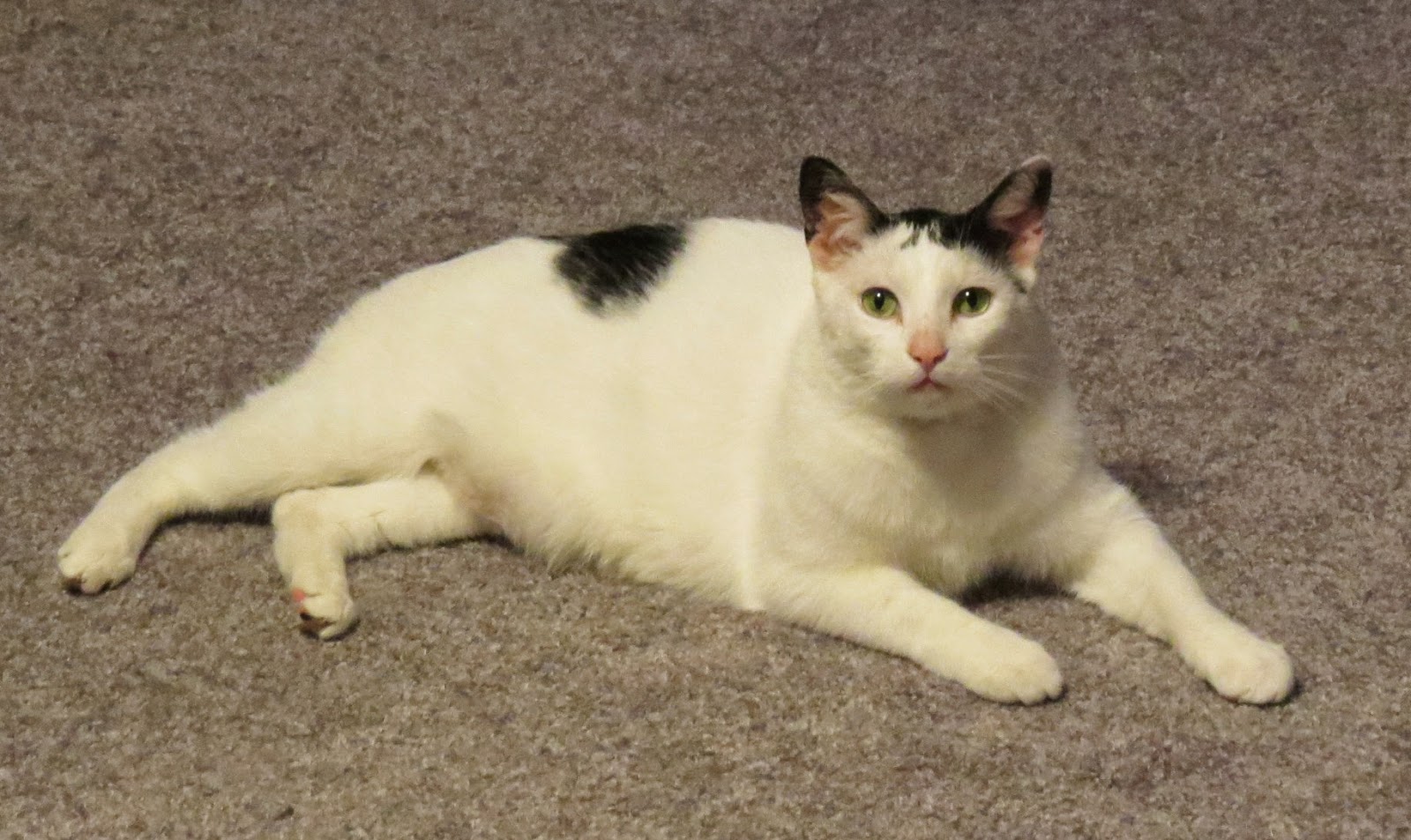 This is Tim/ Tina.  She was brought in to the shelter a couple of weeks ago- about three years after she was adopted from us.  There were at first conflicting reports of what had befallen this cat and lead to her being returned to our care.  One of the issues was supposed to be littler box issues.  ( I believe this is used as an excuse when people have no good reason to get rid of a cat they no longer want- second only to someone developing allergies)
Anyway,  I wasn't there when she was turned in.  But when I got there on my regular Wednesday at the shelter, I went to meet her and noticed the tiny stub of a tail and immediately knew she was part of my very first group of foster kittens!  I was so sure because I adopted my cat from that litter.  That's right- Tim (because she was and still is a very timid cat) is George's sister!!!

So, after a few days of keeping Tim in the "nursery" to make sure there weren't really any litter box issues, I decided to let her play with her sissy.  I don't know if cats have this kind of long term memory, but after an initial sniffing and watching each other phase, they are playing like they have never been apart! 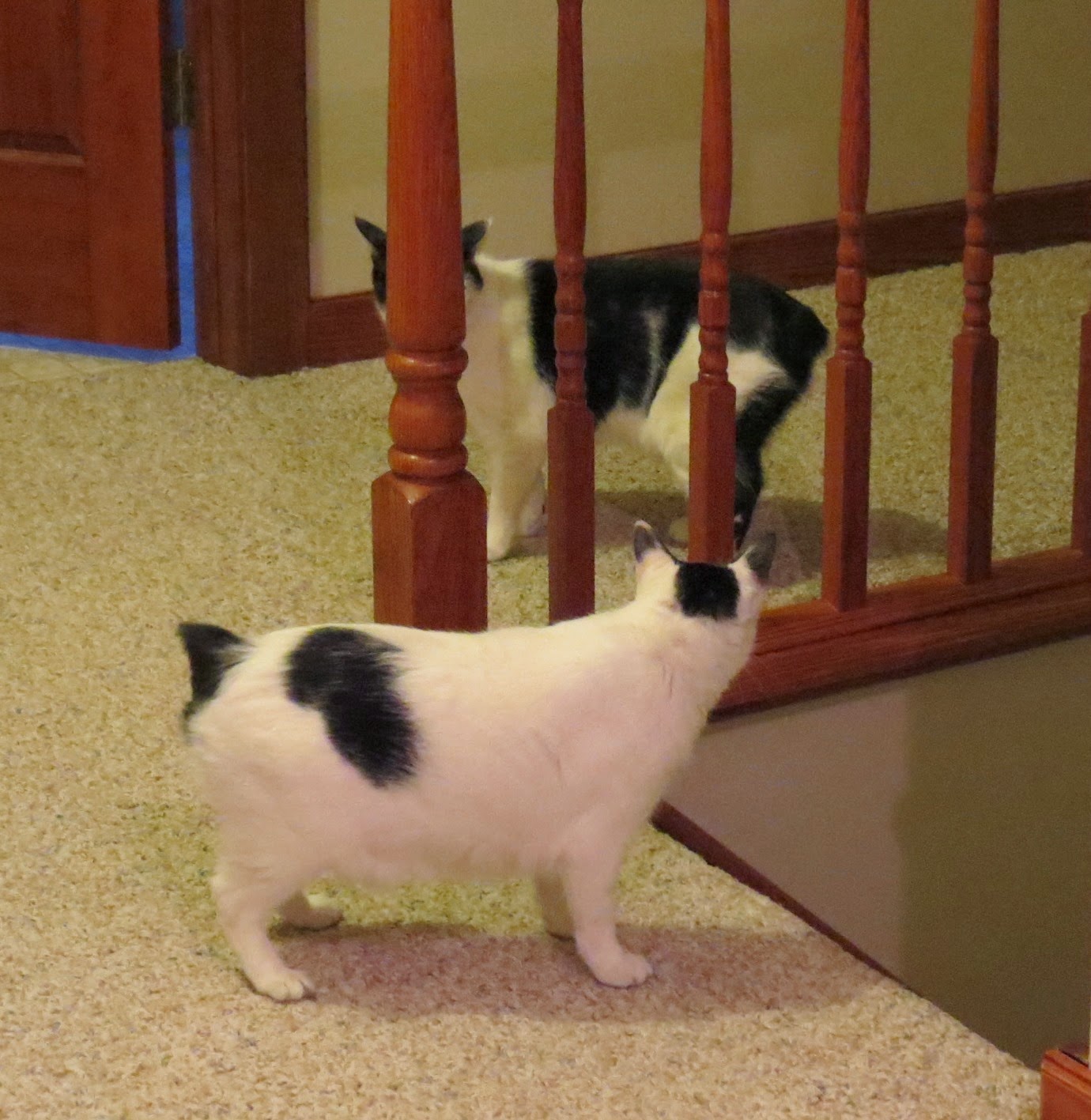 I tried to get a picture of the two of them together, but this was as close as I could get to that.  They lay in separate spots, watching each other very intently. As soon as one of them moves, they both run like hell.  It's hilarious but very hard to photograph.  I wish they could stay together, but I am allowed one cat and only one cat.  (sigh) 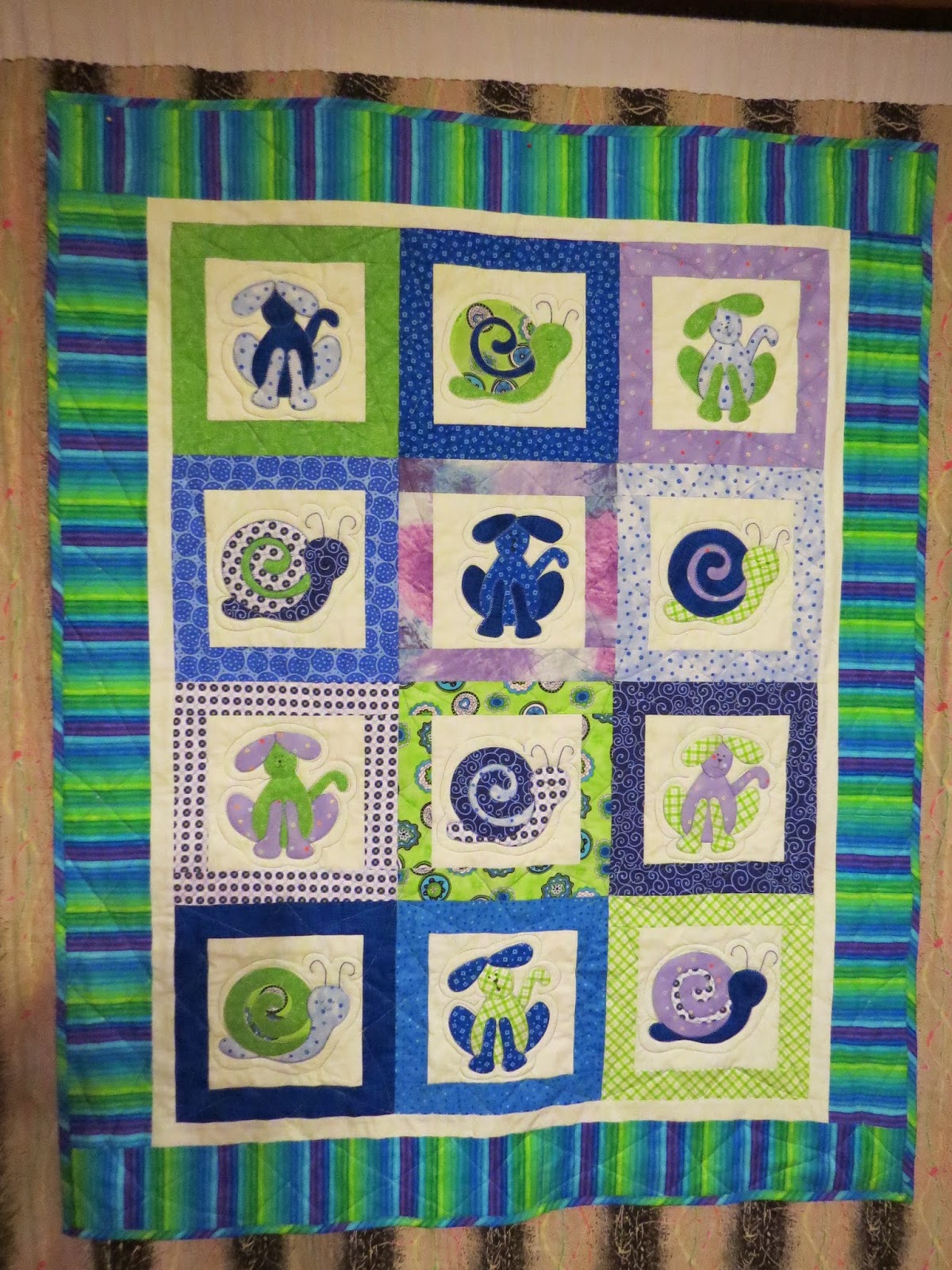 My grandson, who I hear will be named Jonathan, is a mere 7 weeks from making his appearance into the world.  I am still trudging along trying to get diapers made.  But I also finished his second, larger, quilt.  I call it "Snips and Snails".

I ended up drawing the faces on with pigma markers. 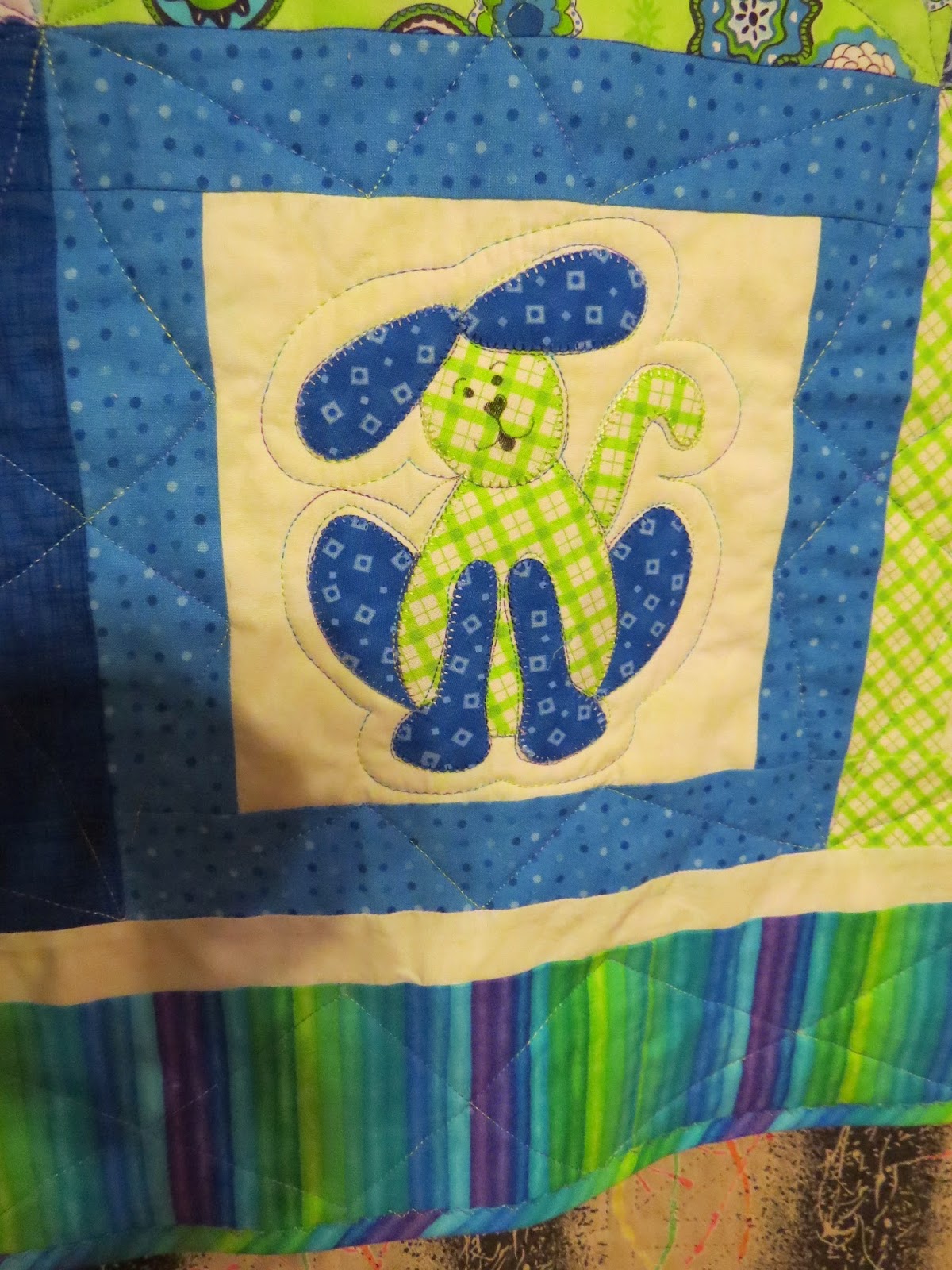 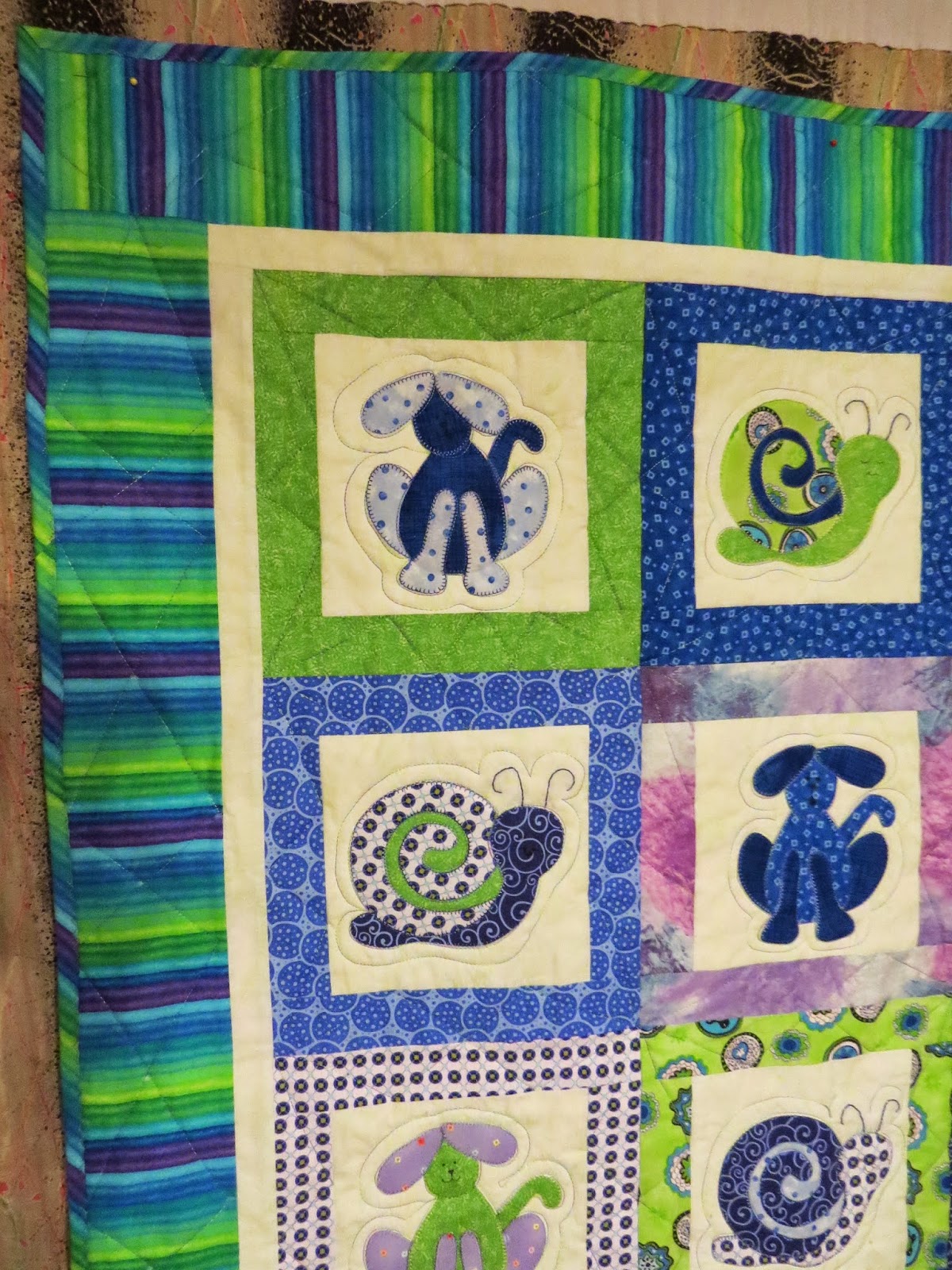 The quilting is m ore minimal than I usually do to keep it soft for him. It has a flannel back and Grampa Al wanted to keep it for himself!


I was thinking this morning that the first Earth Day was 45 years ago.  In 45 years it seems like nothing has changed.  The planet is in more trouble than ever (just ask the people in California!).  I will admit that the concern has become more widespread and at least there have been some steps taken.  I doubt it will be enough to prevent the damage from becoming much worse before it gets better.
But there are folks out there trying to create big changes.Check this out!  Solar highways- can you imagine!  The video is amazing- they want to use garbage as a raw material!!!  This is the kind of innovative and sustainable technology the planet needs.  I pray every day that someday the folks in charge will wake up and support these ideas.  I fear it will not happen in my lifetime.

I am grateful for:
A real go-outside-with-no-coat-and-enjoy-the-sunshine Spring day!
Watching George and Tim play
The very nice people who work with the elderly where my aunt lives
Sewing room time
Passing on precious family mementos- and the love they carry-  from one generation to the next


Posted by Martha Lorshbaugh at 11:31 AM