29 days until it's due and I haven't even decided what I'm making!

If you are a fellow member of the Museum Quilt Guild, you may know exactly what the title of this post is about.  Our annual challenge is due at the January 16 meeting.  They are always due in January.  Every year since I joined in 1999.  (And, like the Holidays, it still sneaks up on many of us every year!!!)
I have done at least one every year since 2001.   This year, I'm not so sure.   I usually start around August. But, I have done SO little sewing, and am SO far behind, that I'm not sure the Christmas gifts will be finished on time, either!
And it's not that I don't like the theme- Architecture- or have any ideas, because I do!   In fact, I have too many!
After a class with Jane Sassaman some years ago, I started looking at art and architecture books for inspiration.  (Jane calls it a visual bibliography).  One of the first things I realized, is that I love Islamic architecture.  Specifically, I like the gloriously embellished buildings like this.

So that was my first thought- to find something somewhat quilty to use.  Lo, and behold, the Tentmakers of Cairo book was available at the AQS show in Lancaster last spring, not long after the theme was announced!  Some of the patterns in there would fit the theme!  I just need time to find the right fabrics.

Then I remembered the fabulous building I used as inspirations for Guy's quilt, which I thought was pictured on the blog somewhere, but it's older than I realized!! 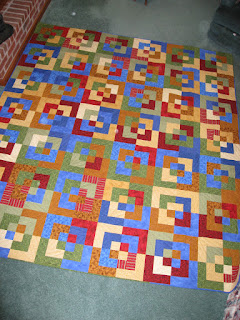 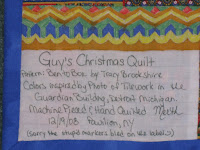 And here is a picture of the Guardian Building in Detroit.

I only used the colors for that one, but always meant to go back and try to replicate some of the patterns in the tile work.  Maybe now would be the time?

Then I saw this one in a book I borrowed from the college library. Isn't that awesome???  It's the Hoechst AG Technical Administrative Building in Frankfurt-Höchst, Germany, designed by Peter Behrens. It was a dyeworks and they wanted the bricks to look like the dyes.  How on earth to do this in fabric?  And time is running very short!!!

When I figure out what I can accomplish in the time I have, I'll let you know!  Lisa Boyer once wrote a column about coming out of the studio after sewing for a deadline- where there is moldy food, a refrigerator she can't bear to investigate, and a family who barely recognizes her.  (It is called "The Quilt Aftermath, in her book "Stash Envy".)  I see the events she describes in my future...

I was wrapping presents yesterday and noticed that I have finally started to use up the lifetime supply of wrapping paper I amassed when the boys were little. (You have to have new paper for Santa every year, you know)  Most wrapping paper is not recyclable.  So I will have to look for alternatives to wrapping paper when I finally run out. Personally, since I stink at wrapping, I like gift bags, which can be folded up and reused again and again.  Maybe I'll even make a few quilted ones to use for family, since I know they'll let me have them back.

I am grateful for:
Kiara wanted to sew to make something for mommy.
There was only one deer who needed to cross the road in front of me!
I goofed, not them, so there's a bonus coming!
The guild ladies liked my dorky trees.
Al pays attention when I tell him about things I am dreaming of.

Posted by Martha Lorshbaugh at 6:44 PM