Busy and weird, but I got to sew 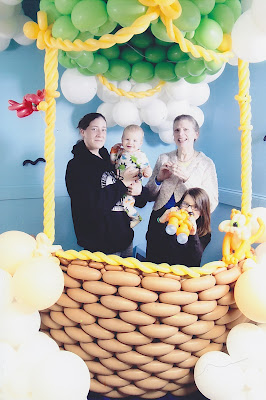 We're making all the plans and reservations for our vacation in March (meaning I have spent hours at the computer and hubby handed me his credit card).  One of my foster kittens became suddenly very sick again- after having seemingly recovered completely from the respiratory infection had had when I got them 2 weeks ago- and later died. My boss has made going to work a complete crap shoot because I never know if I'm getting Dr. Jekyll, or Mr. Hyde.
So my stress/ anxiety level has been pretty high. (deep breaths...in...out... now, wine!) 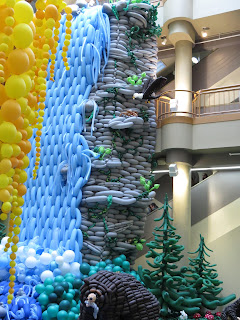 But there was really good stuff, too.
I took Cait and the grandkids to the "Airigami Adventure" in Rochester last weekend.  It was a 5 story sculpture  consisting of over 40,000  balloons. 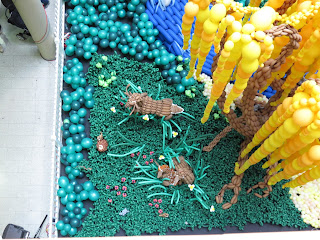 It was really cool!  And Jonathan had so many things to look at! But he stopped to look at me once or twice. 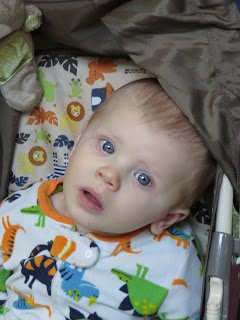 And I did get to sew.  I have been trying to get a kitty placemat made for quite a while now, so I have a neat place for the kitty dishes.  Finally, I had time to open my box of random strips and scraps.  I found some that went with the partial squares of this panel and just had fun.

When I got it ready to quilt, I decided to try my hand at micro quilting. 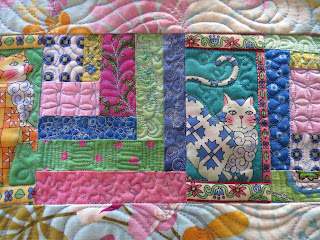 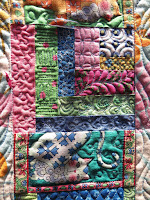 This little picture (left) is to show the scale- see the paper clip? 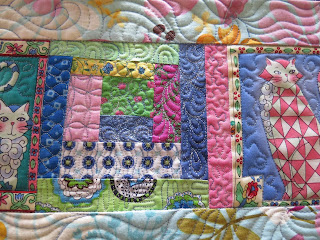 It's kind of fun, but takes a lot longer than just stippling the whole thing would have!  Those ladies who do this on full size quilts have moved way up in my regard. 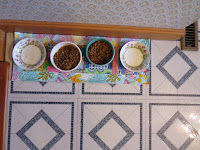 Here it is with the dishes, and then Marigold came along for a snack! 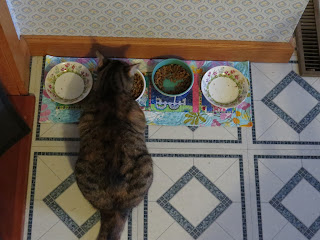 I'm up to May on my Johanna Basford calendar. 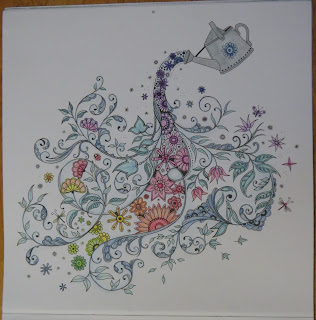 If you want to color, but  maybe flowers and animals aren't quite your cup of tea, check out the swearybook!!  I think he's still offering it for free here!

Did you watch the Superbowl- or at least the commercials?  First, if you missed it, I was very pleasantly surprised by Lady Gaga's singing of the national anthem.
Then, check this out- Levi's stadium is powered by solar energy!!! The fossil fuel stranglehold on the world is coming to an end (I hope!!).   It CAN be done.

I am grateful for:
My BFF, who knows me as I am and loves me anyway.
Plenty of Jonathan time last week.
The people at Perry Pet, who got my poor baby seen even though they were booked solid.
The good days.
Warm feet, thanks to my rice bag.
Posted by Martha Lorshbaugh at 10:48 AM