Not quite a vision board, but... 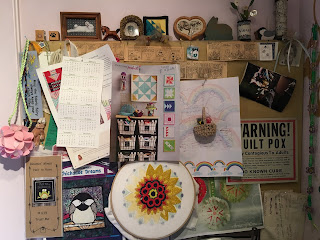 Recently on her blog, Lori Kennedy spoke about clutter in our sewing space, and the piles of ideas we all seem to have.  It made me think of the layers of crap pinned on my own bulletin board.

I never removed anything, just added to it, hanging new clippings on top of the old ones, patterns I want to do sooner rather than later, etc.  The sunflower is a beaded piece I stopped working on, but would really like to finish- so I put it where it would haunt me. :-)

But one grow accustomed to looking at the detritus and clutter and soon it's all just background noise.

So I pulled everything down and assessed it all.  Some went into the recycle bin.  A few bits and pieces went into the "parts department" for later use.  The stuff I kept doesn't tell any kind of story.  There's no vision of where I want to go next.  But it might help me focus on something. 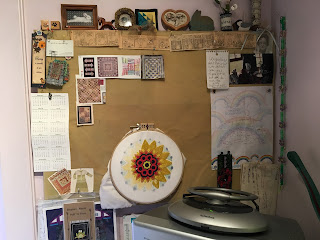 How about you? Do you have a pile of crap clogging up your creative thoughts?

Today is Earth Day.  It was started in 1970 with great enthusiasm for the changes we would make to stop the damage we were doing.  Everyone agreed it was a good idea at the time:

Earth Day 1970 achieved a rare political alignment, enlisting support from Republicans and Democrats, rich and poor, city slickers and farmers, tycoons and labor leaders. By the end of that year, the first Earth Day had led to the creation of the United States Environmental Protection Agency and the passage of the Clean Air, Clean Water, and Endangered Species Acts. “It was a gamble,” Gaylord recalled, “but it worked.”
- from earthday.org

Sadly, since then there has been a complacency among many individuals.  They think since they recycle their garbage, they're doing all they have to do.  They are wrong.
There has also been a major push back from the businesses responsible for the greatest share of the damage, via lobbying.

We have to keep making our voices heard.  Keep making better choices.  Keep this planet habitable for our children and their children.

I am grateful for:
My husband who makes me laugh.
A real spring day, open windows, and working in the garden at last.
Small bits of sewing time
My quilt guild, where I get to giggle with friends, enjoy show and tell and be exposed to new stuff all the time.
Fresh baked bread
Posted by Martha Lorshbaugh at 5:42 PM