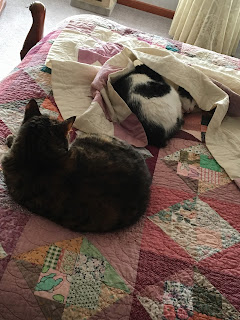 So this happened last weekend. The black and white cat, George, is the big sister who did NOT want a baby sister in her house.  (After spending three years waiting by the door of the kitten nursery so she could play with any who escaped.)  So, despite marigold's best efforts, she has never been allowed to share George's bed, or snuggle in the same chair with her.  But every so often she gets close.                           By the way, George paws at the covers on our bed so she can get under them to make herself a nest.  So we started putting a lap quilt on top of the bed after it was make to make it easier for her. 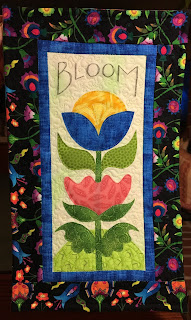 I spent a good bit of time in the sewing room last weekend!  I got that little Nancy Halvorsen piece finished and it has brightened up my little corner of the office. 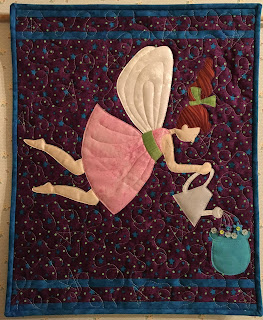 I finished another of the dreaded kits of the month.  I think this one was the one I liked the least of all of them.  It was designed as a tooth fairy quilt.  Really? But the quilt shop owners had supplied an alternate pattern piece they designed to make it a garden fairy.  Cue, but I still don't think I want it in my house.  If you like it, it will probably be for sale in the boutique at our quilt show in October. 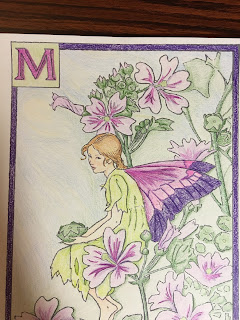 I discovered a picture I had halfway colored and left in a folder, so I finished it.  I had forgotten how enjoyable it is to spend time coloring.  I'll have to do more of it.
I also got the second quilt Kiara picked fabrics for quilted.  Maybe tomorrow after my play date with Jonathan, I can get it finished too!

"Some" people think all they have to do is sign an order and the movement to end fossil fuels will go away. But they would be wrong.  When a company as big as Apple is now powered by 100% solar, I think others will pay attention.

I am grateful for:
Letting go of old hurts.
Leftovers!
If you freeze brownies when they're fresh, then microwave them for 20 - 30 seconds it's just like fresh out of the oven again!
Crossing things off the UFO list.
In spite of the cold and the messy flower beds,  my crocuses are very pretty.


Posted by Martha Lorshbaugh at 7:38 PM