My recent success with the duffel bag gave me the courage to try and improve a quilt I made some years ago but never really liked. 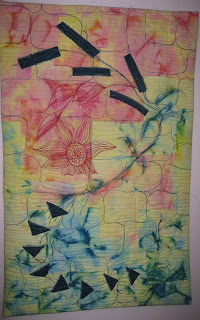 This is the original.  It was a project from the ArtCGirlz way back when the group was sort of in its infancy; called an "Instant Art Quilt".  Kathi brought the idea after seeing it on Ellen Lindner's blog or in a magazine.  I painted a piece of muslin with a sort of greenish yellow- which is way more yellow than I was hoping for at the time- with accents of pink and teal.  Once I arranged the bits, I decided it would be a plant growing out of a stone wall.  I thread painted the design on it and titled it "That Which Survives".  I ended up enjoying the process, but didn't love the quilt at all.  So, as I mentioned earlier this year, it went into the box of unloved quilts.

I recently came across it and pondered how I could have made it a more successful piece. So I dug out the paintstiks, and this is how it looks now. 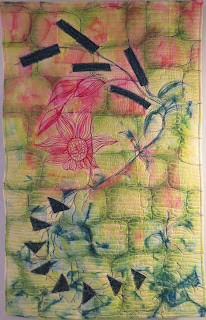 I added a subtle layer of light green over the whole thing, then used the darker green at each rock edge, hinting at moss growing between the rocks.  It's more interesting, but I still don't love it.

I apologize to anyone who tried to comment on the giveaway post and was unable to.  I did check the comment settings before doing that post.  But apparently I misunderstood the options. I chose the one that I thought meant you had to have a name and email address- not specifically a gmail account.  I wish I didn't have to do any of that, but you get spam posts if you don't make people prove they are people.  Sad, isn't it?

So last weekend we were talking about the hot dry summer we are enduring here, as well as some of the weather anomalies around the country.  I said "*#^!! you, climate deniers!"  But one of the other people at my table pointed out they had similar problems during the "dust bowl years", while another repeated the idea that climate change is cyclical.  I admit, I had no responses to these comments.  So I did some research.  I don't like to sound ignorant (as I often do) by trying to debate without facts.
I found out that, aside from the drought conditions, the dust bowls were due in large part to man's misuse of the land: (Excerpt of this article)
The Drought alone did not cause the black blizzards. Although dry spells are unavoidable in the region, occurring roughly every 25 years, it was the combination of drought and misuse of the land that led to the incredible devastation of the Dust Bowl years. Originally covered with grasses that held the fine soil in place, the land of the southern plains was plowed by settlers who brought their farming techniques with them when they homesteaded the area. Wheat crops, in high demand during World War I, exhausted the topsoil. Overgrazing by cattle and sheep herds stripped the western plains of their cover. When the drought hit, the land just blew away in the wind.

Some scientists are comparing climate change to the dust bowl.
I also read some interesting articles about the cyclical patterns.  This one is very long, but has some interesting sections, especially this point:

Where are we currently in the natural cycle (Milankovitch cycle)?  The warmest point of the last cycle was around 10,000 years ago, at the peak of the Holocene. Since then, there has been an overall cooling trend, consistent with a continuation of the natural cycle, and this cooling would continue for thousands of years into the future if all else remained the same. But since 1750 however, the CO2 content of the atmosphere has deviated from the natural cycle. Instead of decreasing, it has increased because of the fossil-fuel burning. Methane and nitrous oxide have also increased unnaturally because of agricultural practices and other factors. The world has also warmed unnaturally.  We are now deviating from the natural cycle.

People who don't want to believe man is destroying the planet will not be convinced.  To them I ask this question- Why risk it???
If even the smallest possibility exists that that we are damaging the ecosystem that supports life on this planet, Why risk it?

I am grateful for:
Rain yesterday- an inch in my rain gauge!
Spending time with some friends.
Some sewing time over the weekend.
Perfect timing.
Making someone else's day.

Posted by Martha Lorshbaugh at 4:01 PM