Now I Have Three

In 2014, when the Museum Quilt Guild last had a show, they decided some of us had entered too many quilts and asked us to choose which ones we most wanted to hang.  Many of the pieces I had entered were very small; a purse, a couple of the "creative girls", the piece I made in the Wendy Butler Berns class.  I withdrew all of those, plus I think my most recent challenge entry- which had been exhibited previously.  So this year, I decided I would not put too much effort into getting a lot of pieces finished for the show.  I have been trying to whittle away at the UFO list, though.  I've decided I will only show new pieces, as in things that I have never shown in another guild/ local exhibit.  I should have four ready by the registration deadline (Aug 20).  At present I have three.  The first is my fish, which was just in the AQS "Quilt week" event in Syracuse but has not been shown locally.  Second is my One Block Wonder.  And this one. 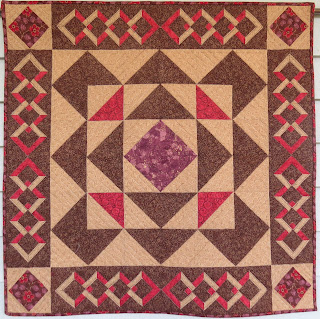 I made this using leftovers from a class I taught- bonus half square triangles!- and the borders were done for a demo using the double diamond ruler.  I got stuck- as so many of us do- deciding how to quilt it.  I decided just to doodle on it.
I have a big piece of clear acetate I can lay over quilts to help me audition quilting ideas.  (Be careful not to go off the edge with the whiteboard marker, though!!!) 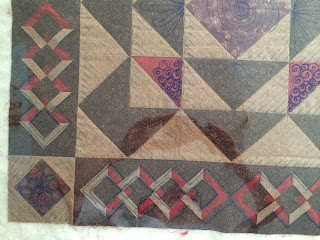 You probably couldn't see the quilting in the picture above where I hung the quilt on the wall.  I couldn't, so I took it out and laid it in the sun. 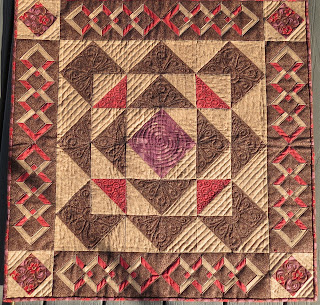 
It's finished, I had fun doing the quilting, and feel  like I get a bit better at it with every quilt.  (at least I hope I do!)


Whether or not you agree, plastic bag bans are making a difference! It takes some planning and requires creating a new habit, but if you can switch to using your own bags,  you may find yourself wondering why you waited so long!  Don't forget that you can also recycle most of the plastic bags food is wrapped in at the grocery store as well.

I am grateful for:
The kittens aren't hissing at me any more.
Reaching the halfway point of the hottest part of the year.
Chatting with Guy and Anna on my birthday.
Time spent chasing Jonathan around the back yard.
Kiara trying to get chickadees to eat from her hand.
Posted by Martha Lorshbaugh at 3:39 PM